Quick – What is the first word that comes to mind when you think of Hillary? 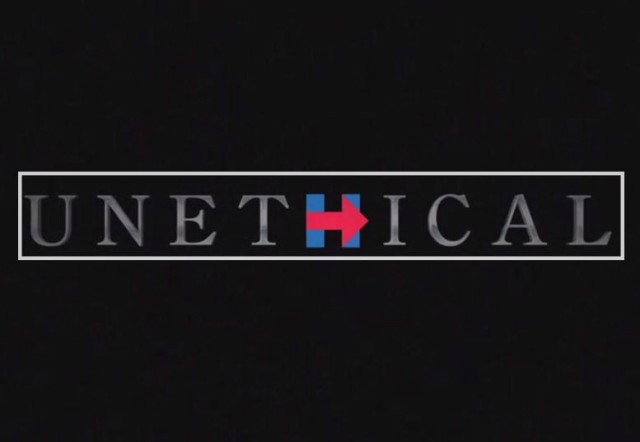 Hillary is Superwoman to Democrats.

But SuperWoman has a public perception problem to those who remember her before her repackaging.

The shadow government Email Server, deletion of records, and Clinton Foundation payolla, bring back the memories for us, but are new to the younger electorate. That younger electorate needs to know the real Hillary.

Which is why Republicans need to establish who Hillary Clinton is before the media machine and new Clinton War Room can start going after Republican candidates with vigor. For Republicans, Job One: Teach millennials about the real Hillary

SECRETARY HILLARY CLINTON: “I am very proud to be the President-Elect’s nominee for Secretary of State”

ANNOUNCER: “When Clinton was named Secretary of State, the White House asked the [Clinton] Foundation to shut the door on most foreign contributions to avoid any questions of ethics.

CLINTON: “There is not an inherent conflict of interest in any of my husband’s work, at all.”

JOE SCARBOROUGH: “They never play inside the lines. They just don’t.”

ANNOUNCER: “It raises the question of trust….”

SENATOR LUGAR: “…to ensure that the vital business of the United States’ Foreign Policy upon which the security of our nation rests.”

JUAN WILLIAMS: “Beyond the point of saying ‘ethically dubious, I think it’s unethical.”

SCARBOROUGH: “I think the Clintons are all about quid pro quo.”

LUGAR: “is not encumbered by perceptions arising from donations to the [Clinton] Foundation.”

ANNOUNCER: “Accepting donations from foreign governments from companies championed by the State Department while she was Secretary of State.”

CLINTON: “We must urgently begin to rebuild the bonds of trust and respect with Americans.”

Hillary’s favorability has been dropping steadily for months. 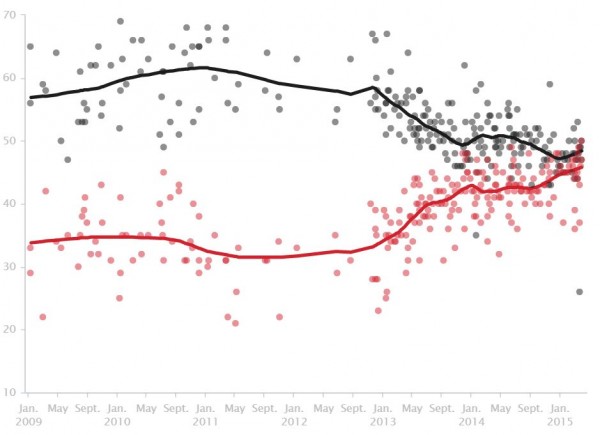 Her favorability may currently be higher than Republicans, but many Republican candidates are virtual unknowns to the national audience.

What’s the first word that comes to mind when Americans think of Hillary? It’s definitely not “honest”:

Americans appear to be suspicious of Hillary Rodham Clinton’s honesty, and even many Democrats are only lukewarm about her presidential candidacy, according to a new Associated Press-GfK poll.

Is she strong and decisive? Yes, say a majority of people. But inspiring and likable? Only a minority think so.

Clinton’s struggles to explain her email practices while in government, along with questions about the Clinton Foundation and Republican criticism of her openness, wealth and trustworthiness seem to have struck a nerve in the public’s perception of the dominant Democratic figure in the 2016 campaign. In the survey, 61 percent said “honest” describes her only slightly well or not at all.

Nearly four in 10 Democrats, and more than six in 10 independents agreed that “honest” was not the best word for her.

The U-Factor will be increasingly important.

first word?…… GRIFTERS… both her and billy

They repackaged Hillary but forgot to remove the “unethical” ingredient, instead making it a feature.

Eva’s pretty hands reached out and they reached wide
Now you may feel it should have been a voluntary cause
But that’s not the point my friends
When the money keeps rolling in you don’t ask how
Think of all the people guaranteed a good time now
Eva’s called the hungry to her–open up the doors!
Never been a fund like the Foundation Eva Peron!

Would you like to try a college education?
Own your landlord’s house, take the family on vacation?
Eva and her blessed Fund can make your dreams come true
Here’s all you have to do my friends
Write your name and your dream on a card or a pad or a ticket
Throw it high in the air and should our lady pick it
She will change your way of life for a week or even two
Name me anyone who cares as much as Eva Peron!

And the money kept rolling out in all directions
To the poor to the weak to the destitute all complexions
Now cynics claim a little of the cash has gone astray
But that’s not the point my friends
When the money keeps rolling out you don’t keep books
You can tell you’ve done well by the happy grateful looks
Accountants only slow things down, figures get in the way
Never been a lady loved as much as Eva Peron!

They asked her to “close the door” on foreign money. Done. She just left open the windows, sky lights, doggy door…

“We must urgently begin to rebuild the bonds of trust and respect among Americans.”
Well said.
Words have meaning.
Actions speak louder than words.

The B word, the C word, the L word and the T word.

You fill in those in anyway you choose.

Why pussyfoot around with videos attempting to educate the willfully ignorant?

Hasn’t she outright broken the law? Hell, what she did is specifically prohibited in The Constitution. Why not just cart the old whore off the jail?

“Hasn’t she outright broken the law?”

Well, yeah, but who are you hoping will prosecute?

The Holder DOJ? The Lynch DOJ? An “Independent” Counsel appointed by (read: from within) the State Department?

Nobody with the authority to prosecute her is willing to do it, and nobody willing has the authority. She knows it, and acts accordingly.

It’s the natural progression of a “rising star” in a political environment featuring the “rule of man” instead of the “rule of law”, fortified by a “legal system” instead of a “justice system”.

I’ve never understood how anyone could come under the spell of a the corrupt duo from Little Rock. But, look at all the twits who were and still are mesmerized by the uncharismatic Kenyan. I think there must be an inherent, almost religious desire by many to be ruled by a benevolent dictator, and many unscrupulous elites who encourage and take advantage of this desire. Our Founders and Framers were wise enough to know that there is no such thing as a benevolent dictator.

It’s all about Bill. When she was First Skank, she lived under Bill’s charm umbrella. As US Senator from NY, she did nothing, was invisible, merely filling a resume slot. As Obama’s Secretary of Foreign Bribes, that old Bill charm protection was deeply eroded. Now, as a presidential candidate, it’s all on Hillary and it’s going pretty much the way you’d predict. She’s a charmless no-talent chunk of desiccated dinosaur dung grasping for relevancy to millenials while fighting off a formerly protective media.

One thing he won’t stop doing: giving high-priced speeches, even though he acknowledges being a wealthy man these days, reportedly worth tens of millions of dollars.

“I gotta pay our bills,” he said. “And I also give a lot of it to the foundation every year.”

“I spend a couple of hours a day just doing the research. People like to hear me speak,” he said.

Reportedly, Ball-less Bill gives up to 10% of his income to is own “Foundation”/slush fund/influence bazaar.

I think Ball-less Bill is getting old.

Talk about a “First-World Problem”: Having to put in a “couple of hours a day” on research for a speech, for which you are getting paid $500,000.

For the mathematically-challenged, that’s a half-a-million dollars.

Which takes a “couple of hours” to research, and probably a similar time to write and give.

Poor Bill. He has a very difficult life. [/sarcasm]

Which takes a “couple of hours” to research, and probably a similar time to write and give.”

You can bank on the fact that he doesn’t write his speeches. The whopping 10% of his fee that he diverts to his foundation goes to pay someone else to write the speech. His ghostwriter and perhaps others do the bulk of the research. The ‘Toon can get away with a couple of hours or research because others are doing all the work.

Ouch! Hate it when folks hang back and sugar-coat things.

Hillary’s campaign slogan: Vote for Hillary. She hasn’t been convicted of any of her crimes.

Hillary’s campaign slogan: Vote for Hillary. She hasn’t been convicted of any crimes yet.