The Palestinians Continue Their War Against Israel in Soccer

The Palestinians Continue Their War Against Israel in Soccer

Will Israel Get Suspended from FIFA? 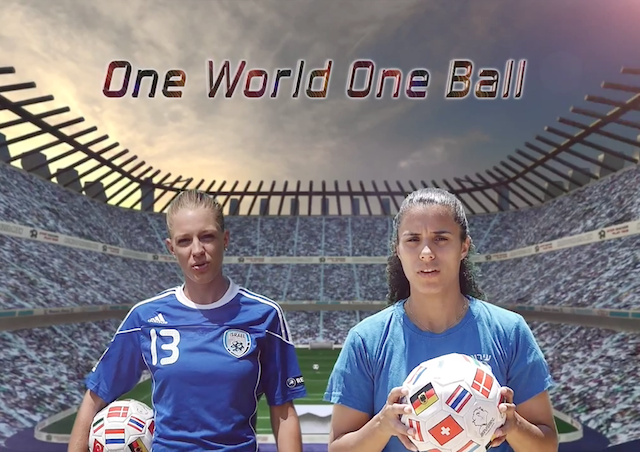 When in 1993 Israel and the PLO agreed to make peace, PLO chief Yasser Arafat committed to forswear violence and engage in bilateral negotiations.

The thousands of Israelis killed, especially during the so-called Aqsa intifada – really a terror campaign orchestrated by Arafat – show that the Palestinians didn’t keep to the first commitment. The ongoing lawfare campaigns against Israel in the United Nations and other international organizations show that they haven’t kept the second either.

The latest manifestation of this lawfare against Israel to make the news is the effort by Jibril Rajoub, head of the Palestinian Football Association (PFA) to suspend Israel from FIFA, the governing body of international soccer. Sepp Blatter, the controversial president of FIFA is trying to defuse the situation. He is also running for reelection.

At FIFA’s Congress later this month Rajoub wants to bring his motion to a vote. To suspend Israel would require a three fourths vote against Israel. The problem is that Israel has not violated any of FIFA’s bylaws. But that doesn’t mean that Rajoub won’t try.

In the latest issue of The Tower Magazine, Aiden Pink gives us a glimpse into Rajoub’s machinations.

But Blatter’s likely reelection is surprisingly not the most shameful issue on the agenda of the 65th FIFA Congress. That would be item 15.1: the proposal by the Palestinian Football Association (PFA) to suspend the Israel Football Association (IFA) from FIFA. The PFA is taking this action because, in the words of PFA president Jibril Rajoub, who is also a member of the Central Committee of the West Bank’s ruling Fatah party, “It is clear that the [IFA] is not willing to recognize the PFA as a federation with equal rights and obligations, just as they continue to violate their commitments made before FIFA. We are therefore determined to continue our path to suspend the [IFA] during the next FIFA Congress.” …

Blatter, for his part, is spending the weeks before this year’s FIFA Congress meeting with the heads of the Israeli and Palestinian football associations, and even with Israeli Prime Minister Benjamin Netanyahu and Palestinian Authority President Mahmoud Abbas, to whom he proposed a friendly match between the two national teams. Netanyahu was receptive to the idea, and told Blatter and reporters that sports “is a vehicle of goodwill among nations. The thing that could destroy the Football Association is politicizing it. You politicize it once with Israel, then you politicize it for everyone, and it will cause the deterioration of a great institution.” But a meeting with Abbas and Rajoub was less successful—“We will keep the proposal on the agenda [of the FIFA Congress] for sincere and open discussions by the FIFA member associations,” Rajoub said at a press conference following the Blatter-Abbas meeting. “There will be no compromising on free movement of our athletes and officials.”

Throughout this whole process, Blatter has reiterated his opposition to the anti-Israel initiative: According to a May 7 statement, “any member association that is fulfilling its statutory duties should not be suspended. This would also apply to the IFA as long as they fulfill such duties.” And on May 15, he decried the political, rather than sports-based, nature of the PFA’s proposal: “We want to be in sport and not in politics. This would be a very dangerous precedent.”

The problem is, as Pink writes, Rajoub is “one of the most virulently anti-Israel and anti-peace members of the Palestinian leadership.” Aside from being a former security chief for Yasser Arafat, with all that implies – corruption, abuse of power – Rajoub is likely trying to position himself as the next leader of Fatah after Abbas, and nothing succeeds politically among the Palestinians like anti-Israel extremism.

Despite Rajoub’s complaints that Israel has worked with FIFA to complicate the movement of Palestinian athletes, Israeli soccer teams (except one) all have Palestinian players. Israel, on the other hand, must play in the European soccer league because the Arab and Muslim countries in Asia refuse to compete against the Jewish state.

If Rajoub succeeds it will be one more black mark against an incredibly corrupt international organization. That Rajoub’s campaign has not been stopped shows the degree to which anti-semitism is still tolerated internationally.

#Soccer players of 3 religions in Israel gather to call to keep #politics away from the football fields. https://t.co/ipEsPqxkeK

AUTHOR NOTE: Work on this post was completed prior to the beginning of the Sabbath.

The Hamas teams should be banned from all sports.

“Israel, on the other hand, must play in the European soccer league because the Arab and Muslim countries in Asia refuse to compete against the Jewish state.”

Tell me more about this.

Do Arab teams simply forfeit whenever they are scheduled to play Israel, or does FIFA simply never schedule such games?

Yes, all the Arab teams forfeited rather than play Israel. Israel won the regional championship without playing a game.

That’s why Israel plays in the European association now. I think for a while Israel was assigned to the SouthEast Asia, but there were still problems with the Muslim countries there.

I read a long history about this recently, unfortunately I can’t find the link

Of course they will. FIFA, like most European organizations is filled with anti-Semites.

The sole purpose of the concept of “Palestine” is to eliminate Jews. It has always been that way and it will never change.

If anyone doubts your statement, let them answer two questions:

1) Why did the Arabs not create an independent Arab nation of Palestine during the two decades Jordan controlled the West Bank and East Jerusalem, and Egypt controlled Gaza? (1948-1967)

2) Why are Palestinians still in refugee camps in Syria, Lebanon, etc 70 years on, denied citizenship?

The text of the Hamas covenant needs to be brought to the attention Of FIFA in a public manner that they cannot ignore..

In particular, FIFA should be made to understand that the goal of Hamas is genocide, and that it is actively engaged in a contract to convince Muslims that they have a personal and religious duty to murder every living Jew.

Be sure that they read the many, choice bits.

This is somewhat laughable, given that FIFA is under indictment by the US government for RICO violations.