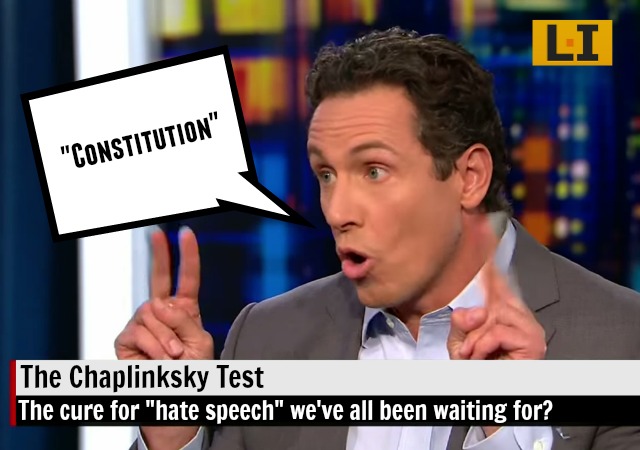 Whilst debating the merits of the first amendment, Cuomo fired off this misinformed statement:

it doesn't. hate speech is excluded from protection. dont just say you love the constitution…read it https://t.co/znZJ8cPvpX

Well, I’ve read the Constitution and I’m pretty sure no where in the first amendment or elsewhere is “hate speech” excluded from protection. “Hate speech” of course being the term progressives toss around any time words or phrases offend their delicate sensibilities or confront their requisite acquiescence to what Tom Wolff describes as, radical chic.

Thankfully, the Free Beacon’s Sonny Bunch was there to clear up the misunderstanding:

Guys! It’s cool. I found @ChrisCuomo’s copy of the First Amendment. We were wrong after all! pic.twitter.com/khB4duRMQf

But where? WHERE in this make believe Constitution is “hate speech” unprotected?! the informed public asked.

“@BenK84: Can you cite for me where hate speech is banned in the constitution? Please. Cite the exact text.” Chaplinsky bans fighting words

But then Cuomo kept going…

“@RBPundit: "Everyone is entitled to a unicorn. Don't just say you love the Constitution, read it." – @ChrisCuomo, basically.” Chaplinsky

“@ymanjoura: @ggreenwald @ChrisCuomo In Canada UK or Germany but not in US, this from a non US citizen!” Hate speech. Chaplinsky case 1942

“@FilmLadd: Apparently @ChrisCuomo missed the "dumbass speech prohibition" in the Constitution, too.” Chaplinsky. Now shut up

.@FiveRights valid cultural concern but not a legal one. "Hate speech" almost always allowed unless meets – wait for it – chaplinsky test

The Chaplinsky Test. Well, why didn’t someone tell us sooner!

Probably because Chaplinsky isn’t a detriment to free speech. The skinny on Chaplinksy vs. New Hampshire is pretty straightforward:

Chaplinsky, a Jehovah’s Witness, called a city marshal a “God-damned racketeer” and “a damned fascist” in a public place. He was arrested and convicted under a state law for violating a breach of the peace.

Does the application of the statute violate Chaplinsky’s freedom of speech protected by the First Amendment? No. Some forms of expression–among them obscenity and fighting words–do not convey ideas and thus are not subject to First Amendment protection. In this case, Chaplinsky uttered fighting words, i.e., words that “inflict injury or tend to incite an immediate breach of the peace.”

And then the backpedalling began:

.@gabrielmalor who over looked it? Chaplinsky is the one carve out. Period. I never said it applied to #Garland. EVER. so now what?

.@BonkPolitics what is my lie? Fighting words are the hate speech prohibited. I didn't mean ALL hate speech

For last time (today), I didn't mean the language of 1A, I meant the case law. And hate speech has been protected except for fighting words.

Dogma prevents the Cuomo’s of the world from admitting that the abject hatred which propels a would-be jihadi to attempt murder over a cartoon is pretty jacked up. There must exist a reason for the behavior, and that reason, at least in the instance of the Garland shootings, is certainly provocation by the culturally insensitive. And so the Cuomo’s of the world in turn, become terrorist apologists.

When the politically correct mob comes a knocking for the “there’s a fine line between free speech and provoking people” crowd (and no one is immune), maybe then they’ll understand. Maybe.

I’m thinking of starting the First Church of the Holy Constitution.

We consider statements against rights enumerated in the Bill of Rights to be deeply offensive and blasphemous.

Naturally, I don’t hold with the fundamentalists who would do violence to protect our Holy Writ, but I do understand them.

People like Chris Cuomo need to understand that “Hate Speech isn’t Free Speech” is deeply offensive hate speech, and is likely to lead to violence.

People like Chris Cuomo also need to understand that when violent Islamists publicly vow to execute all infidels and pledge “Death to America”, “Death to Jews”, and “Death to Israel”, that’s just as much “hate speech” as any Mohammed cartoon.

Even more so, in fact; it’s becoming a credible threat. It is, therefore, NOT protected speech under the 1st Amendment, Chaplinsky or no Chaplinsky.

This is how the Danes gave up free expression. In the name of “public safety”.

Put me down for a risky life, and leave my freedom alone. I’ll fill in the open spaces.

The old man was wrong on policy, but he was not stupid. I have to conclude that any hybrid vigor Mario had did not get passed on to his kids.

An interesting piece on the origin of the concept of “hate speech”.

Not surprisingly, it was the Soviet Union. That 1984 book was pretty on-point.

Dear Rags… thank you so much for this useful link.

Imams are politicians under Islam and Sharia is the exclusive source of law. That is, we are just as free to criticize and mock them as we are any politician or candidate and any law or proposed law.

More importantly, even if each Imam were the equivalent of an Islamic Pope, we’d STILL be free to criticize them.
You seen anyone in America pull their commentary punches for fear of offending the Pope?
Me neither.

Someone should explain to Chris Cuomo “The First Rule of Holes”

He doesn’t seem smart enough to figure it out himself.

Megyn had Eugene Volokh on tonight for a good segment. He didn’t view this event as hate speech, and observed a vital purpose.

Worth watching. Volokh does know his 1st (and 2nd) Amdt. jurisprudence to a level that a Cuomo could only dream about. It was a good interview, and it reminds you that Kelly was a decently good lawyer before she became a talking head, in the way that she discussed the subject with EV. Back to him though – Kelly essentially asked him to say that Cuomo was an idiot. Volokh, as is his style, essentially ignored that, simply said that Cuomo was wrong, then went on to make his point, without ever questioning Cuomo’s intellect, credentials, honesty, etc., which is what Kelly had, I think, been angling for. Which is, maybe, one of the interesting things about Volokh, that he so strongly supports the sort of speech that he would never engage in (being one of the nicest and most civil people I have ever met, setting an example in civility that I try to emulate).

Converting to Islam does have its perks…murdering people who offend you is one them.

Even Salon and Vox have taken him to task for this stupidity.

Gee, where is the ACLU on this? Can’t forget those hypocritical bullsh-tters throwing in everyone’s face how they will always defend marching Nazis.
https://www.aclu.org/about/aclu-history
But not a Jewish woman holding a art show. Though they did love “Piss Christ.”

Everything about the left is a b.s. — starting at the top.

Modern ‘liberalism’ is a fascist movement — and a cult full of an astounding number of ignoramuses. Example, Cuomo. This bozo is probably high on the list of force-lecturers of the guests of FEMA camps, guarded by street gangs armed by Obama.

Too busy counting their billions of dollars of money?

I’ve read the Constitution many, many times and I’ve yet to see a version that states: Congress shall make no law, EXCEPT…..

Perhaps I’m just some stupid rube but it seems to me the words “shall make no law” and “shall not” are a direct prohibition on the Congress, not a mere suggestion. Of course I’m not a lawyer so I was taught that words have specific meanings.

Yes, Sanddog, I’ve often wondered about that “EXCEPT” part too-

Also about that other Amendment, y’know the one we don’t need anymore because modern, that ends “…shall not be infringed.”

“…Not be infringed.”- well, that phrase just don’t mean nothing at all. Nothing.

Just ask any of the talking heads.

Time for a “Draw Obama” contest?

I know this isn’t fair but I’m getting to the point where I really despise the name Cuomo.

Chaplinsky isn’t even the standard anymore. Street v NY and Snyder v Phelps (Westboro Baptist case) narrowed the definition of “fighting words” essentially to personal insults, face to face. So those who come looking for you because of something you said, no matter what it is, won’t ever get that exception.

I am disgusted with those who say, “Free speech, BUT” as if that were possible. You have freedom of speech, or you do not.

See? That picture of those kids is “provocative” and “incendiary”.

“Hate speech” can be anything you get enough haters to say it is.

Strikes me that Chris Cuomo is a God damned fascist. Maybe a racketeer too, I dunno.

The media does not practice “free speech” and neither can the media understand the concept of “free speech.” Such is foreign to them.

It would seem Eugene Volokh would have settled the issue mostly, on whether there was value to this meeting, but O’Reilly is still doubling down.

Bill says Jesus would not have down the event, so now he’s speaking for Jesus, as well as the Muslims. But after Jesus confronted the Pharisees, for having all “had” the woman in red, I would say he sort of mocked them, with a serious point.

I know that ye are Abraham’s seed; but ye seek to kill me, because my word hath no place in you.

… Ye are of your father the devil, and the lusts of your father ye will do. He was a murderer from the beginning, and abode not in the truth, because there is no truth in him.

So 700 years later along comes Mohammad and another group of murderous “church” leaders. Mohammad’s Marauders murdered all the way to Spain. Today those Imams call for murder of people like Rushdie or Geller, who say what the radicals will not hear.

The point now is not just to mock, but to speak truth freely, and refuse to submit. But O’Reilly is doing a “push poll”, asking if people support Geller’s group “mocking the Islamic religion”.

But there were a couple hundred entries, they were not told to mock, but to draw Mohammad. They made a lot of good and educational points, and Volokh even applauded the winner. O’Reilly can never admit he’s wrong.

just a little side note, the adulterous woman, they all had her (from what I recall from way back), and Jesus told her to go and sin no more. But the Pharisees were trying to trap Jesus, saying the law says to stone her. This is when Jesus said “let he that is without sin cast the first stone”.

So as with Islam, the men had her, or at the least had guilt, yet they wanted to stone the woman. They “caught her in the very act” … with whom? Themselves? The law condemns the man (men) as well, but they just brought the woman. Some things don’t change I suppose.

Phone Bill’s push poll was so egregious that I for the first time bothered to find it and vote — for Pam, of course.

Question for da lawyers. If fighting words are verboten, do they provide a license to the provoked person to assault the speaker in any way? The “sticks and stones” saying of my youth taught me that words of others were never an excuse for fighting.