Are these bans more wide-spread than we know? 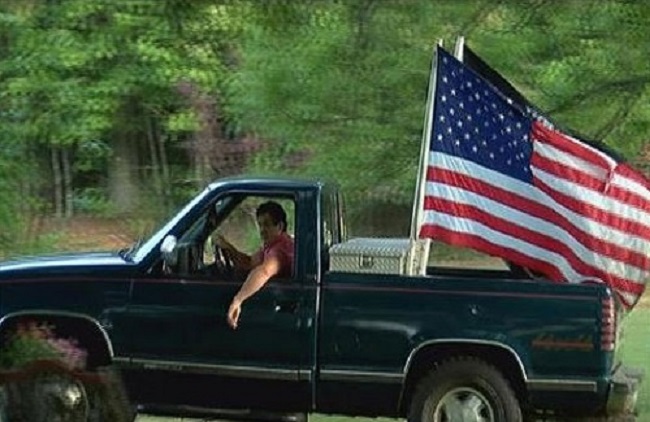 Every once in a while, we see stories about public schools banning the American flag from its students’ bicycles and automobiles.  Every time the community pushes back against this sort of unreasonable policy, the policy suddenly changes, and the schools’ representatives make a statement declaring the flag sacred, the school patriotic, and the intent of the flag ban benign or even beneficent.

A South Carolina high school recently had such an epiphany after banning one of its students from flying the American and POW/MIA flags on his truck:

Peyton Robinson, a senior at York Comprehensive High School in York, S.C., has been driving his truck around our end of York County with two large flags attached to the bed – an American flag and one that honors military servicemen and women who have been taken as POWs (prisoners of war) or are MIA (missing in action).

On Wednesday, May 13, he was pulled from class and sent to meet an administrator in the parking lot, where he discovered his flags had been removed and placed in the bed of his truck.  He was told by school officials, “Do not return to school with these flags.”

According to Peyton’s Instagram post, the school administrators told him that “people had complained,” but when the school issued its statement, they said the ban was due to “safety concerns.”  Apparently, the flag was a driving hazard that the public high school was uniquely qualified to address.

Whatever their initial purpose in and subsequent justification for telling Peyton that he had to remove his flags, the backlash from the community, online, and in the national media was rather more than they bargained for:

On Thursday, An impromptu parade of more than 70 vehicles filled with flag-waving friends, classmates, and local patriots made its way through town and then parked in front of the school for a demonstration, country-style.

The story topped the news all over this conservative-leaning South Carolina county, and was soon picked up by national media.

In 2010, a California middle school, also first citing complaints then safety concerns, told one of its students that he could no longer fly the American flag on his bicycle.  The response was immediate and amazing:

Public school administrators do understand that banning the American flag is unpopular and indefensible, so one wonders not only why they do it but how often they are successful with these bans.

What we need is a law that states that any negative action by any govt poohbah against anyone in relation to American flag use constitutes a waiver of all immunity defenses that could be otherwise available in any related lawsuit.

The immediate end of this stupidity would be stunning. The consequential silence of the idiots would be a wonderful by-product.

I don’t believe there is any immunity in the first place. The right to display the flag is a “clearly established statutory or constitutional rights of which a reasonable person would have known”, and thus there is no immunity for violating it.

But the idiots who come up with these stupid ideas get to keep their jobs. They get to continue poisoning the minds and souls of our children.
So, it will keep happening.
Who knows how many times they’ve gotten away with it!

They do not just keep their jobs. They become the Gypsy Supers and Gypsy Principals as I call them getting promotions on the basis of their willingness to be idealogues and lie to parents and students. Then because in public ed your lifelong pension is tied to your last 3 years of salary, these same individuals are being told they can retire at taxpayer expense in the 6 figure plus range BECAUSE they were willing to do this.

Living well at taxpayer expense for the rest of your life because you are good at lying to taxpayers.

And we wonder why we are crashing.

I expect such bans are actually rather common. We only hear about the ones where someone with guts pushes back.

They will very often wrap themselves in the flag (heh!) of “public safety”.

They did it with Pam Geller, they do it all the time. “Oh, sure, we have a right to express ourselves, BUT we shouldn’t do it when it involves something that might provoke someone or pose a safety risk.”

But how often do you hear from those same people when idiots close down a bridge or thoroughfare?

See, there has ALWAYS been a tension between liberty and “public safety”. Where we live on the continuum is the key.

Good for the kid and the community for rallying around his stand against petty, anti-American tyranny.

The community may not be able to get the administrator fired, but he should be given an appropriate shameful nickname (Triple A for Anti-American Asshole?) and be openly addressed by it in the community and in school by the students until he leaves in shame, assuming he’s capable of shame, which is doubtful.

OMG! No riots! I would consider this a civil rights violation requiring AG Lynch to come and investgate.ASAP!

I, for one, am glad for the idiocy and petty tyranny of school administrators everywhere.

This is how we continue to teach our kids to stand up to authority figures.

One generation of government bureaucrats who are universally wise and fair is all it would take to eliminate the stubborn individualist nature of the American psyche.

I’m not at all worried that that will ever happen.

I’m not sure where you are coming from…

I see most education administration as CYA in motive, saving their asses from litigation. They once upon a time thought of students.

Where did the “zero tolerance” foolishness come from?

Where did the group punishment nonsense come from?

Perhaps we need to look at the training/selection process.

I absolutely don’t mean that the administrators are deliberately teaching this lesson.

From their perspective, it’s an unintended consequence.

Part of growing up is learning that your parents are human.

Part of growing into a citizen of a free country is learning that authority figures are human. It’s precisely learning that the principal cares more about CYA and politics than about student welfare that teaches us not to expect mayors and governors and judges and DAs to be Solomon — or even just unbiased. It’s the realization that turns progressives into libertarians.

Who complained? No names? Then I say the administrator lied.

Do you want to reverse this trend? Run for the school board!

There has got to be some recent law school graduate that can take a little time off from his job at Starbucks and file a civil rights violation law suit against the school administrator involved.

It would be good practice and an easy target.

I’m an old-fashioned kind of girl. I say, let’s bring back tar and feathers.