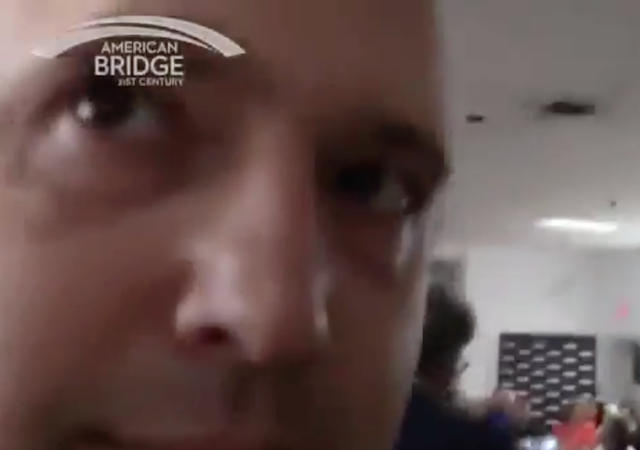 It’s only May, and things are already getting weird on the campaign trail.

Yesterday, “Justin,” a tracker from the progressive oppo research group American Bridge, showed up at a Rand Paul campaign event, worked his way inside, and started filming. One of Paul’s staffers noticed, and in a bizarre turn of events, decided that the best way to deal with the incursion was to…lick the camera lens?

Dave Weigel at Bloomberg has the back story:

The staffer is David Chesley, Paul’s New Hampshire political director. He joined the team officially when Paul’s campaign began, but before that, it had been up to him to march up to the tracker and inform the people checking in reporters that, no, this guy was not to be allowed in. On Monday, Chesley made that clear to the tracker, who headed outside with a gaggle of reporters attempting to grab a moment with Paul. When the senator showed up, delayed by a meeting, the gaggle stuck to him liked chewed gum, and the tracker was able to make it into the mid-sized room where TV cameras would be filming Paul. After that: The licking.

Here. Get it over with:

The left is far too happy with themselves—they even got a new slogan out of it:

Anyone who has worked a campaign knows about the hate-hate relationship you develop with your trackers. They’re like your own personal cameraman that you never asked for, don’t want, and who lives to capture your worst possible moments. They cajole, they harass, they push staff to the limit in the hopes that one day, they’ll be ejected a little too forcefully from X candidate’s event—that footage would be gold.

I can’t say I ever got so frustrated with a tracker that I considered rounding first base with his wide angle lens, though. You never know where that thing has been.

As Weigel points out, the lick seen ’round the internet was the biggest piece of news to come out of the event. As of this writing, Chesley is still employed (and I don’t think he shouldn’t be,) and the lick has been chalked up to a legitimate moment of weirdness that both sides are chuckling over—but it still shouldn’t have happened. As the weeks wear on, we’re going to see trackers and other oppo minions push a lot harder and dig a lot deeper, and I’d hate to see a lick escalate into something that’s actually newsworthy.

That being said, if this is our benchmark for “weird,” I can’t wait to see what the rest of this cycle has to offer.

My suggestion would have been to have enjoyed a Hershey or 5th Avenue bar, then licked.

I would suggest Pam or Baker’s Secret. No permanent damage to whine about.

Ohhhh, so many jokes can be made out of this, so little time.

The answer to your question about Rand is on the tip of my tongue . . .

“I can’t say I ever got so frustrated with a tracker that I considered rounding first base with his wide angle lens, though. You never know where that thing has been.”

Amy, that almost made me damage my monitor from laughing with a mouthful of cereal. Truth be told, we have a very good idea where it’s been which makes your caution very prudent.

A lesson I learned a long time ago when it comes to handling trackers:

1) Publicly invite them to come get a better seat. Generally, they come stand in the back or on the side. Make sure your team gets video of you inviting the enemy’s guy to sit right up front.
2) At an event where food is served, the candidate or someone high up needs to make a plate of food and deliver it to the tracker. Again, do this very publicly.
3) Get to know your tracker – find out their name and a little about them. If at all possible, work them into your speech. Talk about how you plan to serve the needs of people like him who, while misguided enough to support your opponent, are nevertheless great, dedicated, hardworking people who simply have a different idea of government. Then launch into why your side is better. Done right, it’s very attention getting.
4) If you have a very vocal tracker, ask them questions while speaking. In every situation where I’ve seen this used, it had some great results, because once they give in and respond, it becomes clear that they aren’t equipped for the debate. Don’t bully and be mean, but this last one can be spectacularly fun with the right audience.

When you send out your own trackers, make absolutely certain they understand not to engage the other side, that they eat before going and don’t act creepy or antagonistic. They are there to get the footage, nothing more.