New Yorker Cover Indicative Of How Media Sees The GOP

New Yorker Cover Indicative Of How Media Sees The GOP 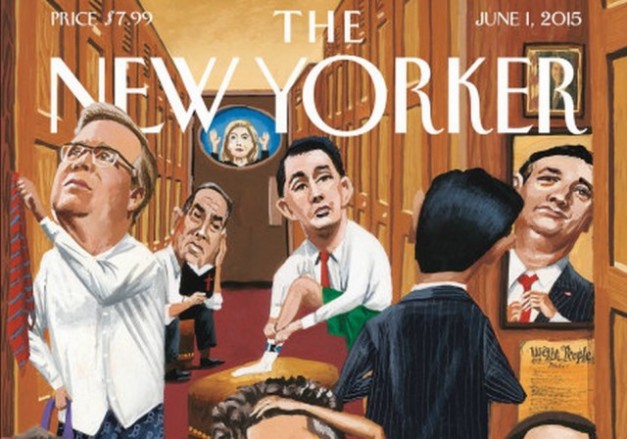 “Don’t you someday want to see a woman president of the United States of America?”

That was a line from a speech Hillary Clinton recently delivered for a gathering of the pro-abortion PAC, EMILY’s List. It was delivered with all of the warmth and charm we’ve come to expect from the former Secretary of State, which is to say none at all.

“First woman president” is basically what Hillary Clinton’s campaign will be, and the media will do all they can to help her across the finish line in order to accomplish that. Take the latest cover of the New Yorker for example: 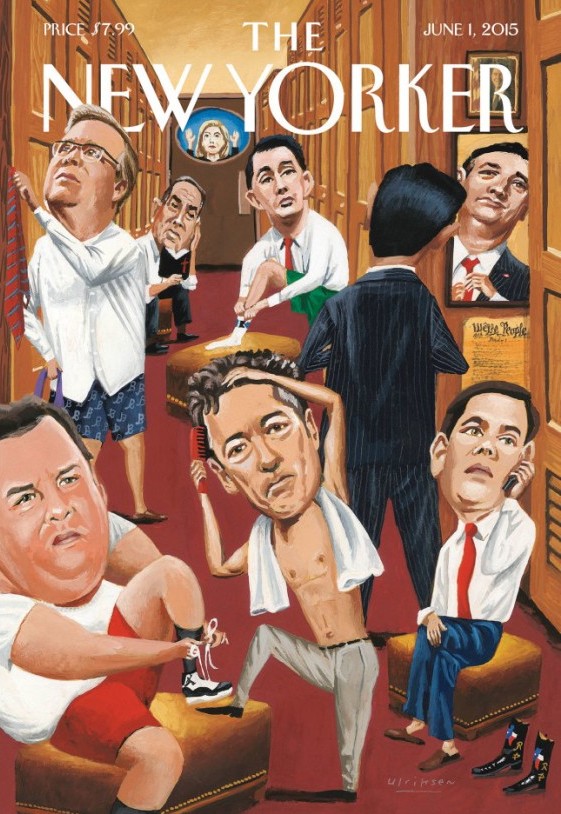 There’s “First Woman President” candidate Hillary standing on the outside looking in. The lone woman staring into a locker room loaded up with white guys, right?

The New Yorker had this to say about the group of potential GOP candidates in the photo:

How many Republicans are running for President? It’s a trick question. Some of those who are clearly running—Jeb Bush, for example—are still pretending that they aren’t, mostly because declaring would change the fund-raising rules. And if you counted everyone who, against all evidence, takes himself (or herself) seriously as a candidate, the locker room depicted in Mark Ulriksen’s “Suiting Up,” this week’s cover, would look as crowded as the departures hall at Penn Station, and almost as disconcerting. As it is, Ulriksen presents seven contenders with seven varieties of preening. Maybe it’s hard to tell a vision for America from a delusion of grandeur, at least until the debates and primaries get under way. Until then, Marco Rubio’s got his phone, Rand Paul his comb, and Huckabee his Bible. Ted Cruz’s eyes flit between his copy of the Constitution and his mirror, while Scott Walker seems on the lookout for unionized gym attendants. Bush is wearing his dynasty-logo boxers and Chris Christie his put-me-in-now pout. And yet, somehow, one of these seven men is almost certainly right about his chances for the nomination. The primary campaign may look like a pickup game about to descend into a brawl, but there’s a national candidate somewhere in the lineup.

Of course, this raises an obvious question: Why doesn’t the cover feature other GOP candidates, particularly those who have officially entered the race?

The makeup of that picture would change very quickly as it would feature Ben Carson and Carly Fiorina, both of whom are officially in. Unlike Jeb Bush, Chris Christie, and Scott Walker who have not yet declared their candidacy.

In addition, if the cover features yet unannounced candidates, where is Bobby Jindal?

The answer to those two questions is easy enough to be a $200 answer on Jeopardy: It would throw cold water all over the “White male GOP” narrative.

By including Carson, Fiorina, and Jindal, the editors at The New Yorker would have to admit by proxy the contenders for the 2016 GOP nomination is the most diverse field of potential presidential candidates in U. S. political history that features two Cuban-Americans, an African-American, a woman, and an Indian-American.

Meanwhile, on the Democratic side, in addition to Hillary Clinton (67 years old), potential and announced candidates include:

They’re lucky to have O’Malley in the mix or else the average age of the Democratic candidates would exceed the current retirement age by 2 years.

It likely won’t make much difference in the long run, but the media still needs to be called out on this kind of obvious bias.

If the cover was about letting Hillary into the boys’ locker room, why aren’t O’Malley and Sanders in the locker room too? How about Carly and Ben?

Why is it that the ‘pub Hispanic candidate, Rubio, has his face turned? Why is Cruz shown looking through a window,

Looks like the all left all day New Yorker is just cheesing up the candidates as privileged white men. No one else need apply to be a victim of their leftist drama.

Don’t forget, Cruz is also Hispanic, and I believe he’s not looking through a window, but looking in a mirror.

Some of the most powerful rank propaganda has always been art.

I bet all 5 readers of the New Yorker love the cover!

Well, assuming they can read – which isn’t a given. Ergo the icon pictures?

The Democrat scene would depict a reverse view, with a baby tortured, dismembered, and bloody, clawing at the privacy screen to escape its murderous fate. Nameless. Voiceless. Unarmed. Forgotten. A wicked solution to a “wicked problem”.

I wonder if Clinton is looking to the grass is greener on the other side. In principle, anyway.

It’s actually much worse than you think. The reason the media didn’t put Ben Carson, Carly Fiorina and Bobby Jindal in the picture isn’t because it would disrupt the narrative but because they actually believe that narrative.

You see, as far as the media geniuses are concerned, any Republican of some other than white (or male, or rich) color is, at best, a token who can’t be taken seriously anyway. They are so sure Republicans will never vote for such obviously non-WASMP candidates, that they simply dismiss them.

Dear America: How’d that ‘gotta vote for the first black president’ work for our country?? How’d it work for he Mideast?? Ukraine?? How’d His Infantile Majesty’s 6+years of broadcasting retreat, timidity and weakness work for our world?? Israel is horrified, as are Saudi Arabia, Egypt and many others. Putin is laughing. The Chinese are snickering. Iran is advancing and showing Obama their Islamist Arse.

So, Hillary Voters, you want that sorry Hag to be our FIRST Woman President?? Simply Obama’s catastrophic third term??

And if you counted everyone who, against all evidence, takes himself (or herself) seriously as a candidate, the locker room depicted in Mark Ulriksen’s “Suiting Up,” this week’s cover, would look as crowded as the departures hall at Penn Station, and almost as disconcerting.

Considering how the Dems appear to be looking desperately for someone to oust Shrillary from the top of their ballot (Run Lizzy, Run!), Carly Fiorina has about the same chance of winning her Party’s nomination as the former (failed) Secretary of State.

As it is, Ulriksen presents seven contenders with seven varieties of preening. Maybe it’s hard to tell a vision for America from a delusion of grandeur…

Preening and delusions of grandeur seem to be the daily routine for Mrs Clinton, her successor, the startlingly inept Secretary Lurch, and their liege, King Leroy Soleil himself.

Does Paul even comb his hair? Is that where the “humor” comes in?