“He drank the kool-aid.” 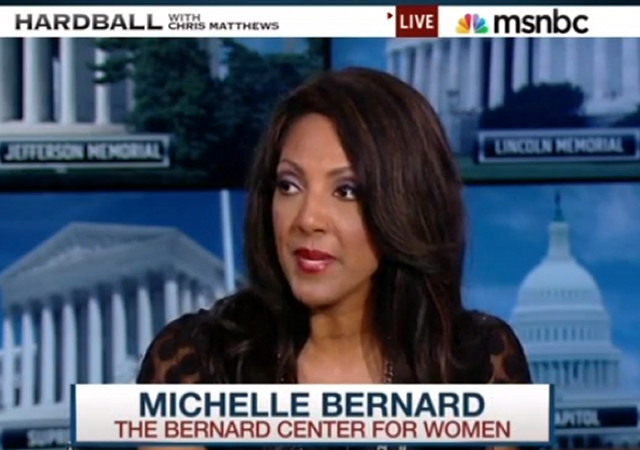 Remember when any criticism of a black man running for president was indisputable proof of racism? MSNBC doesn’t.

Progressives have forgotten everything that happened since the 2008 election and they think we have too. It’s already obvious that Dr. Ben Carson, a renowned pediatric neurosurgeon, is not going to get the respect the left gave to America’s most successful community organizer.

According to MSNBC pundit Michelle Bernard — best known at NewsBusters perhaps because of her insistence that there is a “war on black boys” in America — savaged newly-announced GOP presidential aspirant Dr. Ben Carson tonight by alleging his success is all owed to “affirmative action.” She also suggested that he’s a disgrace to his enslaved ancestors and to the black community in Baltimore, where he’s lived throughout his career as an acclaimed neurosurgeon…

MICHELLE BERNARD: It is absolutely horrifying. You take one look at him and you say to yourself, well, your ancestors didn’t come here on their free will, so how is the Affordable Care Act in any way comparable to slavery? Ben Carson and Carly Fiorina have the same problem. People are going to say, who is the real Ben Carson? The person who probably went to Yale and University of Michigan for medical school because of affirmative action and because of social problems and didn’t end up like many of the black men that we see in prison today in Baltimore, where he came from, because of these same social problems.

You don’t have to be a brain surgeon to know why Democrats will never be fair to Dr. Carson.

And while we’re on that subject, here’s former Obama adviser, David Axelrod:

I suspect Dr. Ben Carson is about to learn that running for President of the United States is not brain surgery.

If a community organizer can do it… @davidaxelrod: I suspect Dr. Carson is about to learn that running for President is not brain surgery.

I think this is meant to be a slight, but brain surgery seems a more noble act than running for president, no? https://t.co/nskZWXX4S0

First Dana Milbank, and now MSNBC choosing to focus on Dr. Carson. He was not my initial most favorite candidate, but these actions tell me that the Democratic Party fears him the most. I may need to reassess.

Why else would Bernard so openly and blatantly reveal her racism?

Good point. So true. And one of those traders that sold black people was the very black muslim ancestor of Obama.

Obama’s family were recent converts. His paternal grandfather, Hussein Onyango Obama, floated a little bit between Christiniaty and Islam, He first converted from
a tribal religion and became a Roman Catholic and he later
converted to Islam. (maybe because he wanted more than one wife) That’s when he took the name Hussein.

Obama’s father seems to have been both a Christian and a Muslim – and really nothing.

And being in Kenya, any kind of slave trading any one of his ancestors in Africa might have been involved in, would have sent people into slavery to Arabs, maybe as far as Zanzibar, or Ethiopia or Yemen or maybe even not-Arabs in Ethiopia.

The Portuguese picked up the idea from the Arabs, but not the same slaves.

Remember lots – if not the majority – of those slave trappers in Africa were Muslim.

“The person who probably went to Yale and University of Michigan for medical school because of affirmative action . . . ”

So of course Dr. Carson “probably” needed affirmative action to get into Ivy League schools, because no black man could ever achieve that on merit, according to this obviously raaaaacist chick.

If there is a “war on black boys” it’s being waged by idiot bigots like this woman, who believe, and teach black boys, that blacks can’t succeed without special government favors.

Here’s a tip for Ms. Bernard: not every successful black person is an affirmative action fraud (like Barry and Michelle Obama, to cite two prominent examples). Lots of intelligent and hard-working black people achieved their success the old-fashioned way — they earned it.

NO. BODY. Rises to be head of pediatric neurosurgery at a major teaching hospital by dint of affirmative action.

ONLY by affirmative excellence.

Maybe our side, when confronted with her type of ignorant diatribe, should respond by saying “there is a rumor that Carson only got into medical school by claiming his great grandma was Cherokee using as evidence that his aunt used to admire his high cheekbones.”

A pity she can only talk and not something that benefits society….. like brain surgery.

All the idiot lefty talking heads in the world cannot save 1 life.

I guess she hasn’t had time to read of Dr. Carson’s accomplishments. The new procedures in brain surgery that he introduced or the charity that he and his wife have totally funded for years. Not to mention his books. So all this is due to affirmative action? Wow! I wonder what she has done since she is obviously an AA baby.

Remember that projection is a strong progressive trait.

What they are doing, is what they accuse Conservatives of doing.

So when this interchangeable talking head gal accuses Dr. Carson of getting his position through Affirmative Action, then you can be assured that that’s how she got her job.

There also may have been some casting couch involved; who can say.

Can’t disagree with that!

Bernard apparently doesn’t grasp the difference between succeeding in science and medicine on the one hand, and “succeeding” in a government or media job.

Serious Question: Did Yale have affirmative action quotas when Ben Carson was accepted? My impression has always been that those started in the mid-70’s. Ben Carson (Yale ’73) would have been accepted in 1969.

I’m pretty sure Dr. Carson has said he benefited from affirmative a action to go to college but not to Med school. Even if true, so what? The opportunities in 1969 are very different from today. And his point about the matter today focuses on opportunity and NOT outcome. This progressive mentality that if you have ever benefited from a gov program you MUST support modern progressive big government programs lacks rational justification.

“Social problems” got Dr. Carson into school? Msssssssss. Bernard seems to have trouble with big words like “programs” and “Problems”.

That’s only because he’s demonic.

This from an Obama supporter, lacking self-awareness of the fact that Obama’s admission to Columbia, then Harvard Law as well as becoming editor of the Law Review were all entirely due to his race.

His political career from then on was equally entirely due to race.

Then, of course, came his appointment of Sonia Sotomayor to the SCOTUS, who has openly admitted that her entire career – from college admission on, was due to affirmative action.

the fact that Obama’s admission to Columbia, then Harvard Law as well as becoming editor of the Law Review were all entirely due to his race

Obama’s being black was a necessary, but not a sufficient condition for him becoming editor of the Law Review, and it really owed more to politics.

He was a compromise choice between the radicals and the conservatives (or moderates?) selected at the upteenth ballot.

…And while Obama owed his election to the Harvard Law School presidency to conservatives, he nonetheless thanked controversial black professors…

The conservatives assessed him correctly. he did not damage or politicize the Harvard Law Review.

More about the election:

Mr. Obama was elected after a meeting of the review’s 80 editors that convened Sunday and lasted until early this morning, a participant said.

Until the 1970’s the editors were picked on the basis of grades, and the president of the Law Review was the student with the highest academic rank…

…That system came under attack in the 1970’s and was replaced by a program in which about half the editors are chosen for their grades and the other half are chosen by fellow students after a special writing competition. The new system, disputed when it began, was meant to help insure that minority students became editors of The Law Review.

Harvard, like a number of other top law schools, no longer ranks its law students for any purpose including a guide to recruiters….

….Mr. Yu said Mr. Obama’s election ”was a choice on the merits, but others may read something into it.”

I’ve read that Obama’s year at the YLR is one of least-cited years in the Review’s history, and that the next president of the Review had some repair work to do.

Also, “on the merits” obviously does not include merit in legal scholarship.

Rousseauism strikes again: While touting “affirmative action” as the reason for Dr. Carson’s success, MSNBC’s pundit Michelle Bernard is actually restating the point that blacks ARE inferior and can only succeed if a Progressive-government-affirmative-action-enslaved-institutional program is involved. The human component of success, whether of black or white derivation, is nil to her.

We all breathe the same free air, but some, at hubristic heights, breathe thin polluted air, air contaminated by the black identity politics of fuming envy.

It’s kind of sad – I had to share this story on FB from the RealClearPolitics site because this site share comes up with a white woman’s face, which negates the entire thrust of the story.

I just checked it – and you are correct!

The image is of a white female – one of the authors/writers on this site, I believe.

I’ve had similar problems in the past – I just delete the image on FB, after copying the URL and posting to my status, rather than using the link button.

Sad – and you are right; this needs to be fixed.

This is progress. The left now thinks affirmative action empowers people not qualified. Except… he separated twins joined at the brain. As they used to say, politics ain’t brain surgery. Oh, I guess they’ll have to change that one too.

Sooooooooooooooooooo, Dr.Ben, remember that in the vapor of Lefty-MSNBC World none of the about to commence attacks on you will be RACIST,’Yo. None, after all, of the sliming of Clarence Thomas were RACIST,’Yo. Nor, were the mendacious non-stop piling on of Sarah Palin, ya know, SEXIST.

When the same charge was flung at Clarence Thomas, his rational response was that it’s a strong argument against “affirmative action,” which forever saddles talented, industrious black people with the suspicion that they did not — and could not — actually earn their success.