Should we take cover? 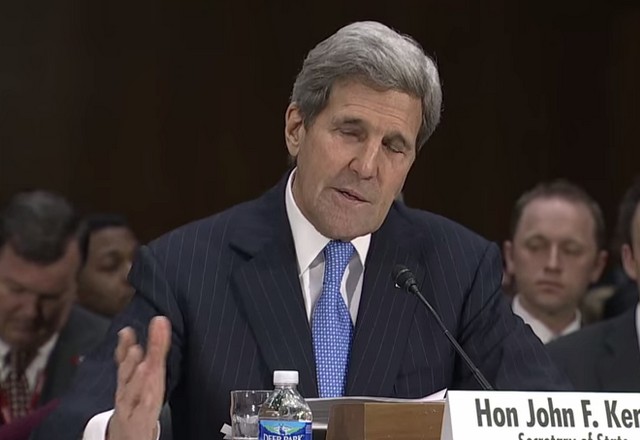 Brace yourselves for an international incident: John Kerry is going to Russia…and he wants to talk about Ukraine.

I don’t think I’m out of line for assuming that some sort of disaster will come of this, even if he does manage to make progress with the increasingly belligerent and wholly unaccountable Russian leadership.

This will be Kerry’s first visit to Russia since 2013, and only his second as Secretary of State. The 2013 visit fell just before Russian relations with Ukraine bottomed out amid the conflict that eventually led to the 2014 annexation of Crimea. Based on statements released by both Moscow and Washington, this trip is less of a diplomatic jaunt, and more of a salvage operation.

“This trip is part of our ongoing effort to maintain direct lines of communication with senior Russian officials and to ensure U.S. views are clearly conveyed,” State Department spokeswoman Marie Harf said in a statement.

In addition to Ukraine and Syria, she said the talks would also focus on the ongoing nuclear negotiations between Iran and the group of nations known as the P5+1 — Russia, the United States, Germany, Britain, France and China.
…
The meeting will occur amid tensions that Moscow squarely laid on Washington’s doorstep in a statement released Monday by the Foreign Ministry. While saying it hoped Kerry’s visit will “normalize bilateral relations on which global stability largely depends,” it also blamed the United States for provoking the Ukrainian crisis by isolating Russia and prompting its allies to follow suit.

That’s the great thing about Russians—they don’t beat around the bush when it comes to people they don’t like.

This trip comes on the heels of Kerry’s unprecedented stop in Somalia last week, where he discussed the possibility of greater US intervention in the Horn of Africa. Landing in Mogadishu was a historic move; his time in Sochi has the potential to be just as important if Kerry can manage to control the narrative coming out of the meetings.

Foreign policy experts are saying that US-Russia relations have plummeted past Cold War-era levels of hostility; Moscow still insists that Washington’s position on Russia’s alleged arming of pro-Russian separatists in the Crimea contributed to the violent conflict in the region. Washington, on the other hand, has publicly floated the idea of arming Ukrainian government forces, leading to disagreements with leaders in the EU. Still, the western powers remain united against Moscow’s aggression.

In a sign of Western displeasure over Ukraine, the leaders of the United States, Germany, and France skipped a military parade in Moscow on Saturday marking the 70th anniversary of victory over Nazi Germany.

“Groundlessly making Russia responsible for the Ukraine crisis which was largely triggered by the United States itself, in 2014…Barack Obama’s administration chose a path to cut back bilateral ties, proclaimed policy toward ‘isolating’ our country at the international scene and demanded support to its confrontational steps from countries who traditionally follow Washington’s track,” the Russian foreign ministry added.

This, coupled with Russia’s willingness to play nice with Iran, should make for an interesting little peace summit.

“Moscow still insists that Washington’s position on Russia’s alleged arming of pro-Russian separatists in the Crimea”
I think you meant Donbass.
I like how his primary focus, as it’s being reported, is not on Iran.

I really feel sorry for John Kerry.
It must be hard to be the representative of the biggest cretin in the world.

I suspect O largely checked out on foreign policy. Cuba is probably his Big Idea, but other than that… maybe peace with Iran. His instincts tell him nothing about some blond people in Eastern Europe, and he has no interest in reading up on the subject. Is the State Department bureaucracy driving our foreign policy?

Not so hard at all – if you’re the second biggest, which Kerry could well be.

Maybe they will hold him for ransom.

It’ll be funny if Kerry tries to ‘control the narrative’. Remember how that went with the red line in Syria. He mumbled something to the press about disarming Assad and the Russians made him eat it.
Never mind that while the Obama admin may love a good narrative not matter how departed from reality it might be, the Russians seem to favor results.
This is a recipe for Kerry losing his shirt. Again.

Good Lord, the 1980’s HAVE called and they DO want their foreign policy back. Where is George Schultz when you need him?

I wonder if all the prog drones who snickered and thought Barry Soetero was kewl when he spewed that nonsense during the debate are embarrassed at how stupid they are yet?

“…are embarrassed at how stupid they are yet?”

The word now is Putin may not even put in an appearance, a direct and deliberate snub.

Who can blame him, though? Will there EVER be a better time to insult the US and act against our interests than when we have a spineless worm/leftist in the White House?

Gonna be a looooooooong 619 more days.

I will go to my death without ever understanding how a self-confessed war criminal like Hanoi John Kerry could have been confirmed as Secretary of State. After his performance in front of Congress in 1971 he should have been barred from any government position higher than dog catcher.

He better take James Taylor with him.

Where Kerry goes, so goes a big giveaway. Obama’s idea of diplomacy and foreign policy is to give the enemy what they want to make them happy.