“The loudest voices in the room” 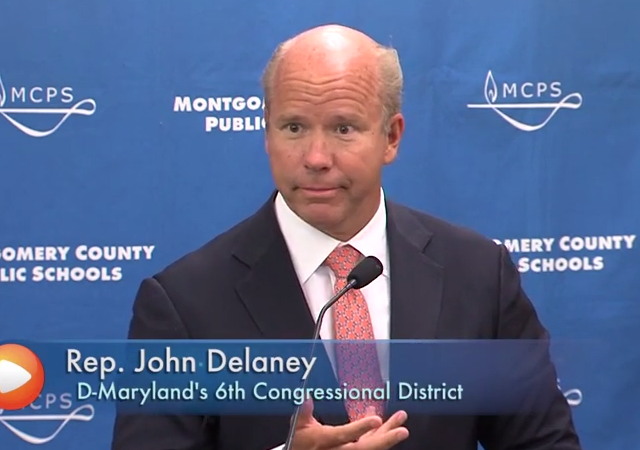 Congressman John Delaney of Maryland has noticed a hard shift to the left in the Democratic Party, making him unique among his colleagues.

Some Democrats are currently supporting the presidential run of a senator who openly describes himself as a socialist. You would think that’s enough to support Delaney’s conclusion, but he’s more concerned about the blockage of Obama’s trade deal.

Kevin Cirilli of The Hill:

Rep. John Delaney (Md.), a centrist House Democrat, on Friday warned that voices on the left have “hijacked” his party’s message.

“With Washington already broken, the last thing we need is a left-wing version of the tea party,” Delaney wrote in a Washington Post op-ed published online Thursday evening. “But I am worried about where some of the loudest voices in the room could take the Democratic Party.”

He said Democrats’ “party microphone has been hijacked by people more interested in scoring points than in solving problems.”

Delaney didn’t specifically mention any prominent liberals by name, but he delved into specific policy debates that have divided Democrats in recent weeks, including trade policy.

Liberal Democrats including Sen. Elizabeth Warren (D-Mass.) have bucked the White House in opposing legislation that would grant President Obama fast-track trade authority, arguing that it would favor corporations and put U.S. workers in competition with low-wage workers in other countries.

Not true, argued Delaney, who is among a small group of House Democrats who have vowed to vote for the fast-track bill.

“A fair trade deal is a crucial step in bolstering the U.S. manufacturing renaissance, boosting U.S. exports and growing our economy,” Delaney wrote. “Unfortunately, Democratic recalcitrance is increasing the chance that the deal could be done instead by a Republican president.”

Here’s an excerpt from the Washington Post column referenced above:

The last thing America needs? A left-wing version of the Tea Party.

Washington is paralyzed by extreme political rhetoric that creates powerful sound bites but poor policy. The big legislative updates that we need to compete in the 21st century and to raise living standards have been blocked by a reluctance to seek common ground…

Additionally, we need a philosophical shift in the Democratic Party, a new willingness to support programs that create pathways for nongovernmental and philanthropic innovation and investment to help solve the problems of society. We should embrace approaches, such as social impact bonds, that combine private-sector capital and expertise with public-interest goals to produce better government services. Such changes will require Democrats to leave our ideological comfort zone and move away from the idea that government, and government alone, is the answer to our problems.

In terms of a left-wing version of the tea party, we’ve already been down that road.

Does anyone remember the coffee party?

It’s time for the public to take the country back from the clutches of both parties. Neither party is solving the right problems. There are 8 enumerated powers and the fed gov is more concerned with what it wants to do rather than what is allowed to do,

I have been waiting for the first tentative public admission of a US Democrat lawmaker that he and his party have progressed over a cliff of biblical heights …however equivocating and posturing it maybe.

SUDDENLY that left wing left to our left and they left with what was left of the left I am.

I think there is a Prosecutor in Baltimore that will be looking at this guys job in the near future. Unless, of course, Hillary picks her as her VP running mate.

End your pro-choice (e.g. selective child, selective exclusion or “equal”, “no labels”) policies that debase human life and corrupt society. End your policies that denigrate individual dignity in order to create leverage. Stop progressive measures that serve to obfuscate causes and perpetuate their effects. Do that and there may be room to negotiate a compromise.

Anchovy, I think that Mosby’s more immediate goal is mayor of Baltimore. It’s important to remember too that Dan Bongino gave Delaney a bit of a scare in ’14.

Mosby is not anywhere close to MD 6th district. Delaney only won because of the horrific gerrymandering by the MD senate and house. He represents enough people in Montgomery county to boost him over the top. he represents from Potomac (the very rich) all the way to Western MD and Garrett County.
He pretends to be a moderate and votes with Obama 100% of the time. “A left wing version of the Tea Party” is outright slander of about 60% of Western MD voters he is supposed to represent.
He is a multi-millionaire who pretends.
The man most of us wanted was Dan Bongino, yes that Dan Bongino who is a Fox News contributor. He is hard working, decent, honest. The type of person people need to protect them from Washington.
Not an Obama-clone like Delaney.