The administration has another chance to speak up for freedom. 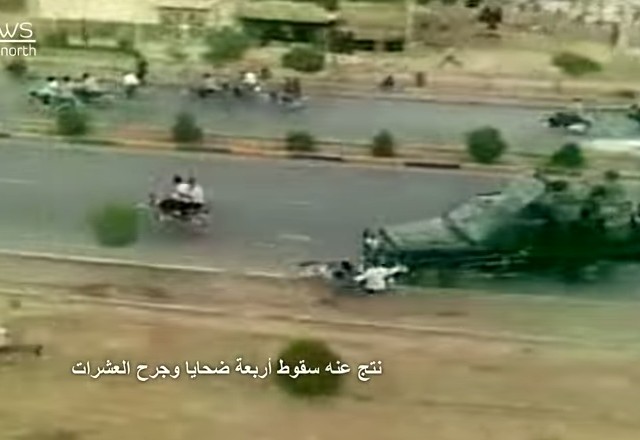 One of the things about Iran that isn’t generally understood is that its population is at least 40% ethnic minorities. There are Kurds, Ahwazi Arabs, Azeris and Baluchis for example. And of course there are religious minorities, Jews, Sunnis, Christians and Bahai, who also are persecuted.

So what happens when one of these groups revolts? It’s happening now in northwestern Iran, where the Kurds predominate. Last week a young woman who works at a hotel was introduced to a man who worked for the regime. He attempted to rape her and she fled. In the course of fleeing she fell or jumped from a high balcony and died.

Word got around the Kurdish majority of Mahabad and protesters marched on the hotel demanding #JusticeForFarinaz. Protests have continued at least through Sunday and spread to other Kurdish cities.

The protests have now spread to other cities in the country with large Kurdish populations, Hussein Yazdanpanah, the secretary-general of the Kurdistan Freedom Party (KFP), a Kurdish–Iranian opposition group based in Iraqi Kurdistan, told Asharq Al-Awsat on Sunday.

“The protests have now spread from Mahabad to the cities of Dukan, Shanu, Marivan, Sardasht, and Sahneh,” all in Iran’s northwestern region, Yazdanpanah said.

Iranian security services were sent from the nearby cities of Hamadan, Esfahan, and Kirman to contain the protests, clashing with the demonstrators and arresting more than 200, most whom came from Mahabad, he added.

Yazdanpanah claims that his organization, KFP, has urged Kurds to take to the streets peacefully. Less delicately he claims that his group has fighters ready to take on government security forces. He said that so far three protesters have been killed and dozens more injured. There are reports that as part of its crackdown on the Kurds, the Iranian regime has cut telephone and internet connections to the region.

These protests aren’t getting the attention that the Green movement got in 2009. And President Obama stayed quiet then so as not to upset the Iranian authorities. With Obama believing that a nuclear deal with Iran is within reach and even less publicity, there is no way he will make Kurdish rights and Kurdish persecution an issue.

Still it is disturbing the degree to which the administration curries favor with tyrants of Tehran and remains indifferent to the yearning for freedom of those oppressed by the regime.

Just more evidence that this administration really has little interest in ideas such as freedom and democracy. They run counter to obama’s ideology.

I wonder if he knows anything about Persian history?

That made me giggle.

Does she? Why would she?

Definitely a confusing topic. As the saying goes, “one man’s Mede is another man’s…”

She was born in Iran.

Do you expect Ted Cruz to know much about Alberta’s history?

Damn straight! He should have to introduce Bernie Sanders in Aberton…Abertese…ayh?

Obama knows nothing about anything except when a teleprompter is available…

Is there any reason for the U.S. not to support the formation of an independent Kurdistan, carved out of parts of Turkey, Iraq, and Iran?

I thought it was a bad idea during the Gulf Wars, but Iraq has already fallen apart in the mismanaged aftermath. It’s hard to see how the Kurds could do a worse job of governing themselves.

Turkey is supposedly our NATO ally.

Yes, and Islam is a religion of peace.

The Kurds are a strong influence for good on the Baghdad government.

clintack, Scholar Jonathan Spyer wrote about that in Sept. 2013. http://www.thetower.org/article/freedom-for-the-kurds-now/ Worth a read.

Forget Obama doing anything. Maybe the CIA can get involved here and take advantage of rifts within Persia. I don’t believe more than half the population is actually Persian. Tehran needs a bad distraction.

The CIA works for 0bama, and can’t do this without his orders. And popular “wisdom” on the left (and on too much of the right) is that all our problems in Iran are because of the last time the CIA got involved, helping the Shah’s propaganda campaign against the pro-communist coup in 1953.

The CIA works for 0bama…

Thanks snopercod. I didn’t even want to start explaining. There are things ongoing “on the books” and those that are farmed out “off the books”. 1953 has nothing to do with anything.

You forget that the Church committee gelded the CIA nearly 40 years ago. What has it done since that was worth anything?

Yes, the CIA works for 0bama. Who else do you think it works for? At least when there’s a Democrat in the White House?

The CIA managed to overthrow the Taliban government of Afghanistan rather quickly.

Wasn’t that the armed forces that did that? What role did the CIA play? (And whatever they did there, they did at the president’s orders, even though he was a Republican whom they later tried to bring down.)

Milhouse…think back to the first days of the campaign. Remember the Northern Alliance? First things first.

“Wasn’t that the armed forces that did that?”

I would bet dollars to donuts that there are Green Beret A teams all over the area. But we would never know for sure.

I rather expect that if there is any real uprising against the Persian majority, that Obama will send aid to the Iranians to suppress them.

Obama, the new American President…screw our allies and hug our enemies.

This is not a revolt against the Baghdad government. It’s a complaint about one particular thing, and basically, the government in Baghdad will have to stop or avoid protecting the would-be (or actual) rapist, or at least remove him.

Sammy, I know you’re not very bright, and I know it is confusing keeping the Soros funded memes straight, but do try to keep up.

Read the story again and try to figure out which government is involved here, would you.

If we could get arms to the Kurds they would cause havoc in Turkey,Iraq, And Iran. No one could predict the outcome, but now that obama has screwed things up so thoroughly i am not sure it matters much.

Truth be told, we better not de-stabilize Iran until we decide to help Assad stay in power. If Iran falls or falters severely, Assad could fall. If he falls we will never get rid of ISIS without many ground troops, plus every Christian in Lebanon would likely be killed or exiled. Jordan would be very endangered from ISIS and I don’t even want to try to guess what the Israelis might do.

We need to stalemate the whole Middle East until we can figure out how to support our allies while standing against our enemies.