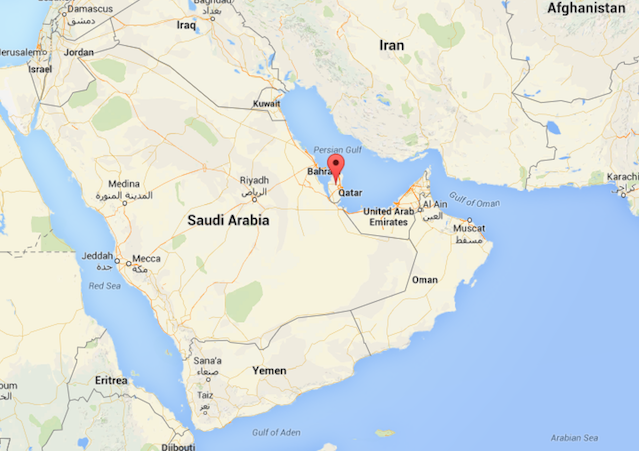 Qatar is busy prepping to host the 2022 FIFA World Cup, and that means importing thousands of migrant laborers from all over the world to help complete massive (and costly) construction projects; the tiny country is sinking billions into the completion of new roads, hotels, and stadiums, and and has come under criticism from the international community for what are alleged to be unsafe (read: deadly) and unhealthy (read: inhumane) labor practices.

As part of a campaign to revamp the event’s image, Qatari authorities organized a media event aimed at allowing full access to the areas where migrant workers live and work. Claims that workers’ situations had improved were not enough, and journalists from many different countries flew in for what they believed to be an open access event.

BBC News’ Mark Lobel and his team were among the journalists to attend the event—and now they’re saying that they’re lucky they were able to come home.

Lobel and his team were arrested in Doha, Qatar, while they were on their way to film a specific migrant camp. They were surrounded by official vehicles, had their equipment confiscated, were separated and interrogated about where they were going and who they had spoken to—and yet were never accused of a crime.

An hour into my grilling, one of the interrogators brought out a paper folder of photographs which proved they had been trailing me in cars and on foot for two days since the moment I’d arrived.

I was shown pictures of myself and the team standing in the street, at a coffee shop, on board a bus and even lying next to a swimming pool with friends. It was a shock. I had never suspected I was being tailed.

It was meant to be the first day of our PR tour but instead we were later handcuffed and taken to be questioned for a second time, at the department of public prosecutions.

Thirteen hours of waiting around and questioning later, one of the interrogators snapped. “This is not Disneyland,” he barked. “You can’t stick your camera anywhere.”

It was as if he felt we were treating his country like something to be gawped at, suggesting we thought of trips to see controversial housing and working conditions as a form of entertainment.

Lobel and his team spent three days in prison before they were released—and allowed to rejoin the press outings.

The BBC and FIFA are both demanding explanations and transparency…

“We are pleased that the BBC team has been released but we deplore the fact that they were detained in the first place. Their presence in Qatar was no secret and they were engaged in a perfectly proper piece of journalism,” said a BBC spokesperson.

Fifa, which has come under fire for failing to use the leverage of the World Cup to press for changes to labour laws, said: “Any instance relating to an apparent restriction of press freedom is of concern to Fifa and will be looked into with the seriousness it deserves.”

…but Qatari officials are hedging:

The Qatari government’s head of communications, Saif al-Thani, said the BBC crew were arrested after departing from an official tour. He said: “We gave the reporters free rein to interview whomever they chose and to roam unaccompanied in the labour villages.

“Perhaps anticipating that the government would not provide this sort of access, the BBC crew decided to do their own site visits and interviews in the days leading up to the planned tour. In doing so, they trespassed on private property, which is against the law in Qatar just as it is in most countries. Security forces were called and the BBC crew was detained.”

Amazingly, the day after the crew was arrested, other media outlets were allowed to explore the camp that Lobel and his team were documenting.

The most disgusting thing about this whole ordeal is that it’s not unprecedented, and it’s not limited to high-profile sites for worldwide sporting events. Travelers vacation in repressive hellmouths like China, Vietnam, and Iran knowing full well what happens there, and what can happen to people who step out of line. FIFA came under criticism for granting Qatar rights to the 2022 Cup, and that criticism was justified (and not just under the context of a deeper international movement on social justice issues like racism, homophobia, and sexism.)

This isn’t unprecedented, but we are seeing new levels of depravity—once again, there’s a death toll connected to the construction of a sporting venue.

Props to the journalists who continue to uncover what’s really happening in Qatar, under the thumb of a government that clearly has much to hide.

I spent 5 months in Qatar working for Uncle Sam. For every 1 actual Qatari, there are 10 foreign workers; predominantly Filipinos and Nepalese. The Qataris never lift a finger, they drive around in Lambos and Bentleys and shop at malls with Venetian rivers running through them. The foreign workers who came on our base everyday lived in terrible conditions, the context of how/why they came there I am not sure. I got an egg omelet at the chow hall every single day I was there, and the same guy made it for me every single day. The United States officially opposes human trafficking, but I guess if you sub-contract it out, that’s not a problem.

The Qatari government has donated millions to the Clinton Foundation. Andrew Stiles at the Washington Free Beacon wrote an amusing piece tying the jailing of the journalist by the Qataris to Hillary. And not just Hillary. He figured out a way to link the Qatari government, Hillary, Lanny Davis, and some guy associated with Chelsea Clinton all together in one blog post.

It’s impressive. Better than a hit piece published by Stink Progress about a Republican.