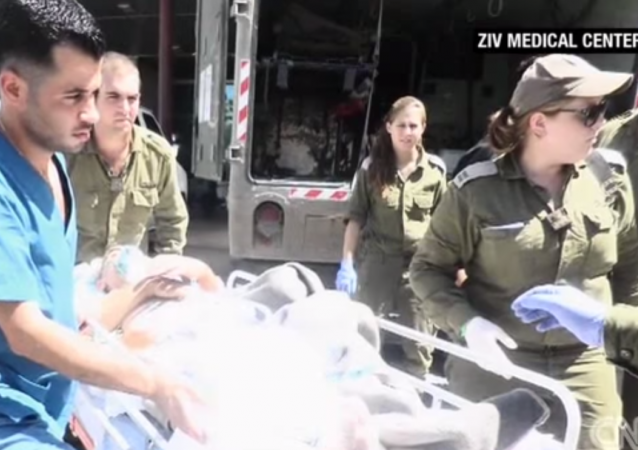 A couple of remarkable news reports have been broadcast in recent days about the care given Syrians wounded in the civil war across the border. One – the more dramatic one – was at the Israeli news site Ynet (affiliated with the daily Yedioth Ahronot); the other at CNN.

The Ynet article written and narrated by one of the paper’s top journalists, Ron Ben-Yishai told of an injured man -likely a jihadist – who was severely injured by a bullet to the stomach and shrapnel wounds. Israel has “trusted intermediaries,” on the other side  of the border who communicate when there is an injured person who needs treatment in Israel.

Most of the injured are woman, children and the elderly. However there are also younger men, such as the subject of the article. In this case the Israeli were told that without a hospital the man would die.

Despite having contacts in Syria, the Israelis know who’s on the other side of the border on the Golan Heights, so they have to take care:

At around 8 pm on the day the wounded Syrian was transferred, parties on the Syrian side announced they were approaching the fence. The Israeli ambulance and paramedics readied themselves, while Givati troops received a briefing and then headed out to the fence area. Their role is to make sure that those who sent the wounded citizens to the area had not laden them with explosives, as well as to ensure that the wounded person was not bait in a scheme designed to lure IDF troops into an ambush.

Considering the information Israel has on its new neighbors across the border on the Golan Heights – these extra precautions are necessary. Half an hour later, the commander of the forces stationed near the border gave approval to send out the armored vehicle carrying the paramedics to collect the wounded citizen, who was already waiting on the Israeli side.

The accompanying video (embedded below, with English subtitles) fills in some details. One of the IDF doctors, Lt. Col. Dr. Itzik Malka said, “In the past, people were very scared but because they see that more and more people are returning home and praising Israel and the medical treatment given here, they realize that the ‘little devil’ is doing things they really couldn’t imagine.” Ben-Yishai, who is anything but sentimental, was so impressed that he added his own observations, expressing his “marvel” at the “level-headedness and professionalism” of the doctor treating the wounded Syrian. According to Ben-Yishai the severely wounded man is now recovering.

The CNN report focuses on a boy, Jamal, whose leg was shattered by a rocket. He lost so much blood that his mother said he was in a coma for twenty days. But now he’s walking again, with a brace.

There is so much talk about doing something about Syria. The UN can have meeting after meeting and nothing gets solved because Russia has veto power. The Obama administration is intent on giving Iran more money, which would allow it continue propping up the tottering regime of Bashar al-Assad.

While everyone else is doing nothing or making matters worse in Syria, Israel, is heroically making a limited positive difference.

Ron Ben-Yishai told of an injured man -likely a jihadist – who was severely injured by a bullet to the stomach and shrapnel wounds.
———————
But it isn’t all just good PR. It’s also an intel gold mine.

They’ve been doing it a long time, for a whole lot less reward:

Imagine the situation reversed? Could a Jew work in a palestinian hospital?

The more important question is, how far from the “palestinian” hospital in which he worked would the Jew be slaughtered?