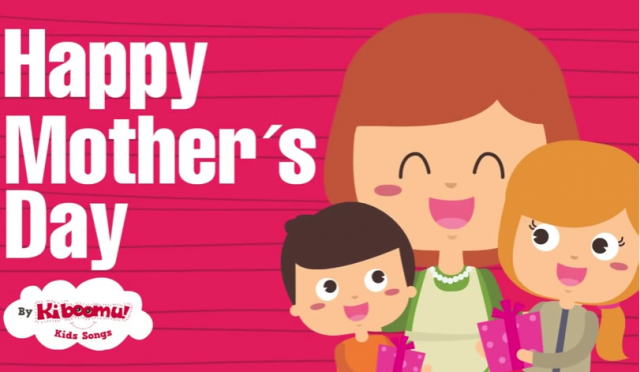 As I was preparing for my Mother’s Day vacation getaway, this tweet came across my screen: 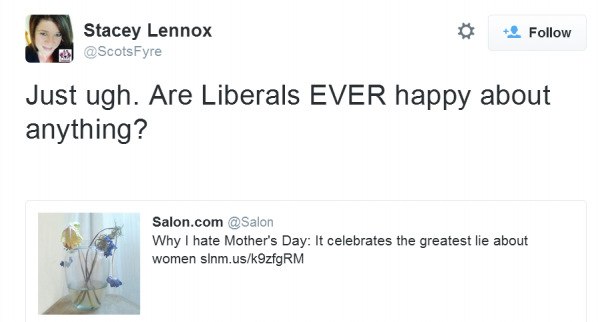 A worthy question, as I thought progressives would be positively joyful at this point in the “Hope and Change” presidency. However, they seem to be clinging to their bitterness.

Following the social media trail, it turns out that in a piece on Salon.com, author Anne Lamott transforms a happy holiday into a scourge:

I did not raise my son, Sam, to celebrate Mother’s Day. I didn’t want him to feel some obligation to buy me pricey lunches or flowers, some annual display of gratitude that you have to grit your teeth and endure. Perhaps Mother’s Day will come to mean something to me as I grow even dottier in my dotage, and I will find myself bitter and distressed when Sam dutifully ignores the holiday. Then he will feel ambushed by my expectations, and he will retaliate by putting me away even sooner than he was planning to — which, come to think of it, would be even more reason to hate Mother’s Day.

But Mother’s Day celebrates a huge lie about the value of women: that mothers are superior beings, that they have done more with their lives and chosen a more difficult path.

In her rush to create another victim group (non-parents), it appears that Lamott’s views could be considered anti-woman and racist.

The origins of that day are seeped in both the women’s suffrage and abolitionist movements:

Another precursor to Mother’s Day came from the abolitionist and suffragette Julia Ward Howe. In 1870 Howe wrote the “Mother’s Day Proclamation,” a call to action that asked mothers to unite in promoting world peace. In 1873 Howe campaigned for a “Mother’s Peace Day” to be celebrated every June 2.

And what should be even more disturbing to progressives about Lamott’s attack: Going back even farther in history, Mother’s Day may have its origins in goddess worship!

However, the most significant flaw in Lamott’s screed comes with her assertion that Mother’s Day “perpetuates the dangerous idea that all parents are somehow superior to non-parents.”

It does no such thing.

Lamott may think so: “Meanwhile, we know the worst, skeeviest, most evil people in the world are CEOs and politicians who are proud parents.”

I must admit, there was an astonishing amount of hostility and negativity in this one short blog post! I shudder to think what her books are like.

Most rational people view the day as a way of making special memories with their mother….not as a way to demean or victimize non-parents.

Ultimately, that is why we should read Lamott’s piece with some pity. Her Mother’s Day will be just another day…with no burnt toast in bed, hand-made cards, or fun walks on the beach.

Life is made up of such special moments. I hope Legal Insurrection readers have many great ones this Mother’s Day.

The beauty of free speech is that it, once again, helps us to spot the idiot.

I suspect her son will put her away as soon as he can find a judge to sign the papers and give him power of attorney. If he doesn’t simply ignore her.

Ah, another writer of moderate talent, attempting to seize the “fresh” perspective.

“But Mother’s Day celebrates a huge lie about the value of women: that mothers are superior beings…”

No. What is says is that mothers are unique beings. And many of them ARE far, far superior to the selfish women who put other, extraneous matters over all other interests in life.

Some mothers are just miserable scolds, like Lamott. But they started out as miserable people, and at least did give anyother human being life.

Some, it must be observed, are never “mothers”, but only dams…a female progenitor. They never earn the title of “mother”, just as there are many sires in our society who never approach being a father. And that is a terrible curse on our society.

Those terms…mother and father…are BIG terms, and if you meet someone who fills them pretty well, or you were lucky to have one as your own, you have met a superior being.

Mothers are superior beings — to their children.

Just like an anniversary is a special day — to the couple in question.

Are Liberals EVER happy about anything?

They might be happy for a short time, but sooner or later, another liberal will come along and straighten them out.

They are happy when they bring others down….that’s about it.

Think about it, whenever one of their fabricated victories for justice comes about do they really stop and enjoy the progress? They bring it up with a cursory statement and point out what’s still wrong and why we all have to feel bad about it.

Great post! Leftists have long ago abandoned actual feminism, what they disparagingly call the “first” wave.

This first wave of feminists wanted the vote for women, the ability to own property, but they also wanted to expand the woman’s role beyond the home for those women who felt they wanted to engage in employment beyond the “typical” women’s professions (school teacher, nurse, etc). They never intended to supplant motherhood, and they’d be horrified by these faux feminists today, as you so astutely note.

Just wait till you see what she has in store for Father’s Day.

To RadFems, fathers are necessarily rapey. But so is a prolonged glance…

Being a parent is absolutely harder than being a non-parent. I am a father and my closest sister (we are only 11 months apart) is not a mother. Having remarkably similar backgrounds, one could definitely see similarities in our lives – and most especially in our propensity to think of others and work hard for the good of others – up until I became a parent myself. After that, the differences became very clear. I can barely remember what it was like to have a whole Saturday to myself to do with as I pleased, much less a whole weekend.