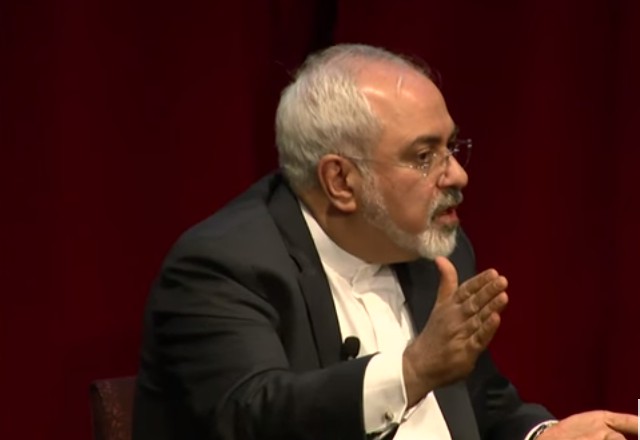 Last week Iran’s foreign minister and chief nuclear negotiator Mohammad Javad Zarif appeared in “a conversation” with columnist David Ignatius of The Washington Post at NYU sponsored by the New America Foundation. There were those in the media who described Zarif as “suave” and “diplomatic,” but not everyone was impressed with Zarif’s performance.

Matthew Continetti went after the supposed moderate in The Appalling Mr. Zarif.

What made Zarif’s appearance all the more nauseating was his pretense of moral standing. He has none. His lecture to the United States took place as his regime held a container ship it had seized in international waters, and as evidence emerged of Iranian violations of U.N. sanctions. It is the Iranian Revolutionary Guard Corps and its proxies such as Hezbollah and the Houthis and other Shiite militias that are fomenting and exploiting sectarian conflict in Lebanon, Syria, Yemen, and Iraq. Iran’s human rights record is abysmal. Since Zarif returned to government in the administration of Hassan Rouhani, there has been a “surge” in executions in Iran. “The authorities restricted freedoms of expression, association, and assembly, arresting, detaining, and prosecuting in unfair trials minority and women’s rights activists, journalists, human rights defenders, and others who voiced dissent” say the right-wing extremists at Amnesty International, whose most recent report catalogues the torture and cruel and unusual punishments of the Iranian regime. …

At NYU Zarif said America will have to lift sanctions on Iran “whether Senator Cotton likes it or not.” The “polite” and “respectful” audience broke into laughter—at Cotton. “I couldn’t resist,” Zarif said. No troll could.

“I am tempted to say you will pay for that,” Ignatius said. “But you already know that.” Actually, Zarif doesn’t know that he will “pay for that” because he and his Islamic fundamentalist superiors haven’t paid for a goddam thing for years. On the contrary: We’re paying them. They crushed a student movement and nothing happened. They’ve killed our soldiers and assisted in crimes against humanity in Syria and no one’s lifted a finger. They lie about their nuclear program and President Obama doesn’t retaliate. They scream at Kerry and he takes it. They say lift the sanctions and we say sure. We might even give them a signing bonus.

Everything in Continetti’s article is documented but few have bothered to put the case against Zarif together. (Well some others have looked into his record and ignored his superficial rhetorical charms.)

Though it’s probably not the worst thing Zarif said, there’s one aspect to his conversation that is worth focusing on. Ignatius asked Zarif about the Maersk Tigris that Iran last week seized as it sailed through an international shipping lane. Here is Zarif’s response:

As you know, I wrote an op-ed piece in the New York Times a couple weeks ago in which I repeated a long-time policy of Iran on the freedom of navigation in the Persian Gulf. For us, the Persian Gulf is a lifeline, and nothing is more important for us than freedom of navigation in those waters. And we are committed to respecting the freedom of navigation. This ship has had some rather peculiar activity as I hear from the lawyer of the company that filed a suit against this company, I think about some 15 or 16 years ago, for evading to pay or to deliver the cargo. That’s quite some time ago. And it has gone through court proceedings in Tehran, based on what I hear from the lawyer, public statements by the lawyer for the past 14 years. And it is the final decision by the court that the ship’s owners are supposed to pay the damages that are incurred on the private company that had the lawsuit against this company in an Iranian court with jurisdiction over this matter. And simply, our naval forces implemented the authority of the court. That’s the legal case, and it’s being followed as a legal case. It’s not a security issue or a political issue. For us, freedom of navigation in the Persian Gulf is a must. And we are prepared not only to respect it ourselves, but we call upon all others to respect freedom of navigation. …

This is a legal case. The ship was asked to come to port; it refused. And our naval forces took action to escort it to the port. I think we shouldn’t read too much into it. Some people do try to read too much into anything that is taking place now in order to torpedo a process that is independent of all of these problems.

First Zarif pays lip service to Iran’s “respecting the freedom of navigation,” and then before the paragraph is over defends his nation’s act of piracy.

On Sunday, Eugene Kontorovich analyzed Iran’s legal claims and, in short, called Iran’s actions a “flagrant breach of international law.” Kontorovich explained that while there’s a concept of seizing a “sister ship” when liability is incurred by a company, the “sister ship” doctrine didn’t apply because even though the Tigris was operated by Maersk, it wasn’t actually owned by Maersk. But the seizure of the Tigris is aggravated by two other factors.

The discussion of sister ships is quite arcane, and ultimately besides the point. The arrest of vessels applies typically to those that have come into port. There is no right to arrest for prior or collateral obligations during an innocent passage through territorial waters. That is, in waters where ships have an international right to transit – such as the Gulf – they may not be molested at all by coastal states for the enforcement of outstanding maritime liens.

Thus the ownership of ships, the scope of the sister ship/associated ship doctrine, and so forth are entirely besides the point. Iran’s seizure clearly violates international law, and one might add, a branch of international law that is ordinarily well-respected, and quite fundamental for global commerce. Moreover, no maritime lien gives Iran any authority to detain the crew.

Even if Iran had a legal claim against the Maersk Tigris, it had no right to seize it in international shipping or lanes or to seize the crew.

You would think that the foreign minister of a nation that the United States is negotiating a treaty with admitting that his country flouted international law and norms would be newsworthy. But here’s how a news story about the interiew in The New York Times begins.

Demonstrating suave fluency in English and a familiarity with American history and law, Iran’s foreign minister said Wednesday that the United States would risk global ostracism if it were to scrap a signed international pact that resolves the Iranian nuclear dispute.

It’s framed to make Zarif into the reasonable one and anyone who disagrees with him unreasonable. There is no mention of the Tigris. Even though in the course of the interview Zarif effectively called Washington Post reporter, Jason Rezaian a spy, the Times only saw fit mention Zarif’s unctuous “hope” that  Rezaian would be cleared.

Similarly, in a column written by Ignatius, there is no mention of the Maersk. There’s just Ignatius desperately trying to infer some moderation in Zarif’s words. (Even more outrageous, Ignatius didn’t mention Rezaian, his colleague, at all.)

The silence about Iran’s piracy is important as it goes to its overall trustworthiness. Earlier this week The Wall Street Journal published a poll saying that Americans favored a deal with Iran over continued sanctions (the administration’s way of framing the issue) by 54% to 37%.  But what if the first half of the polling question had been along the lines of “would you prefer a deal with a nation that violates international law with impunity?” By not properly describing the nature of the Iranian regime, Americans can’t possibly make an informed choice in a poll.

But the problem is deeper than Americans perceptions of Iran. If Iran doesn’t abide by international conventions (even as it seeks to cloak its actions in home highly selective and subjective definition of  the rule of law) how can we expect it to keep its word on a future nuclear deal? That’s the question the administration doesn’t want to address and that’s the question that most of media chooses to ignore.

One other thing that’s important to remember is that Zarif (and President Hassan Rouhani) are often portrayed as moderates struggling against hardliners. Zarif’s endorsement of piracy is a reminder that he, too, is hardliner. Or as Victor Davis Hanson calls him, the Westernized Anti-Westerner.

Ribbentrop was another iron fist in a velvet glove. Well done, Matthew Continetti.

Yep. The little pirate is another lying sack. Admiralty law has for centuries supported the “arrest” of ships in port, and is one of the oldest of international norms.

You don’t get to do it at sea, and for obvious reasons; the bellicose act is dangerous to the ships and sailors involved, and there’s absolutely not need.

It’s amazing that the American pundit class is letting Iran and its propaganda spokesholes get away with this. But perhaps that’s a consequence of becoming enamored with liars like the Ozark Oligarchs.

There is no more ‘American pundit class’ for they are experts at nothing, and are mere team players for the left, often having no idea why. There are George Will and Charles Krauthammer, but they get confused by wolves in Obama clothing.

It’s not just that intellectuals are gullible, it is that they have been gullible in exactly the same way for so long. Even as early as the 1920s, totalitarian tyrants have been able to fool western leftist intellectuals by following these 6 simple rules.

1) Dress neatly but modestly and behave reasonably – no ranting, raving or carpet chewing!
2) Always couch your argument in the terms of moderate, universal justice. Avoid the abstruse political or theological jargon you use in your own discourse.
3) Always make it look as though you are a very busy, over-worked, important man granting an exceptional favour – for example, wave away phone calls, emails, interruptions from flunkies etc. Give them a bit more time than has previously been agreed.
4) Pretend that your target is an important cultural figure in his own right, even if you’ve never heard of him. Make sure he is put up in the best hotels, given a chauffeur and first class travel.
5) Show awareness of your target’s domestic politics – in particular, pepper your talk with little jokes about their own named paranoid right-wingers – your target already hates them more than he does you, so it creates a bond.
6) Drop in allusions to major western cultural figures whom you pretend to admire, even though any of their followers in your own country have long since filled mass graves

It’s a guaranteed recipe for success. It worked for Lenin, Stalin, Hitler, Mussolini, Mao, Castro and Ho Chi Mihn and now it is working for the Iranians and the Muslim Brotherhood.

Research has discovered that the more “education” people have the more easily they are conned!

That is the generalization that was made from the research.

I remember as a kid when I first learned the history of WWII and wondered how on earth the “good” nations of the earth could have possibly stood idly by while the Nazis began their atrocities. I read about Chamberlain and thought “… what kind of fool?”

Now I see the progressives in our own country, many so naive and ignorant of history and human nature, others blinded by their lust for power. They’re falling all over themselves to enable the Islamo-fascists, and in the process they’re going to arm Iran with a nuke.

I’m afraid future generations will look at ours, and we’ll be the subject of derision just like those people in the ’30s and ’40s who enabled “leaders” like Chamberlain.