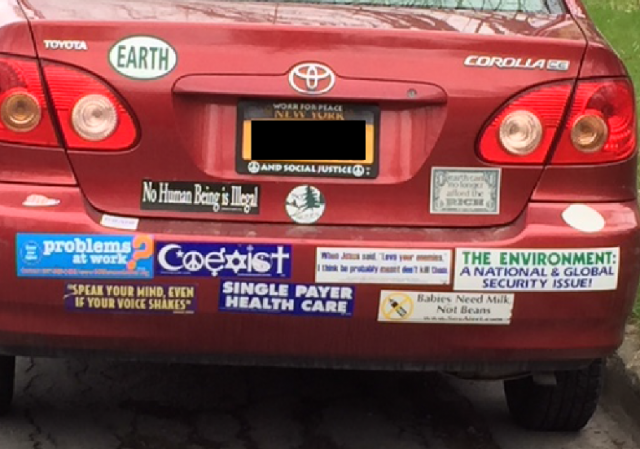 Do I get extra credit if I speak my mind even if my voice doesn’t shake?

No human being is illegal

But, they can be aborted.

New Phrase to use with the Proggies – we are not deporting the illegals just geographically aborting them.

That Proggie Democrat could get off Welfare if they stopped spending all their money on those worthless bummer stickers.

But maybe that’s all that is holding their Obama Car together…..

They’re totally bummed out as you can tell from the bum of their auto.

The one thing I think is funny is that there is no Obama sticker. Either they got the car post 2012 or they scraped it off. Anyone that has that much BS on their car had to have the ultimate Proggie mark of the included (known by others as the mark of the stupid) – Obama/Biden

There’s probably something a little unstable about anyone with that many bumper stickers on their car.

I see it as the vehicular version of writing in green ink.

I have always found them a little off, whether the slogans are to the left or to the right. I apply a progression. After two bumper stickers I start subtracting points from my estimation of the owner’s intelligence and emotional stability. For the third bumper sticker I subtract ten points, for the fourth twenty, for the fifth, thirty, etc. ect.

Around Asheville, NC I’ve come across drivers who are on their way to minus infinity. I’ve seen more than one Subaru with at least two dozen lame slogans pasted on. Many times the positions are inconsistent such as Support Obamacare and that old pro abortion motto Keep Your Laws Off My Body. Then there was the couple who custom painted a an entire school bus sized RV into a mobile Ron Paul for President billboard.

So many clever little Lefty stickers….and oh look!…the canvas is red too!

Self-righteous, man; but, where is the Love? Everything is so commercial today.

That’s when I reach for my “Dash-Mounted Rocket Launcher®”…