Will increasing dislike of Hillary upend her White House dreams? 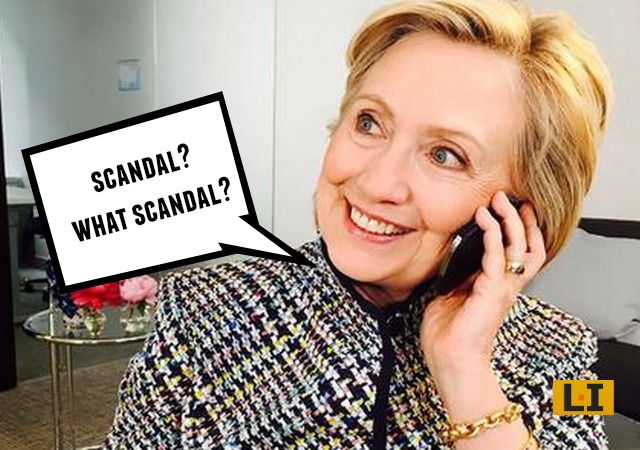 While Hillary’s approval ratings have hovered around 50%, her unfavorability rating has steadily increased since March. Now up a full 7 points since her presidential candidacy announcement, is Mrs. Clinton’s campaign facing imminent danger? 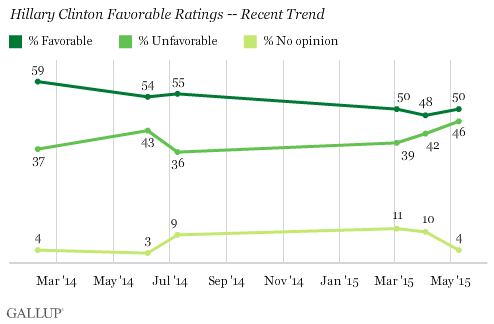 The last three months have been an important time for Clinton. Since officially launching her presidential campaign in mid-April, she has been deflecting criticism of her exclusive use of a private email address while secretary of state, and more recently, partisan charges of possible conflicts of interest stemming from the Clinton Foundation’s reliance on foreign donors. Separately, Clinton is scheduled to testify before the House Select Committee on Benghazi next week.

With her unfavorable rating up 7 points, there should be dancing in the streets, right? Not quite…

Democrats and those that self-identify as independents are unmoved by Mrs. Clinton’s scandalicious tendencies. With those groups, Hillary’s favorable stats remain static. It’s only Republicans who find Mrs. Clinton’s consistent inability to tell the truth off-putting, apparently.

But Hillary isn’t out of the clear just yet:

Hillary Clinton has thus far weathered the political storms swirling around her fairly well, with her favorable rating staying close to 50% since March, even as her unfavorable score has edged up, particularly among Republicans. Clinton still has to appear before the House Select Committee on Benghazi and may face further scrutiny over her email practices while secretary of state now that a federal judge has reopened a case probing the matter. For now, her supporters appear to be holding firm. But, should she be looking for ways to burnish her image among independents and Republicans, she might consider more strategic use of her husband on the campaign trail.

To add to the pile, the House passed a bill this afternoon that bans late term abortions, or abortions after 20 weeks of gestation up until birth. President Obama has already threatened to veto – but that’s pretty much all he does these days. Hillary, too expressed her displeasure with the House late-term abortion ban bill. Life News reported:

“Politicians should not interfere with personal medical decisions, which should be left to a woman, her family and her faith, in consultation with her doctor or health care provider,” Clinton’s senior policy adviser Maya Harris said in a statement on her behalf.

“This bill is a direct challenge to Roe v. Wade, which has protected a woman’s constitutional right to privacy for over forty years,” the Clinton campaign said. “The bill puts women’s health and rights at risk, undermines the role doctors play in health care decisions, burdens survivors of sexual assault, and is not based on sound science.”

Whether any of this is enough to topple Hillary from the Clinton Dynasty’s throne? I guess we’ll have to wait and see.

I have a problem with dynasties. Surely, out of a nation of better than 300M, the two main political parties can find someone to run for President who is not a Clinton nor a Bush.

Fascinating, yet this should not truly important to Conservatives. Spending so much time and energy on wondering who the Socialists will nominate is a fools task.

Conservatives need to determine who shall carry our banner and what our agreed objectives are. Nominating another RINO like Dole, McCain, or Romney, or especially another “W,” does not benefit Conservatives within the GOP. That should be our primary task and we need to concentrate on just that.

In other polls, Hillary is slipping among independents, and is well underwater on “trustworthy” already. Her strength is among Democrats who, as Krauthammer has noted, have nowhere else to turn. The left will overlook anything in their quest for power anyway, which is how we ended up with Bill and Obama in the first place.

It’s going to take an entire gallon of brain bleach to get that image out of my head.

The Democrat party is the older of America’s two major parties. Out of all their numbers, this vile woman is what they have become. Obama is as well also, but he got full cover by the MSM to shield him into office as well as during his tenure. The Left wants what it wants by any means necessary. The Dems have no one else because they are nothing else anymore. Twenty first century Communists with a smiley face.

Just as vile is the GOP being a Twenty-First Century sell-out, with a smiley face.