About that whole equal pay thing… 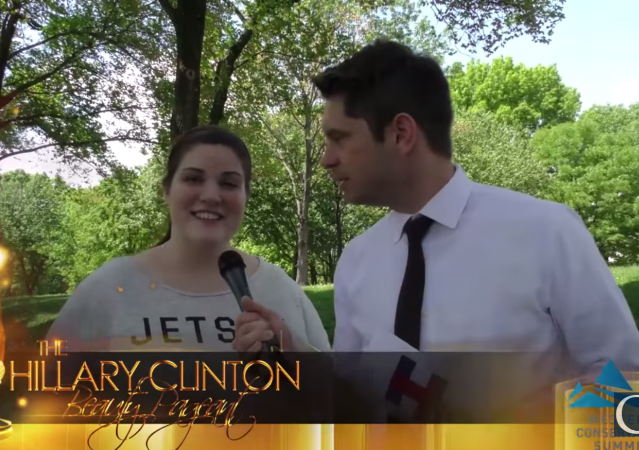 I love the Equal Pay debate. It’s one of the simplest tests of political acumen.

There’s just one problem with this whole Hillary the Salary Saint schtick — while serving as one of New York’s Senators, Mrs. Clinton paid year-round female employees 72 cents for every buck she paid their male counterparts. Oops?

Those numbers come report from the Washington Free Beacon, who analyzed the wages of then Senator Clinton’s staff.

During those years, the median annual salary for a woman working in Clinton’s office was $15,708.38 less than the median salary for a man, according to the analysis of data compiled from official Senate expenditure reports.

The analysis compiled the annual salaries paid to staffers for an entire fiscal year of work from the years 2002 to 2008. Salaries of employees who were not part of Clinton’s office for a full fiscal year were not included. Because the Senate fiscal year extends from Oct. 1 to Sept. 30, Clinton’s first year in the Senate, which began on Jan. 3, 2001, was also not included in the analysis.

But 72 cents on the dollar is on the higher side. As the WFB found, some years women working for Mrs. Clinton were only paid 65 cents for every dollar the dudes working for Hills were making. 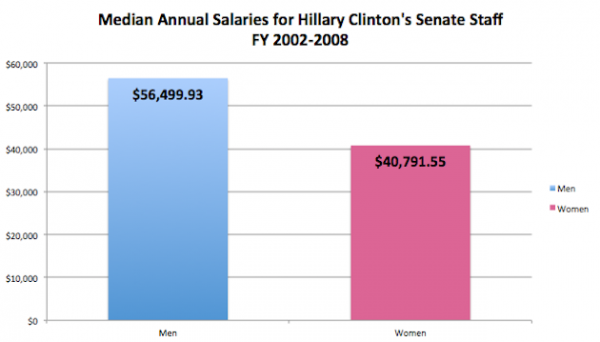 The responses to this little factoid are priceless. They range from, “really?!” to “if she’s for equal pay, then why did she do that? That’s a double standard…”

Ladies: Please ‘spain to this old-school T-Rex Guy what it is about Hillary that appeals to you. I don’t get it. My wife doesn’t get it. What ACCOMPLISHMENTS are most admired by you ladies? Surely, there’s a list you can post here that will clear it up for me. Right? EEeerrrrrrrr…Right?

Hi. I’m Henry. I’m male, but I am wearing a dress today. You want a list of Hillary’s accomplishments? No problem.

Say the word and I’ll post another ten of equal or higher worth.

Sheeesshh…!! I should’a thought of those Henry. Helpful…Very, very helpful.

I loved the video. Hits all the right notes. All the way down to making the “H” look like a crown.

“Mamas, don’t let your dau-ters grow up to be Walleyes!

Teach ’em to truthful and strong,

And get rid of a guy who is doing them wrong.”

The awesome power of “the big lie.”

Oops, almost forgot this article is about The Hillary! So, heck yeah, The Hillary needs to be told that she’s done wrong!

Still, one of these days, our lovely, and usually untalented, feminwarriors are going to tell us that women need to get equal pay to men regardless whether they’re doing the same job. After all, how’s the true Collective going to be established otherwise? Jazz hands everyone!

While I enjoy watching videos that expose the ignorance and hypocrisy of the prog drones, surely we all realize that these exercises don’t actually change the minds of any of the drones, right? Firstly, they’d need their own free-thinking mind in order for it to be changeable in the first place.

But more importantly, to these drones it doesn’t matter what Shrillary paid her Senate staff because that was, like, YEARS ago! As a good progressive, maybe she’s just EVOLVED on the matter, like right? That’s the beauty of being a progressive… you’re never accountable for anything you say or do because you can simply “evolve.” FORWARD!!!!

p.s. the fact that the entire underlying “equal pay” meme has been ruthlessly and utterly destroyed multiple times also doesn’t matter, because FEELINGS! WHOA WHOA WHO, FEELINGS! (that should be the Dim theme song).

Just at a guess, it would be helpful to to avoid blatant disrespect to people in public office, if you want to be persuasive to those of any other political camp.

As soon as you write “Shrillary,” you lose everybody from the near side of the big middle, on.

If you haven’t read the Autobiography of Benjamin Franklin, it is a good place to start.

How about “The Bitch of Benghazi?” Do you like that better? Shrillary is deserving of NO respect. Just wondering, do you go over to HuffPo and Slate and concern troll them about their “blatant direspect” to Conservatives? Didn’t think so. I’m tired of “we’re better than this” concern trolling. We are losing, in case you haven’t noticed. Being nice is no longer an option.

Sorry, but my respect is earned not given. And the idea that Hillary Clinton is deserving of anyone’s respect is utterly laughable. Surely I don’t need to enumerate the reasons for you.

But just in case, try this on for size…. there is a word for women who degrade themselves for money and/or power: whore. Shrillary is a whore. And anybody who would vote for a lying whore as POTUS is a moron. How’s that grab ya?

I’m thinking that a lot of people in the “big middle” don’t want to be a moron. It might make you uncomfortable, but mocking and derision works.

I suspect the average Hillary supporter would be shocked by the presentation of almost any fact.

It is a perhaps unrewarding endeavor, but still…

One of our roles as Breitbarts is educating the…well…rest of the country.

Hillary more than enabled Bill Clinton’s personal war on women. For a time in the White House she was in charge of investigating and harassing the women who said they were abused by her husband. She knew the women were telling the truth. The same way she knew the truth when on the Today Show she blamed the Vast Right-Wing Conspiracy for the rumors about Monica Lewinsky.

A chapter in Hitchens’ book NO ONE LEFT TO LIE TO http://tinyurl.com/n658qx2 is titled IS THERE A RAPIST IN THE OVAL OFFICE?

Hitchens ends the chapter this way:

But if the Dims nominate her they will still trot out the good old “war on women” meme, you can count on it. Because they’re just shameless liars; they don’t know anything but lies.

One aspect of Hillary’s campaign this time is that there’s no way she can get through this time without suffering significant losses to her credibility. So, perhaps this effort is all about the money and providing a nest egg for her and Bill’s final years, buffered from all her tormentors by thick layers of money.

Of course, were she to actually win the WH, she and Bill will never ever have to worry about money or anything else. Plus, Hillary will issue a pardon to Bill for anything he might have done in the past, plus she’ll pardon herself too, in that same way.

This campaign is win win for Hillary, regardless of the actual political outcome. She’ll allow us to eat cake.

We have to elect Hillary so women can have the same sort of economic progress as blacks have had under Obama.