When she gets around to taking questions… 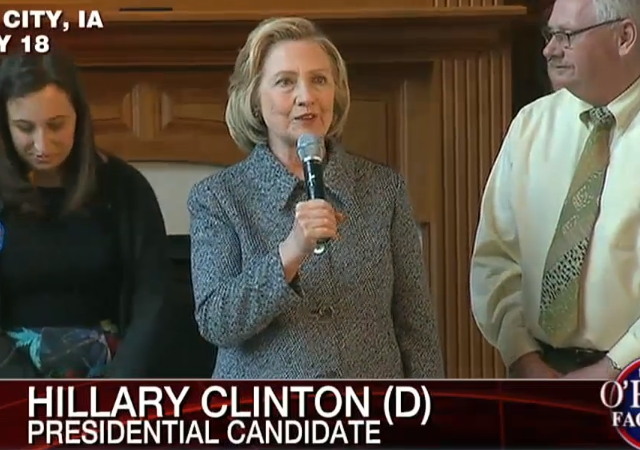 You may have noticed that our unbiased media is asking Republicans lots of questions about the Iraq War.

Hillary Clinton is the only 2016 candidate who voted for the Iraq War as a senator; she was also directly involved with the war in her role at the State Department. Perhaps she deserves a few similar questions—when she finally decides to take one.

Last night, Bill O’Reilly opened his show by discussing new initiatives America is taking to deal with ISIS, but as Charles Krauthammer pointed out, there are many questions Hillary Clinton still has to answer on this subject.

As a senator, she opposed the surge in Iraq and implied that David Petraeus was lying during his congressional testimony. Does she still agree? Clinton was the secretary of state when we pulled out of Iraq in 2011. Was that a mistake?

This whole video is worth watching, but if you want to see the part featuring Krauthammer, skip to the 5:10 mark.

Hillary Clinton’s refusal to answer questions is starting to get noticed on other networks as well. A CNN reporter recently noted that voters in Iowa are growing suspicious.

Jeff Zeleney: Voters In Iowa Getting The Impression Hillary Is Secretive

Hillary Clinton is nearing 40,000 minutes since the last time she fielded a question from the press and the media is not happy about it.

“So many reporters are saying, ‘Why isn’t she answering questions?’ This becomes a problem when so many voters start saying it and does this feed into the idea that she’s being secretive and not being open enough,” Zeleny said.

“Voters here in Iowa, Wolf, I can tell you, they have many questions for her.”

Hillary Clinton is secretive? What could possibly be giving people that idea?

Hillary Clinton at the State Dept.: “I only work here.”

Hillary Clinton at the State Dept.:
“I voss only following orders – of herr dear leader Obama……”

Lest anyone forget, it was the official policy of the Clinton administration that Iraq had WMDs. If Hillary is to claim that the WMD information was a lie, then she is accusing Mr. Bill’s administration of lying as well as Bush’s. Hillary is just like Bill except she cannot lie well, she just is not all that bright to keep herself out of painted corners, and has the charm of a cactus with poison needles.

Remember – it was Obama / Clinton regime change in Lybia and Syria that spawned ISIS. It did not originate in Iraq.

Are we still holding fire on Hillary? Any day now, she is gonna say something that will sink her! The MSM is growing tired of being ignored!

“…we must suspend disbelief..” Hillary to General Petraeus at Senate hearing on the (Successful-Victorious) Surge. I wished for someone near her arrogant seat to reach over and smack her openhanded.

These MSM-Pressies are self-parodying lapdogs in the extreme. Jeepers, Koolaid Consuming Pinheads, she’s avoiding questions from you hard-driving representatives of Freedom(Cough)of the Press??!! Ya think…??

Oh, puh-leeze! Answering questions from lower paid staff is beneath Her Hillaryness. Too bad Little George got caught up in his own little scandal otherwise ABC would have had an August Sweeps bonanza when he would interview Herself! (heavily produced, reviewed, scripted and, of course, only Approved Topics would be covered).

Wait until Her Healthyness Michelle declares. Then we’ll see a real fighter.

Yeah, they should ask Hillary that, some day, over the rainbow. BUT, the narrative needs to be negated regardless. The Brain Williams, Stephanapagus flying monkey media will never betray her with such “offensive” questions.

Krauthammer states it well, in that Obama himself said he was leaving a victory behind in Iraq. So yes we should have gone in to Iraq. Bush won, then Obama/Hillary screwed the pooch. There was more work to do, Obama ran away apologizing, leaving our hardware and ten thousand Christians for ISIS, as a parting gift.

The left’s position and revision is that “Bush’s War” was a mistake and failure. Now we have most Republicans on record agreeing, at least on a qualified basis. If they concede the whole war was a mistake, what will they say about dealing with ISIS NOW?

Our candidates instead have to claim that same purple finger Iraq victory Obama claimed, then clearly differentiate the Obama/Hillary surrender to ISIS. Hillary can then try to defend herself or stay in hiding, but her “prosecution” will be under way.

It is not an open rhetorical clever question that we must wait on Hillary to answer. We know SOS Hillary and Obama surrendered our gains, against all military advice. (That was well depicted by photo-op Obama smiling with traitor Bergdahl’s parents, while releasing five Taliban generals without notifying Congress)

“Blame Bush” worked for the left, but “Blame Obama/Hillary” has more teeth, as I see it, the latest tooth being Ramadi. Bush won it, Obama gave it up. Hillary lied (that video), our ambassador died.