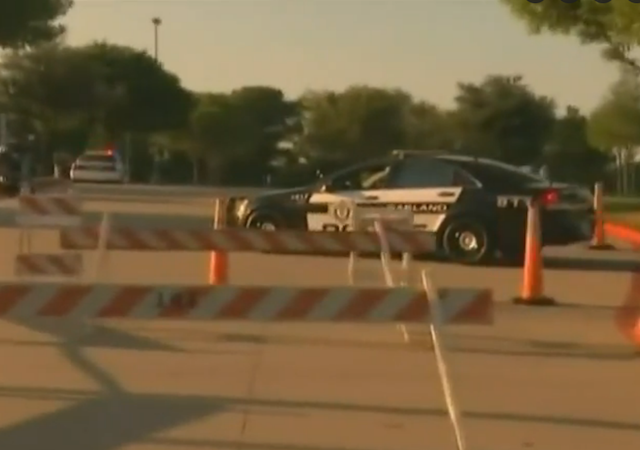 Reports rolled out early this morning that one of the gunmen taken out during last night’s shootout in Garland, Texas has been identified as Elton Simpson. Elton Simpson was shot and killed after he and an accomplice pulled up to a “Draw Mohammed” free speech event and attacked a security officer.

According to ABC News, the FBI and a bomb squad began an investigation of Simpson’s north Phoenix home, where he is believed to have lived with his accomplice. This isn’t the first time the government has conducted investigations into Simpson’s jihad-associated activities; he was convicted five years ago of lying to officials about plans to travel overseas and allegedly join a terror organization.

The New York Times laid out the history of allegations against Simpson:

In 2010, federal prosecutors in Arizona charged Mr. Simpson with plotting to travel to Somalia “for the purpose of engaging in violent jihad,” and then lying to a federal agent about his plans. A judge found him guilty of lying to the agent, but said the government had not proved that his plan involved terrorism, and sentenced him to three years’ probation.

The police and F.B.I. agents in Phoenix searched an apartment believed to be connected to Mr. Simpson, with much of the Autumn Ridge apartment complex cordoned off through the night. At the same time, the F.B.I. office in Dallas confirmed that it was providing investigators and a bomb technician to aid the police in Garland, a city just outside Dallas.

Officials did not give a motive for the attack Sunday evening, but drawings of Muhammad, considered offensive by many Muslims, have drawn violent responses in the past. Shortly before the shooting, messages were posted on Twitter with the hashtag #texasattack, including one saying, “May Allah accept us as mujahideen.”

The Huffington Post grabbed a screenshot of several other tweets related to the attack: 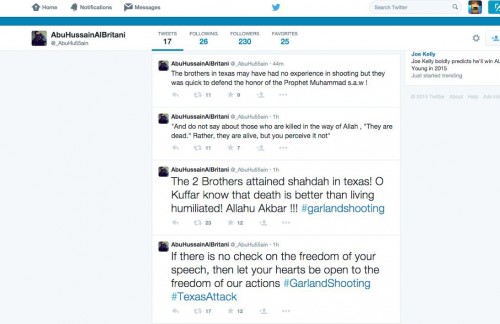 Was Simpson the kind of guy to go on an all-out jihad in the United States? His former attorney says no:

Kristina Sitton, who represented Simpson in the 2010 trial, said her former client had been on a no-fly list and that the FBI had attempted to get Simpson to cooperate with them, even after his conviction. She saw him, she said, as “harmless.”

“He grew up the most normal guy. Just a normal high school guy… Converting to Islam seemed like a good thing for him. He had been going down a bad path and then he found Islam,” Sitton told ABC News. “He never struck me as someone who would do this sort of thing. I’m not a bleeding heart, I’m a Republican. I’ve seen some pretty bad guys and he seemed pretty normal.”

Clearly, “harmless” is no longer being included in the list of buzzwords used to describe Simpson.

Having lived and worked in Dallas, I know the people in Garland, Texas very well; they’re not going to take this lying down. Please keep them in your thoughts and prayers as they deal with these terrifying (and bizarre) developments.

I think you meant “He chose… poorly.”

“Converting to Islam seemed like a good thing for him.”

How can converting to a philosophy of violence and bigotry ever be considered a good thing for anyone?

That’s today’s Democrat for you.

Come on! You just know he’s an Obama supporter – most likely voting for Obama dozens of times….

Part of the appeal was that he no longer had to bend over for gays and women.

Anyone else notice that those who are found to have committed terrorist acts in this country are usually those who have already come to the attention of the government as . . . wanting to commit terrorist acts? And they are left strictly alone until after the acts. However, if you call for the government to follow the law and the Constitution, you are considered an enemy of the state.

We spy on literally everybody in this country, and yet somehow the Jihadi’s always get through.

What you carelessly left out renders your comment incendiary.

But for God’s sake, don’t forget to then place the drawing in a jar of urine so leftists won’t find it offensive and the NY Times will be able to print a picture of it.

Don’t you get the logic?

The only thing mohammad ever drew was a sword.

We saw what you did there. Well said!

Well, to honor the spirit of the wounded security guard, (plus, I was mad at the Muzzies!) I did this cartoon last night, but I can’t seem to get the image to post here with the html stuff.

(PS: I didn’t draw the figure, I just found it on the Internet and then erased stuff, and added the poetry stuff.)

Ol’ Elon’s not aspiring to much of anything of late.

Today on Twitter, Marc Lamont Hill and his ilk are playing “The Big ‘But’ Game.”

They’re all for free speech and all, BUT … Pamela Geller, Charlie Hebdo, etc., are the real danger in these leftists’ delusional eyes.

When a Western Leftist says, “The enemy of my enemy is my friend …”

“The Big ‘But’ Game” stinks as bad as it sounds.

Well, if this “aspiring jihadist” intended to graduate from Jihad U, he flunked. Badly. Because he tried to do it in Texas, that’s why.

The genius types over at PMSNBC are of one voice: Those folks exercising their 1st Amendment rights bought Slime Simpson & his bud on themselves. Yep, you heard it here. You didn’t hear it at PMSNBC for the obvious reason: NOBODY watches those pinheaded pukes.

Who put the baab in the Al Shabaab? Who put the hood in the Muslim Brotherhood? Who put Allah in the Ayato-allah? Who put the ram in the Ramadana-jihad?