The not-so-tolerant left fears nothing. 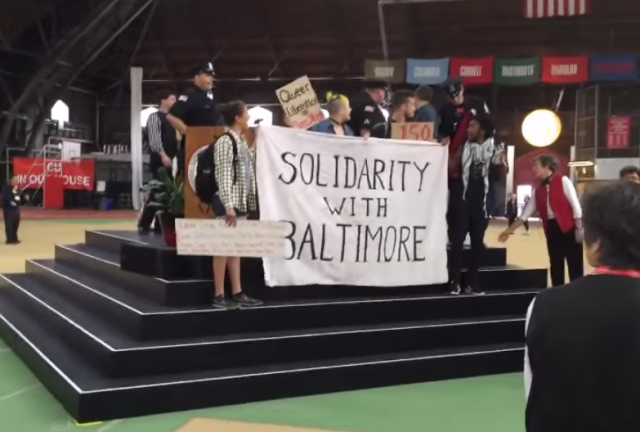 Let me preface this by asking: Is anyone really surprised?

This past May Day students and faculty at Cornell marched across campus and sat in a street intersection for over an hour delivering riveting speeches about everything they detest about this country, their university, and their peers.  They later paraded through the farewell party for Cornell’s outgoing president of nine years, and for about twenty minutes chanted and delivered speeches from the stage where a jazz band was playing .

You can read my more comprehensive recap of events over at The Cornell Review.

At the street intersection and on the band stage, protesters took turns delivering short speeches and tirades covering a range of topics, including, but not limited to, the following: systematic racism, sexism, rape culture, the riots in Baltimore, microaggressions, Cornell administrators and trustees, Cornell’s occupation of formerly indigenous lands, capitalism, Israel, the NYPD, oil companies, patriarchy, whiteness, masculinity, and straightness.

You might be wondering how they manage to connect all these topics. The answer: “intersectionality.”

There really was no point in refuting the protesters’ “arguments.” Besides, they wouldn’t want to hear them. Anyone who tries to reason with them is making them feel “unsafe.”

Obvious question: Would such a diatribe against non-straights be tolerated on a campus like Cornell?

Rags you are the quintessential intersectionalist. You bring all the inane ‘oppressed’ together as one and call them “The “Collective.”

Regarding masculinity, the avatar doesn’t do you justice, Rags. OTH, it does work for Henry ‘cuz he’s a lumberjack in a very intersectionalist way.

“I did not have intersects with that woman…”

My use of “Collective” derives from Albert Jay Nock, who you should get to know if you don’t already. The use of “the Collective” is both considered and apt, I submit.

As to my image, think of Uncle Remus…the Avatar Baby.

OK, now you’ve got my interest: “the avatar doesn’t do you justice, Rags”- I must be missing something, since the only avatar on Rags’ postings is the generic placeholder. I DO see an avatar on Jennifer’s posts, and on LukeHandCool’s posts, and many others, but not on Ragspierre or n.n’s posts.

Even tried looking with other browsers, but still don’t see any avatar on Ragspierre’s posts.

Can someone please explain? (This is obviously much, much more important than Cornell or Baltimore, as anyone can plainly see!)

I’m confused. I see the Collective, then I look at the 1 Percent, and I see the identical faces – no one different.

Solidarity with the Baltimore black and white, male and female, police officers through due process until conviction or acquittal do us part.

As for the rest, Too many labels! and not enough discernment.

Okay, I was too young and in the wrong place to witness the Beatles’ impromptu and final concert on the rooftop of Apple headquarters.

But now I can say I was sitting at my computer one Saturday afternoon having a beer when suddenly, at Open Mic Night at the Loser’s Lounge, I saw PottyMouthTrained open for The Terrible Twos.

Beneath that Warholian portrait of Che the Butcher: MUERTO!!

Somebody is going to be very embarrassed, some day in the foreseeable future.

Let’s hear it for Keith Olberman’s alma mater – indoctrinating students in lib/prog mindlessness for a mere $29,000.

Try $47,286 (just for tuition and fees)! Thank God my kid didn’t go there – I’d be really p*d off if I paid that kind of money for her to be exposed to so many leftwing lunatics on a daily basis.

But for that they get special ed classes in “How to be a Racist” and “How to be a Hyper Bigot.” That surely counts for something……

They have a lot of phobias that need names.

and there a a whole lot of ignorant idiots that need mocking.

No clue why. Just Do It.

anyone who sends their child to that school should be arrested for child abuse.

and it’s going to be amusing when these ignorant savages try and make a living in the real world… there are only so many government and NGO j*bs out there where they can continue to indulge in their fantasy world. real businesses that need to make a profit to stay open will not be moar than their special snowflake souls can take…

but then again, stupid is supposed to be painful, so that you learn from it.

Hey now, I go to this school and have many fine friends and professors. These hooligans represent only a small minority of the student body.

Casey, I work in higher ed and have three kids in colleges across the country, so I think your comment is spot on. The majority of faculty and students work hard and teach and learn. The students and profs behind events like this are a distinct, but highly vocal minority. A few of them will become hardened true believers, but more of them, especially when they are out looking for work, will be rubbing their eyes, yawning, and asking, “what was that weird dream I just had.”

I watched most of the video, until I couldn’t take it any more. What a tedious bunch of people! Sitting around listening to each other gripe about everything. Not a word of positivity about anything. They hate this, they hate that, they hate the other thing.

Is this what education has come to? The educated person is someone who has learned to hate all the right things?

These children need to spend a few years stacking hay bales, or gutting fish in a cannery, or digging ditches. Then they might appreciate the value of education, and actually get something out of it.

Did anyone hand out play doh or coloring books?

Just more evidence of my claim that the average Ivy League student is probably in the bottom quintile of intelligence.

As far as I am concerned an Ivy League degree is prima facie evidence that you are an entitled idiot with no concept of how the real world works and I wouldn’t waste my time considering you for a position. Then again those who are obtaining such degrees today wouldn’t want to actually work for a living so it is unlikely that I would be presented with such a decision.

Ivy League freshmen are the cream of the crop by the stats (except of course admitted for “diversity” reasons and not academics: race, creed, nationality, high cheek bones, etc.).

The truly exceptional can excel and thrive there due to the access to some of the leading minds in the world in a variety of fields. And those with a narrowly drawn STEM schedule can prosper as well.

But the rest tend to fall prey to the relentless indoctrination in the humanities/liberal arts curricula. And so, while they may have wonderful minds, they are not only trained to use them to best advantage, they are actually imbued with contorted and skewed ways of thinking.

So in many things – and most political or social issues – they do come out less able than when they entered.

Ah, but don’t forget the strong movement to force a “core curriculum” on ALLLL students, regardless of their discipline of choice.

This is largely responsible for making most degrees five-year slogs, while driving every student through the Collectivist indoctrination chutes.

Why do taxpayers subsidize all this nonsense? Get us out of the business of paying for institutions, faculties, and students to pile our hard-earned money into their bonfires of vanity.

If Cornell can thrive in their current path while paying its own way, and their students doing the same, good for them. But the free market has a great genius for sniffing out rotten products and rejecting them, so good luck.

Cornell needs to round up these people and send them home of a year or two of “seasoning” before letting them return. A year of work at the local Starbucks or grocery store should help them learn a little responsibility.

Frankly, I wouldn’t want them anywhere near my groceries.

Send them to North Korea with a special cook book entitled
“How to Serve Man.”

Require 2 years service In the Israeli Defense Forces for them…. Being at the pointy tip against their Palestinian sympathizers might work wonders… or open up gaps in IDF due to their stupidity.

Twain? I forget. “Better to remain silent and have people think you a fool than to say something and confirm it.”