DoD: ISIS gains in Ramadi not expected to last

DoD: ISIS gains in Ramadi not expected to last

Not a turning point 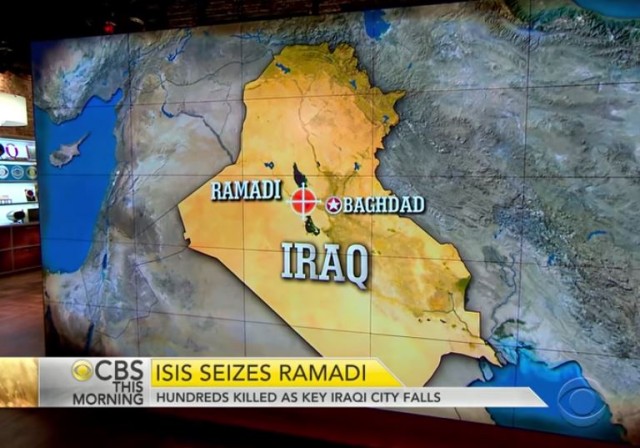 “To read too much into this is a mistake,” Warren said. “This is one fight, one episode, in which Iraqi Security Forces were not able to prevail –- today.”

While ISIL was able to gain the upper hand in Ramadi, “what this means for our strategy is simply that we — the coalition and Iraqi partners — now have to go back and retake Ramadi,” Warren said.

Defense Department officials have always said there would be ebbs and flows in Iraq’s fight against ISIL, he said, adding that “it’s a difficult, complex, bloody fight, and there will be victories and setbacks.”

Iraq and coalition forces will retake Ramadi, Warren said, “In the same way we are slowly but surely retaking others parts of Iraq with Iraqi ground forces, combined with coalition air power.”

Ramadi has held several places in the Iraqi war lexicon: flashpoint, stronghold, symbol. This reality was reflected in last month’s meltdown over Joint Chiefs Chairman Martin Dempsey’s comments about the longterm symbolic importance of the city as compared to other areas in the current conflict zone:

The city under attack from ISIS fighters is “not symbolic in any way. It’s not been declared, you know, part of the caliphate, on the one hand, or central to the future of Iraq. But we want to get it back, Gen. Martin Dempsey said at a news conference last week.

He explained at the time that the fight against ISIS “is not brick and mortar” and “I would much rather that Ramadi not fall, but it won’t be the end of the campaign should it fall,” Dempsey said.

Dempsey’s April comments are reflected in the Pentagon’s current public position on the status of Ramadi. The DoD has said that they expect “ebbs and flows” in the battle to defeat ISIS, and that setbacks and loss of ground should be expected, and not seen as the end of the road for coalition forces.

For what it’s worth, Semir Muratovic, a former infantry rifleman who served in Ramadi in 2009, does a great job of putting the loss of ground in perspective:

When this generation’s warriors fought and died, they did so while achieving the missions our elected leaders chose for them. They took Iraq with speed and a display of might that would give any potential foe reason to pause and reconsider. When it comes to war-fighting, the men and women of our military have no equal. Their honor and their sacrifice lives in that service, not in score-keeping of who holds what ground.

Ramadi and Anbar province are forever etched into my memory. My fellow Marines and I with 2nd Battalion, 23rd Marines, trained hard to deploy in the summer of 2009, only to arrive in a city that was mostly peaceful. Our battalion saw limited action, our company didn’t get into a single firefight and we didn’t trigger a single improvised explosive device during our time there.

This atmosphere wasn’t created overnight. For this fragile peace to have existed, those in Ramadi before us had to sacrifice and bleed. They gave us the opportunity to train the local forces and try to prepare their city for a new Iraq. Just like those before us, we did our best. In every war, you can’t hold ground forever. Over the years, those serving in Ramadi had different goals, but all served as means to larger ends. Whatever was asked, our military did it.

Whichever perspective you take on the fall of Ramadi, however temporary, it remains clear that the US and coalition forces could end up fielding significant propaganda issues as a result of the Iraqi army’s retreat:

Beginning almost a year ago, the Islamic State carved out, across large swaths of Iraq and Syria, a terrorist state of sorts that Mr. Obama deemed intolerable. He said in September that it is a threat to “the broader Middle East,” including U.S. citizens and facilities, and “if left unchecked . . . could pose a growing threat beyond that region, including to the United States.” Yet he refuses to commit the Special Forces and military assistance that could meet that threat, portraying any alternative to his minimalist policy as being “dragged back into another prolonged ground war.” In fact, Sunni allies in the region will be reluctant to work with the United States until it has a Syria policy, and Sunni tribes in Iraq will not confront the Islamic State unless they believe the United States will stand by them. Every conflict will have ups and downs, as administration spokesmen said Monday. But it is Mr. Obama’s unwillingness to match means to strategy that threatens to prolong this war.

DoD officials insist that the overall strategy to defeat ISIS is working; wrapping up his comments, Warren stated, “[w]e believe the Iraqi Security forces, along with coalition air power, will defeat ISIL.”

Let’s hope that’s not just another piece of propaganda.

“To read too much into this is a mistake,” Warren said. “This is one fight, one episode, in which Iraqi Security Forces were not able to prevail –- today.”

It’s much easier to defend a position than it is to take one. The murder, rape, pillage and destruction is only an IS resupply mission.

It is significant that Al-Qaeda ejected the Daesh because they were too horrifyingly violent. The reason the Iraqis eventually chose to side with the Coalition was because of Al-Qaeda’s brutality.

Perhaps the solution to the Islamist Perversion is analogous to what really contained the ebola virus in Africa: quarantine, and let it burn out on its own. Let Muslims do the heavy lifting fight them, and put an end to them.

The Obama administration, in their infinite wisdom, have already set our country on this path, in their thorough quest to downgrade the standing of the US, worldwide. In their view, we are the problem, not the Daesh. Of course, this course will entail a significantly higher butcher’s bill than that of the Bush administration, which tee’d up a SOFA agreement to maintain the stability of Iraq. However, this administration views large numbers of dead foreigners as a mere statistic they can blame on George Bush.

Yeh. We’re luring them into a false sense of security by letting them take victory after victory.

Ah, the Philadelphia Phillies theory of winning in action.

Let’s hope that’s not just another piece of propaganda.

What a bizarre statement. There’s nothing in this item which isn’t propaganda, and feeble propaganda at that. Wishful thinking, comparisons of apples & oranges, some self-important puffery from Obama, and more wishful thinking … no substance whatever.

Agreed.
I feel badly about having reached the point at which I disbelieve statements from the pentagon as much as I disbelieve everything obama says. I suppose I have had my head in the sand about this.

I think the Germans said that every time Patton whooped them.

Funny how I don’t remember any of the great generals, admirals or politicians from WWII saying that losing Guadalcanal, Midway or Monte Cassino would be fine.

“If we lose Lexington and Concord, no biggie. We can always come back another day of our own choosing.” – Gen George Washington

“Just wait until they take Baghdad. THEN we’ve REALLY got ’em over a barrel…!!!”

Not sure I agree with this. If ISIS stormed your neighborhood, I’m pretty sure there’d be a different civilian reception.

When our COIN efforts got the elders not liking the terrorists- they made short work of evicting them. What’s changed?

I’m betting there is enough civilian weaponry to make the ISIS reception unpleasant, yet there they are.

When they recover territory from ISIS, they tend to be able to hold it, but it is slow going, and they haven’t been able to stop them from taking territory yet.

I expect ISIS to be evicted from Ramadi. But it will be Iran and it’s Shiite militias that do the job. Perhaps with the help of our air power (?!?!) but our “Iraqi partners” in the form of Iraq security forces won’t be a factor. Not unless we deploy US ground forces to act as portable spines to prop them up.

Also don’t expect the Sunni tribes that helped us evict al Qaeda during the Anbar Awakening to help us again. Not after we abandoned them to this predictable fate in 2011.

“Let’s hope that’s not just another piece of propaganda.”

Congratulations for giving yourself that caveat/out, even though hope is a broken reed (Isaiah 36:6 ).

Yeah, I was right.

I know this is going to sound far-fetched, but I think this has been the plan all along. And by all along I mean since before he publicly demonstrated he didn’t want US forces in Iraq, he didn’t want a Status of force agreement with the Iraqis, and ignored his senior military commanders’ warnings that if US forces pulled out he’d be creating a dangerous power vacuum.

It isn’t that he didn’t believe them. It’s just that he kneww who he wanted to fill it. He doesn’t just want a nuclear deal with Iran, he wants a rapprochement. This is just another concession to the Mullahs.