Conservatives on Campus “have to be smarter, better prepared”

Conservatives on Campus “have to be smarter, better prepared”

“because it’s you against a lot of people” – My appearance on The Craig Silverman Show (Aurora, CO) 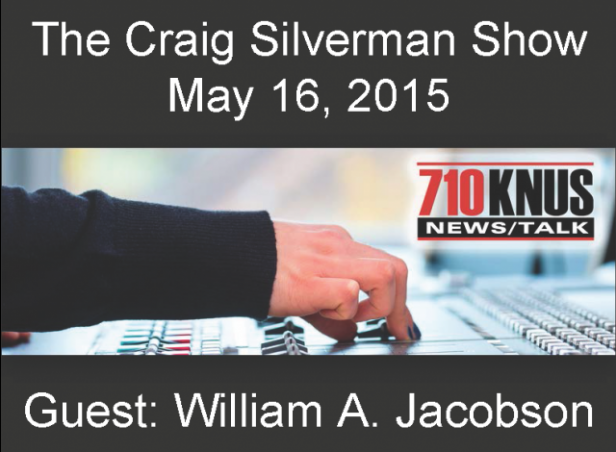 The conversation covered my background, what it means to be a conservative on campus, the anti-Israel boycott movement, the Pope on a Palestinian “state,” the Pew Poll on Christians, and the fate of Christians in the Middle East.

On the anti-Israel boycott movement:

“We’re dealing with people who really are just outright liars. And I say that all the time because that’s what they are. And they just make stuff up, they twist facts, they ignore facts.”

In their hearts, they truly do not accept the existence of a majority Jewish state in the Middle East. And that’s the heart of the problem. And until that changes, where you draw the lines on a map aren’t going to make a difference.

No country in the world is expected to commit suicide, except the West expects Israel to commit suicide and it’s not going to do that. What will change that equation is the day the Palestinian people and their leaders acknowledge not just that there will be this entity called Israel, but that it is the homeland of the Jewish People. And that recognition has to be reciprocal.

On the “decline” of Christians in America:

It is a jam-packed 36 minutes. Can you take that much of me?

“They are just outright liars”. Their emotions, actions, intolerance and basic conduct are all covers for the most basic element of the “liberal”…he is a coward.

Interview is at http://craigsilverman.podbean.com/ in hour 3 at the 18:00 mark.

“Can you take that much of me?”

As a matter of fact, yes.

“No country in the world is expected to commit suicide ..”

Well, by letting in all the Spanish-speaking, 3rd-world, illegal aliens and others … we are doing just that. Cultural and economic suicide. Pat Buchanan is 100% correct in his “Suicide of a Superpower” book.

It wouldn’t matter if they are Irish or Asian. You aren’t a nation if you don’t manage your borders AND your population.

One reason Christians aren’t rising up more, in my view, is the churches are largely marginalized at the top. We had the pope come out of the closet in favor of global warming baloney, his version of liberation theology, and his cheers for Palestine. But other churches have their peccadilloes as well, such as gay ministers, social justice agendas, or various liberal or globalist concessions.

Individual churches, or leaders in a church, need to coordinate conservative actions on their own, without approval from the church governing bodies. They perhaps need a tea party “back to the fundamentals” movement, but back to the Bible, instead of the constitution. (or back to both)

Maybe informed lawyers in church could run Christianity in America type seminars, delineating the importance of keeping Christian belief and value in our culture, while not having laws for or against religion (separation). That could offer real “meat of the word” for adults bored with typical mealy mouthed sermons.

Christians should have a sense of mission, and the current “war on Christianity” offers a good platform from which to launch. The destruction of Christian churches in existence for nearly 2000 years should bring a sense of urgency to the forefront.

I’ve said the same thing for a long time.

You have to be much smarter, better informed, and able to withstand being greatly outnumbered if you dare to voice conservative opinions in public, especially on a university campus.

Being just 18-22 years old makes the feat much, much harder.

My hat goes off to young conservatives on campus. I admire you so much for standing against all the credulous, bandwagon-riding, mindless pop-culture supported crowds.

As Greg Gutfeld once said, “The engineering major with back acne was far more bad-ass than the coffee house commie.”

You young conservatives are the true non-conformists on campus. Not the posers who try so hard to be different and end up being all alike.

LukeHandCool (who will have to listen later today, and who isn’t necessarily too busy to listen right now but who knows he needs to brace himself to listen to that guy go on for 36 minutes)

American conservatives are revolutionaries, not anarchists who serve the establishment of monopolies, especially through authority.

South Africa was asked to commit suicide. The choice to engage Israel with recycled tactics used to marginalize and neutralize native South Africans is telling and exposes the special interests involved in the anti-Israel campaign. Its their misfortune that they cannot identify a charismatic leader from Hamas to lead the charge against the Fatah faction, and that Israel has perhaps insurmountable domestic and global leverage.

Americans are asked to commit suicide, literally, with the pro-choice or selective-child policy that offers a wicked solution to a “wicked problem”. Also through displacement and replacement with excessive and unmeasured (i.e. illegal) immigration, [over-]regulation, inequitable trade agreements, progressive devaluation of capital and labor, normalization of behaviors antithetical to evolutionary fitness, etc.