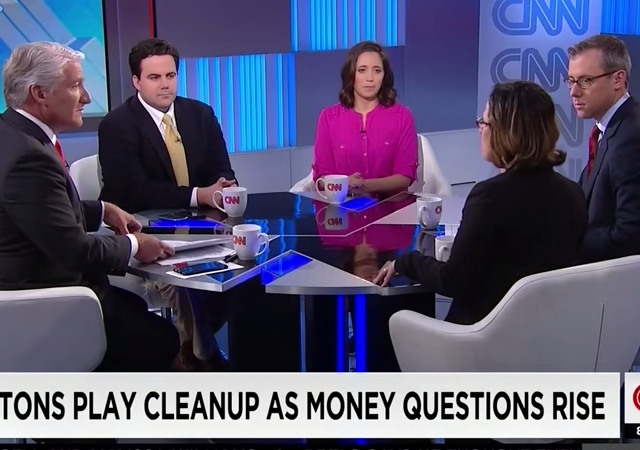 Hillary Clinton is trying very hard to frame herself as a candidate who can identify with average Americans, but the vast wealth she and her husband have accumulated through giving speeches conflicts with that message.

Philip Bump of the Washington Post recently pointed this out:

The Clintons made $700,000 from speeches the day after Hillary’s ‘dead broke’ comments

On January 6, 2014, Hillary Clinton gave a speech on behalf of GE at an event in Boca Raton, Fla. For her time, she received $220,500 — meaning that, six days into the year, the Clintons’ household income was already four times the median American household income for 2014.

As is now well known, that was not the last speech a Clinton gave last year. The Post has tracked those appearances and the fees they generated. We took that data and plotted it by calendar day.

Most of the events were in the first half of the year. On June 9, at the outset of her tour for her book “Hard Choices,” Clinton’s now-famous comment about being “dead broke” on leaving the White House aired during an ABC News interview. By that point, the two had already made over $11 million in speaking fees for the year. The day after the comment became public, the couple gave three speeches, grossing $700,000 in fees.

This morning, a panel on CNN made similar points. Maggie Haberman of the New York Times suggested that the wealth issue has bigger legs than Hillary’s email scandal.

Video via the Washington Free Beacon:

Hillary announced that her unofficial campaign slogan of ‘I can be bought’ is officially changed to ‘You will be bought.’

Branca needs to do a cartoon where Hillary commiserates with a hobo on the street begging people for handouts saying something along the lines of … “I can understand your pain. I had to watch Bill humiliate himself too asking $500,000 a speech. It was heart wrenching, but we were so broke.”

Hillary Clinton is a cartoon.

Clintons lie. They will lie to your grieving face, standing over the flag-draped coffins of dead Americans they put in a deadly situation.

And they’ll hug you, pretending to care.

They’ll lie about EVERYTHING, and they have, do, and will.

Got to get the message to the low-information voters. One simple graphic: one pile of money labled “Average Annual Income” another (much larger) pile of money “Average Hillary Income for one speech” Title: “Hillary says she’s just like the rest of us”

Yes. To the fine folks at CNN and the NY Times, Hillary’s possession of wealth is a much bigger point against her than her lifelong corruption and pathological dishonesty.

At this point, what does it matter?

If only we had a nice, short, three letter word to express such an idea.

Has ‘illary been around real Amercans for any length of time w/o demanding financial compensation?