Speaking fees are the Clintons’ payola, but we repeat ourselves. 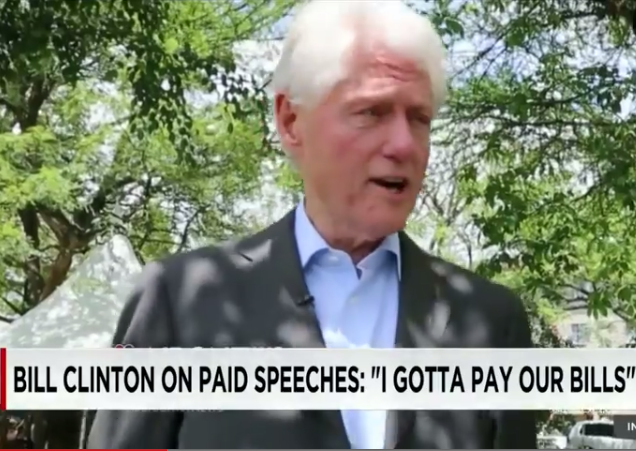 The Clinton Foundation is in the process preemptively coming clean on problems before it gets caught.

Will even mainstream media reporters smelling scandals in the murky world of payments to the Clintons and influence peddling, Hillary’s handlers are not waiting for the skeletons to be found. At least not the one buried near the surface.

The Clinton Foundation reported Thursday that it has received as much as $26.4 million in previously undisclosed payments from major corporations, universities, foreign sources and other groups.

The disclosure came as the foundation faced questions over whether it fully complied with a 2008 ethics agreement to reveal its donors and whether any of its funding sources present conflicts of interest for Hillary Rodham Clinton as she begins her presidential campaign.

The money was paid as fees for speeches by Bill, Hillary and Chelsea Clinton. Foundation officials said the funds were tallied internally as “revenue” rather than donations, which is why they had not been included in the public listings of its contributors published as part of the 2008 agreement.

Former President Clinton was the biggest earner for speeches, giving three that brought in anywhere from $500,000 to $1 million.

Both he and his wife gave a smattering of speeches to foreign companies and other organizations for anywhere from $250,000 to $500,000. Bill Clinton spoke to Thailand’s Ministry of Energy, China Real Estate Development Group, Ltd, and Qatar First Investment Bank; Hillary Clinton spoke to Goldman Sachs, Citibank and JP Morgan Chase, among others.

Why does it matter?

Because as Fuzzy pointed, Clinton Speaking Fees Just Another Form of Payola.

We also recently learned that apart from the Foundation, the Clintons made $25 million in speaking fees since January 2014:

Hillary Rodham Clinton and former president Bill Clinton earned in excess of $25 million for delivering 104 speeches since the beginning of 2014, a huge infusion to their net worth as she was readying for a presidential bid.

The Clintons revealed their recent income as paid speakers and other aspects of their personal finances in disclosure forms filed with the Federal Election Commission on Friday [May 15].

Until Friday’s financial disclosure filing, there had not been a complete picture of which groups she addressed on the speaking circuit or how much she made.

According to the disclosure, Hillary Clinton delivered 51 speeches in 2014 and the first three months of 2015, earning more than $11 million. Her fees varied, but she earned as much as $315,000 for speaking to eBay in San Jose on March 11; she also collected $325,000 for speaking to the technology company Cisco in Las Vegas in August.

There’s nothing wrong with people cashing in. But when that person is the likely Democratic nominee, it raises questions.

That Hillary would be the nominee has been presumed for several years, so these payoffs take on a different meaning than the fat fees paid to speakers routinely. By classifying the payments as “revenue” instead of “donations,” the Clinton Foundation shielded the identity of the donors.

In the Washington Post article linked above, the use of donations for political influence is a prime concern:

The foundation, along with the Clintons’ paid speaking careers, have provided additional avenues for foreign governments and other interests to gain entrée to one of America’s most prominent political families.

The Clintons have turned the whole Democrat party into organized crime. Or is it the other way around?

How much of this undisclosed money came from ‘news’ outlets.

I guess this is more profitable than investing in cattle futures …

Yes, that was a once-only kind of deal. For one thing, it could only work if the person paying the bribe happened to be a stockbroker, or whatever one calls the equivalent in the futures market. How often does that happen? (We still don’t know what the bribe was for; what did the broker receive from Bill in return for the money he gave Hillary?) For another thing, even doing it once they got caught and couldn’t explain it away; imagine doing it more often.

“There’s nothing wrong with people cashing in.” Are we sure about this? If these were ‘revenue’ and not disclosed as the Clinton’s claim because they weren’t ‘donations’ were they filed/taxed appropriately?

A charitable foundation is, of course, tax exempt, so your question doesn’t begin.

“charities, for contributions made on or after January
1, 1994, must provide timely written disclosure statements to contributors who make payments described as “quid pro quo” contributions in excess of $75.”

“A “quid pro quo contribution” is defined as a payment made partly as acontribution and partly as payment for goods or services provided to the
contributor.”

IANAL but $500,000 for speaking fees sounds like a ‘quid pro quo contribution’ to me.

A loophole big enough to drive a future trade-pact through.

This is the TAR. It will stick to Bill and Hillary. It does not have to be proved in court.

Illary is showing her multiculturalist, egalitarian side by accepting donations from all types of eager “lot’s of money-(is-lot’s-of-free-speech)is-lot’s–of-leverage-listeners”or
“Villagers United”.

There’s a lot wrong with “cashing in”, if there is even an ounce of quid pro quo. And it is mostly quid pro quo, as I see it.

And for someone in office (or contending for office), such oversized fees are obvious “bribes”. Even without specific agreement, there will be an indebtedness that will exert influence (even if it were only subconsciously, which it is usually not).

My nephew, a doctor, told me of a study that showed even a small reward (like a meal) influences decisions. This was after some law/rule that took away some of the big prizes for doctors prescribing certain expensive drugs. But they were still accepting free stuff like meals, and maybe trips.

But at the Clinton level, (and most of the Democrat side, a lot of the R side), candidates get more money by maintaining their reputation for being good for the payback. Foreign states have the big bucks, for purchasing global influence, and Hillary delivers. As I see it, that is selling OUT America, not cashing IN on personal fame.

Chinagate indicates the Clintons already acted as traitors, taking China money and delivering military missile tech and access into our systems, with China guys walking out with hard drives and such, then disappearing when under investigation. And God knows what evidence Sandy Bergler hauled off before they stopped him.

Hillary and Obama seem to agree we should spread the wealth around, including nuke technology to our enemies.

To this end, Clinton appointed anti-nuclear activist Hazel O’Leary to head the Department of Energy. O’Leary set to work “leveling the playing field,” as she put it, by giving away our nuclear secrets. She declassified 11 million pages of data on U.S. nuclear weapons and loosened up security at weapons labs.

Federal investigators later concluded that China made off with the “crown jewels” of our nuclear weapons research under Clinton’s open-door policy – probably including design specifications for suitcase nukes.

Meanwhile, Clinton and his corporate cronies raked in millions.

This got swept under the rug while the MSM led the LIV’s through the hysteria about Monica and the blue dress.

What the heck could Hillary or Bill tell you in an hour that would be worth a $250,000 or more fee?

But at least it helps expose Democrats for the corrupt scum of the earth they all are (except those too dumb to notice the thievery going on around them).

Estragon: What the heck could Hillary or Bill tell you in an hour that would be worth a $250,000 or more fee?

The fees are not atypical for A-list speakers.

For well-known personalities fees are usually over $50,000. And the biggest names such as Bill Clinton, Richard Branson and most A-list celebrities are over $100,000.
http://speaking.com/frequently-asked-questions/

That’s because they’re draws. If you are raising money for a cause or event, paying for an A-list speaker can be well worth the cost. George Clooney charged $600k for an appearance at the “Power of Collaboration” leadership summit.