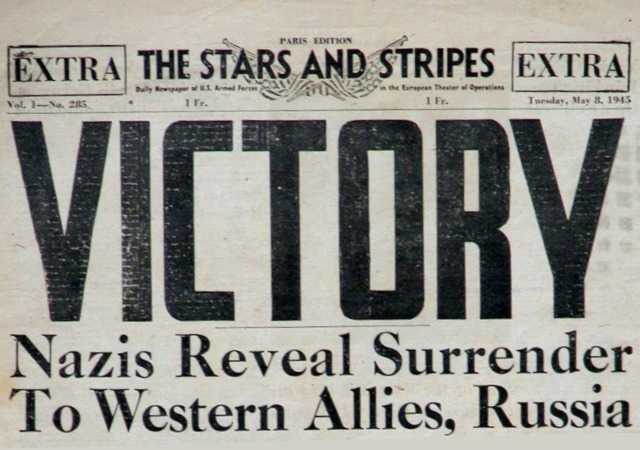 Today marks the 70th anniversary of VE Day (Victory in Europe Day), when the Nazi’s surrendered to allied forces and Russia, ending World War II’s European front. The battle for the Pacific would not be won until later that year, on August 14.

The world celebrated the end to the bitter, bloody fight against Nazi fascism:

What was it like to wake up and discover the “German War” as it was often called, had ended? The Telegraph has a fascinating timeline of the events from May 8, 1945, beginning with:

11.00
Vast crowds are already waiting outside Buckingham Palace, hoping to catch a glimpse of the King and Queen. They are cheering at every opportunity, and have just been in uproar again as a party arrived for an investiture.

One boy from Vauxhall, south London, Ronald McGill, is not at all happy about spending the day outside the Palace. He had been hoping to go fishing in Richmond Park with friends. “We had a terrible row and my friends went off,” he says. “I had to go up on the railway to Vauxhall, walk up to Buckingham Palace and stand there with the rest of them cheering and my heart was in Richmond Park fishing.”

10.55
Today’s papers are allowed to carry weather reports for the first time in almost six years. “Wind refreshing; warm and sunny at first but rain can be expected later,” says the Daily Mirror.

10.50
Good morning and welcome to The Daily Telegraph and Morning Post’s rolling carrier pigeon service on this momentous day. The banner headline on the front page of today’s newspaper is unequivocal: “Germany capitulates!”

“This is VE-Day,” the copy announces. “The war in Europe is over. After five years and eight months ‘complete and crushing victory’ has, in the words of the King, crowned Britain’s unrelenting struggle against Nazi Germany.”

The report goes on to explain that the Ministry of Information announced yesterday that today would be treated as a holiday, called “Victory-in-Europe Day”, after Germany surrendered unconditionally to Great Britain, the United States and Russia.

How the British celebrated:

I love that seventy years later, we take the opportunity to celebrate victory over tyranny and evil. Thankfully, our generation has been spared the horror, and the human expense both World Wars required. May we never take for granted that freedom is never free.

Talk about a time warp … can’t believe the NYT was so supportive back then.

It’s embarrassing to point this out, but it’s still true: the Soviet Union was in a full-tilt war effort in Europe, and their propaganda machine was in harmony with America’s war effort.

So, no real opposition from the Times and like outlets. They had their marching orders.

Read that again. The NAVY lost almost the same number in one invasion effort on ONE island as we lost in Iraq.

It’s a great honor to get to meet those warriors that are still with us. God bless them!

The same amount of men were killed on Omaha Beach as were killed in the 6 odd years we were in Iraq. That is just the casualties in one little battle in the whole war on the Europe Theater of Operations. The Battle of the Bulge even more costly in American lives. That was just the dead. There were a lot more wounded and captured. Yet, the left screamed and gnashed their teeth at everyone that was killed in Iraq.

It’s a shame that VE Day is no big deal here.

For military members, no doubt, but it’s not a major national holiday, or even something that most people know about. Compare it to May 5.

My father was liberated on this day in 1945.

Where was our Commander in Chief today?

Honestly, I’d rather not see his face popping up at any event that celebrates courage and moral clarity.