Expected to announce run for president on Monday 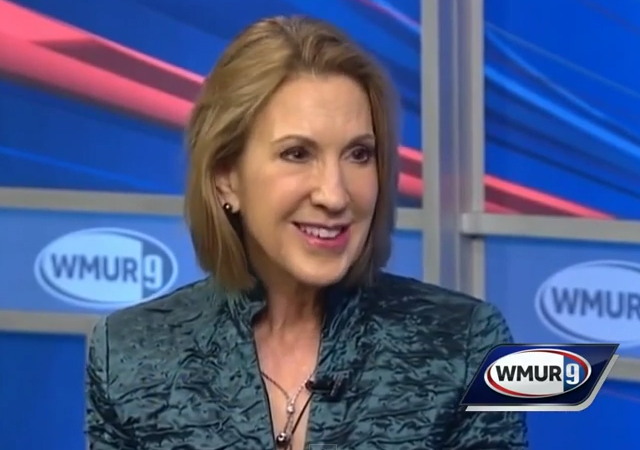 Carly Fiorina visited New Hampshire this week and according to WMUR News, she received a warm reception:

The announcement could come as soon as Monday, and the former Hewlett-Packard CEO has spent a lot of time in the Granite State. Despite growing criticism from Democrats about her record as an executive, she appears to be gaining some traction.

After almost a week of drawing increasingly large crowds in New Hampshire, Fiorina appears poised to make her candidacy official, though she won’t confirm it yet.

“New Hampshire has helped a lot because I have gotten a huge amount of encouragement,” Fiorina said.

Although she has never held elected office, Fiorina has been set up as a counterpoint to another female presidential candidate, Democrat Hillary Clinton.

Fiorina will surely face more questions about her tenure at Hewlett-Packard but that’s not a bad thing.

It would be hard to find anyone not connected to her campaign who likes her odds of actually reaching the Oval Office. But there’s no mistaking her seriousness, and the campaign itself has been its own kind of success. She’s impressed audiences at the Conservative Political Action Conference, the Iowa Freedom Summit, and Iowa Faith & Freedom Coalition with her unapologetic conservatism and gone after Hillary Clinton on everything from conflicts of interest to wearing her sunglasses inside that Chipotle. She’s also shown an appealing gameness on the campaign trail, a looseness and willingness to play along. At HP, a common critique was that her best event was marketing herself. In running for president, that’s a core skill.

“She’s gotten better,” says conservative writer Ed Morrissey. “I never count anybody out who’s got that kind of talent on the stump. The idea that the first office you hold shouldn’t be the presidency is going to kick in at some point, but she’s going to impress people all the way through.”

Kuhl. The more the merrier.

I well come her contributions to the race, in particular she would make a great foil to used against Hillary. Cabinet level position, yes. VP maybe.

However, she should not be the nominee for president , Even if there are legitimate explanations for her record at HP, explaining them will suck up all the oxygen.

On top of that, because of her lack of public office, all her nomineees for the SCOTUS could wind up to be David Sutter’s or Harriet Meyers. Not to mention her other policies.

I should say that there are no legitimate explanations. She was was a total disaster there.

She’s not a bad candidate.

I personally would prefer that absurd candidates like Hill or TheWon be restricted to the Democrats. I’d like to be able to take the Republicans a little more seriously. But they’re not making it easy …

Initially I thought she would make an abysmal President.

However her track record of failing at everything she does should be of concern. Before voting for her as President I would want to see her accomplish something in office. Mayor perhaps, or Governor of California. Maybe appoint her Postmaster General and see if she can fix the mess. If so then she does deserve a shot.

Carla, Perry, and Rubio, are all good people and ones that I hope make to that last set of 5 or so headed into 2016, which should also include Walker. I’m fairly certain Scott Walker will be there too, as for now, he’s my strong preference.

Yet, the 2016 GOP nominee should be the one who can best articulate his position on the many issues we’re facing and who can best show us how our nominee stacks up against Democrat’s choice.

We all saw, in 2012, how easily an apparent strong candidate can stumble out of contention; my preference might be hedged for now.

I still believe Fiorina and Graham are running for VP. Rubio may be, too, since he’s abandoning his Senate seat.

She would be an ideal attack dog – the recent tradition for the Veep nominees – against Hillary or Warren, dulling the edge of their “war on women” nonsense.

On the HP side of it, I would only note that those who so virulently despise her over her HP tenure that they have pursued her relentlessly ever since, and still seem burning for vengeance, are almost all friends or allies of the founding families and the same management team that brought the company to the point they needed an outside “white knight” to rescue them. She stepped on some very sensitive toes.

Nonsense. Whether she’s despicable is irrelevant; maybe she is, maybe she isn’t. Her problem is demonstrated failure as an executive.

Those who have spent their working careers in the science/engineering/technology industries know—not guess, know—that she was a catastrophic disaster at HP. And we don’t have to be relatives of Bill Hewlett and Dave Packard to know it.

And, oddly enough, some of us don’t think that repeating HP’s blunder at the national level would be a terribly brilliant idea.

She stepped on some very sensitive toes. Including the majority of engineers who went around chanting “ding dong the witch is dead” the day she was fired — er that is — quit.

Including the Board of Directors who were about to fire her when she quit. Or the stock holders of HP.

Last time LI spoke about Carly, I asked people if they had heard of her in 2000, because I had. From sites like slashdot and theregister, and everything I have seen indicates that she was an unmitigated disaster as an executive.

So this I will ask another more basic question of anyone supporting her. Can you tell us one thing, just one thing, that she was an objective success at. Other then promoting herself that is.