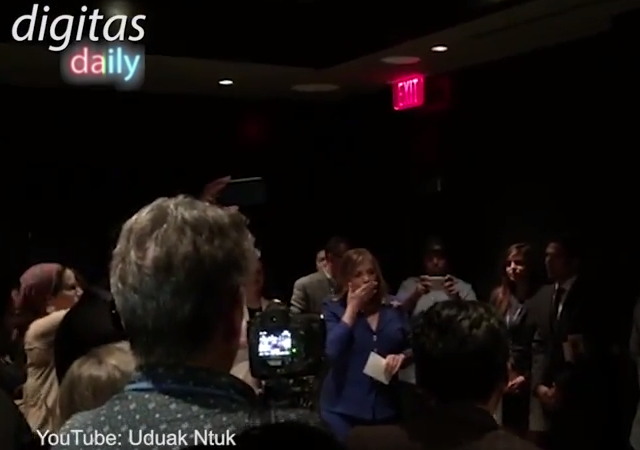 California Democrat Loretta Sanchez has come under fire for using a stereotypical and cartoonish gesture to describe Native Americans.

From the Los Angeles Daily News:

U.S. Senate candidate Loretta Sanchez has apologized after a videotape surfaced showing her making a whooping cry in reference to Native Americans during an apparent joke.

Speaking to delegates at a state Democratic convention Sunday, the 10-term congresswoman said she said something offensive “and for that I sincerely apologize.”

The video, which was shared on social media, shows Sanchez tapping her hand over her open mouth and making a whooping sound while speaking to a group of delegates Saturday.

Sanchez said American Indians have “a great presence in our country and many of them are supporting our election.”

Harris, whose mother was an immigrant from India, said, “There is no place for that in our public discourse.”

This isn’t the first time Sanchez has stirred controversy with race related comments.

Back in 2010, she made some questionable remarks about her Vietnamese opponent.

Professor Jacobson wrote about the incident:

Can you imagine if Van Tran had said something along the lines of “let’s take the seat from the Hispanics”? There would have been a mainstream media firestorm.

During the senate race between Elizabeth Warren and Scott Brown, Democrats decried similar tactics by some Brown supporters as racism.

Will they condemn Sanchez in the same way? Enquiring minds want to know:

Has anyone asked Elizabeth Warren what she thought about Loretta Sanchez’s gesture?

My God … this is enough to send Lizzy Warren on the warpath!

Lizzie Borden Warren – with her hacket……

To be fair, her IQ is about 70. Jon and Ken are constantly playing her clips- she is among the dumbest people in existence currently. Rather than being racist or malicious- she is legitimately close to disabled mentally.

So. She fits right in with the rest of the Kuhlhifornia delegation…

When she was first “elected” to Congress, her supporters were telling immigrants (legal and illegal) that they didn’t need to be citizens to vote. Naturally, she could claim with a straight face that it was only a “get out the vote” group, that had nothing to do with her campaign. Sure. We will never know exactly how many non-citizens actually voted, because the investigation was halted when they basically ran out of time before the final tally had to be reported, conveniently for Sanchez as her margin of “victory” over “B-1 Bob” Dornan was shrinking dramatically after hundreds of votes had been tossed out.

The shocked outrage, real or for show?

No. Not a chance. You think they’ll let a little thing like mocking a minority derail their obvious moral superiority and good works?

Political Correctness is for the small, little people who are governed like sheep. Democrat politicians get a pass because, well duh, they believe all the right things and they’re the right kind of people.

Like any act of giving, it’s the thought that counts.

Sorry, PC-Koolaid Kids. It’s AMERICAN INDIANS. I, lowly WASP boy of English, Scottish, Irish persuasion going back in America to the early 16th century am a NATIVE AMERICAN as well. Gaaawd, how I hate the mutilation of honest English terms.

The translation doesn’t do justice to her “us” vs. “them” mentality. She says, “…que ya NOSOTROS hemos hecho tanto para nuestra comunidad…” In Spanish that “nosotros” wouldn’t normally be used. She just highlighting it is the Latinos and not any other group which has been controlling the seat. And the rest of that phrase wasn’t even translated, which is “we’ve already done so much for our (Latino) community (with that seat).” And how ironic she complains about someone being anti-Hispanic when she herself sounds none too friendly toward the Vietnamese.