“Cash for Grass” programs spring up across state. 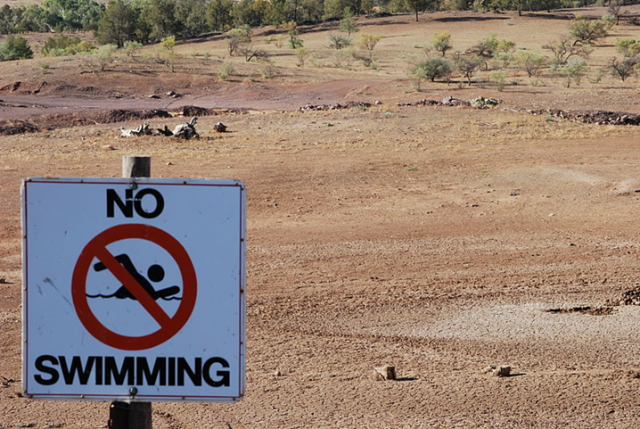 The floods flowing through Texas have created an unusual emergency situation: An inundation of snakes!

Texans whose cities have been deluged by torrential flood waters have another problem to contend with – a tide of more than one thousand snakes seeking shelter in their homes.

Panicked residents of the Lone Star State, as well as those in Oklahoma, which has also been swamped by the floods, have been finding the reptiles slithering into their houses in a bid to escape the rising waters.

Species including the rat snake – which can grow up to six feet long – have been found inside homes, nestled in the wheels of cars and hiding on patios.

In contrast, in response to the continuing “drought” (which is actually part of the regular climate cycle for this region), our politicians are slamming communities with new rules and programs.

For example, Sacramento County is offering “Cash for Grass” in addition to imposing strict times rules for watering grass. The following is a sample of the rebate program:

The “free” money program, which is springing up in some form around the rest of the state, is proving popular.

The number of weekly lawn-removal requests more than tripled to about 3,000 after Brown’s order, an agency report said. It said the agency has received applications that would total $330 million, though not all of those are likely to be approved.

Under the program, the agency pays $2 per square foot to replace grass. A maximum rebate of $6,000 is allowed per residence.

Now, Cupertino is canceling its July 4th show in response to the drought:

“People are very disappointed,” said city spokesman Rick Kitson. “Who doesn’t love fireworks? But overall, I think they get it.”

And though no agency formally tracks fireworks cancellations related to drought, Cupertino – home to Apple Inc. headquarters – could be the first city in California to squash such a pyrotechnics display as the state enters its fourth year of drought.

However, fireworks have been a target for eco-activists for years. Our local ones in La Jolla have been the center of lawsuits for years, related to their supposed “environmental impact.” The last one was settled when the organizers agreed to pay for a scientific study of those effects.

And while Californians have responded to previous dry times with robust conservation measures, officials are preparing citizens for rate hikes:

Ironically, the more people conserve, the lower the water agency revenue, which means eventually rates will have to go up.

“I think most customers think, ‘If I’m using less, my rates shouldn’t go up,'” said [Gary Breaux, chief financial officer of the Metropolitan Water District]. “But most of the cost—80 percent of the costs—are fixed, so whenever you need to turn on the tap, the water is there.”

In addition, Breaux said he believes investments will be needed at some point in building more water storage and better methods of recycling water. That will cost a lot of money—more than cash-for-lawn rebates cost.

Frankly, I might mind the rate hikes less if they went for actual infrastructure and not for more bureaucrats or to fight frivilous lawsuit brought by eco-activists opposing those infrastructures.

We chatted about both Texas and California, as well as national security matters, in Canto Talk last night. Check it out!

Kudo’s on your link to Anthony Watt’s blog for the climate cycle reference http://wattsupwiththat.com/2014/01/18/californias-drought-situation-in-p

These Climate Bloggers have been doing yoeman’s work in the field and its nice to see you acknowledging that work.

If you haven’t been following him, Steven Goddard’s “Real Science’ blog is a fearless fighter as well:

When Flood Floyd happened (eastern NC, 1999), the high water mark surrounded Casa Hawkins, but got no closer than 30 feet or so (because I built on a small ridge next to the Tar River. But the snake thing is real – I was dodging copperheads, cottonmouths, black snakes, ever’ kind o’ snake they is for several days. They had no where to go. And it wasn’t just snakes. Anything that lived on or in the ground was driven ahead of the flood waters. I’m a nature boy science geek, so it was fearsome and awesome all at the same time.

Always awkward when the family moves in, huh?

lol, truer than you might know. What we have is the full spectrum: I have a nephew who is reportedly among the most sought after NASCAR mechanic/technicians, which is cool though I’m not a racing fan, but I also have an uncle in a Canadian prison for three bank robberies.

I have an in-law nephew who enlisted in the USMC ten years ago who is now part of some sort of special forces team, family not allowed details/need to know, so he’s probably doing something awesome, but I have a son who, like me and a long paternal line behind us, has done time over an unnatural affinity for alcohol and rowdy behaviors without consideration for consequences (though we’re both fine now).

I have a niece, Michigan State Ph.D candidate, working as a field agro-biologist in Central America (alas, for some liberal relief org), but two nephews, sons of me mither’s own sister (Irish immigrants) who died within a year of one another, essentially from cocaine addiction, back in the 1980s.

I could go on like that all day, like a pendulum. Of course, this might describe most familes, far as I know. Our geographical center remains Michigan where we are required by law to notify the Michigan State Police when we hold family reunions. Tough to argue with that.

Heh! Plus a public safety bond!

Just a good average Scots/Irish broth of a family…!!!

Where does all this flush cash come from that CA has to pay people?

I’m pretty sure they are dead broke and one of the most indebted states of the Union.

So when will the leftists in California ban the sale of dishwashers? Is it around the corner?

Or band the use of those Hollywood swimming pools?

CA needs to outlaw or at least regulate the process of evaporation.

Don’t say that too loudly, or they will try it.

By the way, Texas does get floods.

In my experience, Bexar county gets a 100-year flood every twenty years or so, followed by another 100-year flood within 1-3 years. That is why my daddy told me to NEVER buy a house within the 100-year flood plane, because that location is inside the river.

I play guitar and I have a practice song set, chosen because each exercises a different technique, skill, etc. One of those is the seminal blues song Texas Flood, a standard in the blues since the 50s.

Can someone explain to me just what a drought has to do with Fourth of July fireworks at the local fun park which also discourages individuals from using fireworks to get their own jollies (preventing accidents and fires which requires water to fight)? It is safer, more fun, and uses more water how???