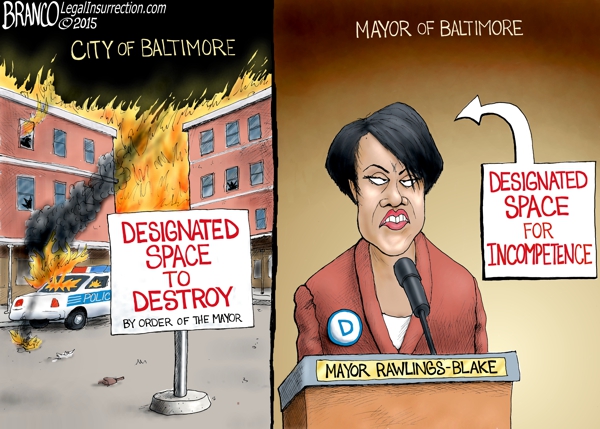 I wonder if the Mayor’s “designated space to destroy” comment is enough to sustain a lawsuit against the city for damages.

Didn’t SCOTUS rule a while back that police have no duty to provide protection? Perhaps that ruling can be circumvented by arguing that Mayor Stephie encouraged the riot.

I love the almost dead eyes you gave the Mayor. Without pupils would have made an even emptier look she displayed. To me she sounded like this.. “I am a ‘bot’ and only make ‘bot’ statements, but you must follow the circle of ‘bot’ thinking.. or we will destroy you one way or another.”

She’s better than her predecessor:

Sheila Ann Dixon (born December 27, 1953) served as the forty-eighth mayor of Baltimore, Maryland. When the former mayor, Martin O’Malley, was sworn in as governor on January 17, 2007, Dixon, the president of the Baltimore City Council, served out the remaining year of his term. In November 2007, she was elected mayor. She was the first African-American female to serve as president of the City council, Baltimore’s first female mayor, and Baltimore’s third black mayor.

On January 9, 2009, Dixon was indicted on twelve felony and misdemeanor counts, including perjury, theft, and misconduct. The charges stem partly from incidents in which she allegedly misappropriated gift cards intended for the poor.[1] On December 1, 2009, the jury returned a “guilty” verdict on one misdemeanor count of fraudulent misappropriation and Dixon received probation provided she resign as mayor as part of a plea agreement, effective February 4, 2010.

She was succeeded by the Baltimore City Council president, Stephanie Rawlings-Blake, on February 4, 2010.

With her father’s help, Ms. Rawlings-Blake became, at 25, the youngest City Council member in Baltimore history.

Eventually, she rose to become the council president. In 2010, when her predecessor, Sheila Dixon, was forced to resign amid scandal, she stepped in as mayor. She won election in her own right the next year, and is up for re-election in 2016.

Ms. Dixon — hugely popular among black residents — is dropping hints about running against her.

The New York Times reports today that Baltimore is the worst county out of the 100 most populous counties to bring up children. (although that’s not the headline)

Among the nation’s 100 largest counties, the one where children face the worst odds of escaping poverty is the city of Baltimore, the study found.

The city is especially harsh for boys: Low-income boys who grew up there in recent decades make roughly 25 percent less as adults than similar low-income boys who were born in the city and moved as small children to an average place.

The study that supposedly showed it wasn’t worth it to help people move out of certain places is being overturned.

They say one reason is that the older stidy only followed children for ten years, and the biggest change is for children who moved out before they were teenagers. I think another reaosn might be that the current study involves eople who made the decision on their own to move. They are self selected. And the difference also is probably schools, and civil society, and of course, the crime rate.

Who would hire anybody covered with tats, with limited English skills and limited education who wears baggy pants and exposed underwear? If these kids would smarten up, they’d be in a better position to get jobs.

… and when the courts don’t hang these policemen.

I expect the cops to monitor Tweeter and redirect rioters to the homes of Baltimore officials who thought ‘stone throwing’ was OK.

Use Twitter as an offensive weapon is a great idea. These idiots are so dumb they believe everything they see on the smart phone screen.

What I expect is that LEOs in Baltimoron are going to chose to be VERY, VERY passive and careful.

I can’t help but look upon Rawlings-Blake in amazement because she has been targeted by the DNC as one of their future stars. What a train wreck.

Obama would have never made ‘Rat stardom if he had held a position of responsibility before the presidency.

She did and said everything that Obama wanted her to, except for the Freudian slip about space. Obama has a problem giving “Stand-down” orders and the MSM has a problem about not caring about them.

I think they should have designated her house as the area to destroy.

This is the best picture of the Mayor that I have seen to date. Its so lifelike.

I noticed that the welfare office was left unscathed!