Positioning himself as “spokesman” of the progressive movement 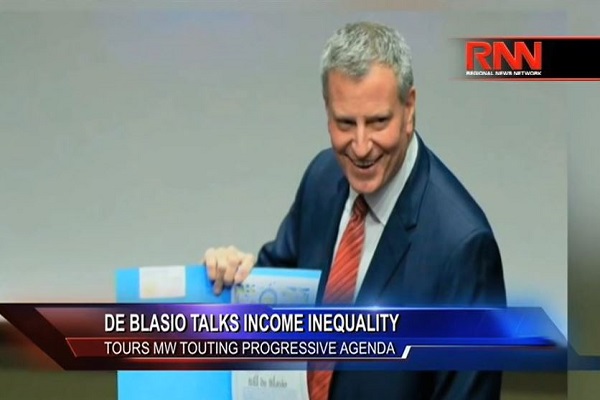 Last year marked the twenty-year anniversary of Newt Gingrich’s “Contract with America” that is often credited with helping usher in the 1994 Republican Revolution.  The Gingrich “Contract with America” was a simple, straightforward list of major reforms Republicans promised to introduce and bring up for a vote should they take control of Congress:

Within the first 100 days, the first Republican majority in both Houses of Congress in 40 years, passed bills tackling almost every item (the notable exception: term limits for Congress).

Fast forward to now when New York City mayor and self-described advocate of “democratic socialism” Bill deBlasio is preparing to introduce new, progressive “Contract with America.”  Hoping to recreate the success of the original, Gingrich “Contract” and help Democrats make gains in Congress, deBlasio has reportedly come up with a 13-point “Contract” that promises:

With “everyone from Susan Sarandon to Van Jones helping draft and push de Blasio’s new ‘Contract with America’,” de Blasio is clearly trying to establish himself as progressive top dog.

Not everyone is thrilled with de Blasio positioning himself as the leader of the progressive wing of the Democrat party:

So the Democrats expect to run on a policy that will cripple exports, drive up the cost of imports, put illegal immigrants in front of the line that legal immigrants are waiting in, ramp up the cost of employees to the point where automation will take over a much larger swath of low-income labor, force people into unions that they don’t want to be in, drive more businesses out of the US, and screw with any businesses that are left by shackling them with higher costs and lower profits.

Ah, but remember! When electrical power becomes scarce/unreliable/a luxury only the elite can afford, automation…and our standard of living…goes out the window.

The Collective will show US!

I think DeBlasio id running for President, yes I do.

Sorry had to correct it for him.

de blasio’s “Contract ON America” is worth its weight in rolls of toilet paper. Yet, I see no mention of “free TP for the masses”. Shame.

And, I thought they outlawed public urination. NYC voted for de Blasio.

Truly perspiration-al: The only incentive apparent in this “Contract On America” is the incentive to vote for more of de “gimme the goods” Blasio.

All the Contract with America promised was to bring the items to a VOTE with the first 100 days, and they did that with 9 of 10. But it is a myth it had much to do with the GOP takeover.

Look at the polls. The Contract was introduced to much fanfare, even in the media, but failed to move the needle at all. So what did?

The primary factor in the 1994 Republican wave was the House Banking scandal, where over 100 Representatives, almost all of them Democrats, were exposed for floating bad checks with the House Bank, effectively giving themselves interest-free loans. It was against the House rules and the Bank’s rules, but under over 40 years of Democratic domination, corruption had set in.

Even the powerful Chairman Dan Rostenkowski was ousted from his very safe seat for violations. Nearly all House incumbents defeated (or whose seats flipped if they didn’t seek reelection) were implicated in the scandal. Only members of the Congressional Black Caucus were not punished by their districts for violations.

The scandal also helped flip the Senate. Republicans’ biggest win was Frist over Sasser, but only one other incumbent lost. The key was holding GOP open seats and sweeping the six open Democratic seats.

The Contract and the lingering anger at Clinton over the HillaryCare fiasco helped on the margins, but the main reason for the takeover was the scandal.

I say give DeBlasio lots of press.

Until “progressives” reject abortion as a wicked solution to a “wicked problem”, there really is no cause to negotiate on compromises of individual dignity. Their rejection of intrinsic value taints every other policy with a color of ulterior motives.

The shorter version: turn around, and bend over America….you’re about to get screwed.

Just as Obama has shown himself to be the greatest gun salesman in history, Britain has just showed us that leftist oafs like DeBlasio and Crazy Nancy Pelosi are great salesmen for conservatism.

All of these proposals are such ill-conceived, transparently pandering and ill-conceived conceits that reveal the Left’s utter fiscal and economic illiteracy, but, the “Buffett Rule” irks me the most out all of them. Recall Obozo stating that he wanted “millionaries and billionaires” to pay their “fair share.” By the way, the Buffett Rule website is still up on the White House website; it makes for amusing reading.

First, note the obvious inequity of lumping millionaires in the same group with billionaires. Obozo really wants to compare a suburban couple with two or three kids, living in a house worth $500,000 or $600,000, whose combined income is, say, $150 to $200,000 a year, with a billionaire? One billion is one thousand millions, but, you wouldn’t know that from the way the Left lumps them all together in one group, to be rhetorically smacked around like a pinata for their allegedly excessive wealth.

Next, note the way that the Left won’t even acknowledge why capital assets are given preferential tax treatment — to encourage investment and risk-taking that creates business creation, business expansion, and, those things (hard to find under Obozo) called PERMANENT JOBS! The obvious solution to the ridiculous and fallacious painting of Buffett’s highly-compensated secretary as some sort of “victim” because she pays a higher tax rate on ordinary income than Buffett does on his capital gains is the one that the Left won’t ever contemplate — simply lower the ordinary income tax rate so that it is comparable to capital gains rates.

Oh, and with respect to that favorite demagoguery talking point of the Left, CEO pay, which is appropriately a shareholder issue, why don’t we see the Left attacking the Hollywood actors, rappers and pro athletes that Obozo and loves to rub shoulders with, for their outsized compensation? Surely, a skilled and highly effective CEO of a multinational corporation is helping to create more wealth, over a far more consequential scale, than, say, Leonard di Caprio or LeBron James? But, I don’t hear the Left complaining about their compensation for performing decidedly more superficial work.

And, and, final thought on the utter stupidity of the “Buffett Rule,” a question for all those neo-communist-Democrats to ponder — don’t the Left’s beloved teachers, cops, firefighters, municipal employees, plus grandmothers and other members of the proletariat, own stock, either through state pension plans, or, in individual 401k and/or IRA’s and private investment accounts? Wouldn’t implementation of the moronic “Buffett Rule” hurt these folks a heck of a lot more than it would Buffett and his ilk?

Progressives like protectionism except when it comes to immigration. Just what we need: Hirer prices for goods and lower wages.