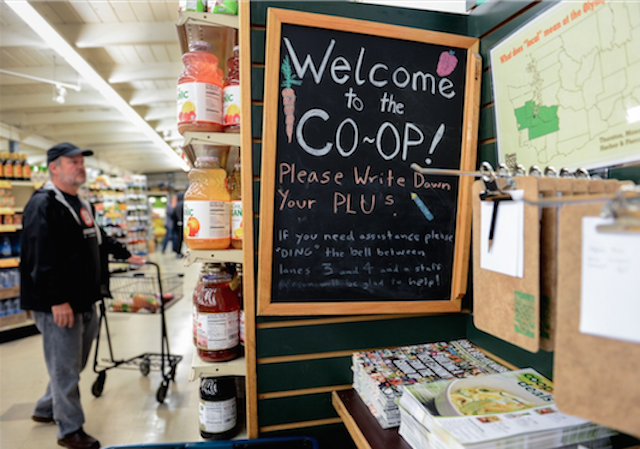 We’ve provided extensive coverage of the BDS movement’s battle against the inclusion of Israeli-made products at food cooperatives. Most recently (and closest to the hearts of the Legal Insurrection team,) the members of the Ithaca-based GreenStar Food Co Op won a very hard-fought battle against BDS activists fighting for a referendum that called for the boycott of Israeli products. A Co Op in Olympia, Washington, however, has found itself on the opposite end of the spectrum.

Members of the Olympia Food Cooperative sued the Co Op’s board after board members decided to protest Israel’s alleged human rights violations via a Co Op-wide boycott of Israeli-made products. Plaintiffs claimed that the boycott violated the Co Op’s own boycott policy; the board, however, invoked Washington’s anti-SLAPP statute, claiming that the plaintiffs had filed a frivolous lawsuit as a way of suppressing public discussion. The plaintiff group was SLAPPed (I had to) with over $200,000 in fines and penalties, but appealed, claiming the SLAPP statute itself was unconstitutional.

The case went all the way to the Washington Supreme Court, which held that Washington’s unique SLAPP language “creates a truncated adjudication of the merits of a plaintiff’s claim, including nonfrivolous factual issues, without a trial. Such a procedure invades the jury’s essential role of deciding debatable questions of fact.” This, they said, violates the Washington State Constitution.

This is more of a political victory than a legal victory (although we’ll take what we can get,) mostly because Washington’s anti-SLAPP statute is so unusual. As PopeHat explains:

I’ve lawsplained anti-SLAPP statutes before. In brief, an anti-SLAPP statute is a tool to address frivolous and vexatious lawsuits aimed at protected speech. Generally, they work like this: the defendant files a motion showing that it is being sued because of speech covered by the statute. If defendant does so, then the burden shifts to the plaintiff to show that it has evidence supporting their claims. If the plaintiff succeeds, the suit survives; if the plaintiff fails, the court dismisses the case and (usually) awards defendant its attorney fees.
…
Most state statutes say the plaintiff has to show a “probability” of prevailing, or language to that effect. Almost universally, state courts have interpreted that to require the plaintiff only to produce sufficient evidence: that is, evidence that would be legally sufficient to support plaintiff’s claim if the jury accepted it as true. In those states, the judge considering an anti-SLAPP motion doesn’t weigh evidence — he or she doesn’t consider whose evidence is more persuasive. Instead, the judge treats it rather like a motion for summary judgment: has the plaintiff offered evidence that if believed satisfies all of the elements of the cause of action?

Washington’s anti-SLAPP statute is a little different. If the defendant carries its initial burden of showing that the lawsuit targets speech covered by the statute, it requires the plaintiff “to establish by clear and convincing evidence a probability of prevailing on the claim.” That plain language seems to require the plaintiff to show more than enough evidence, and requires the judge to weigh the evidence.

Legally, this is great for anti-BDS folks, but politically, it’s huge. The BDS movement is loud and proud, but it hasn’t been very successful when it comes to convincing co ops to boycott Israeli products. The Olympia Co op was their one victory, and now that victory is spiraling out of their hands. BDS activists are used to getting a long way on rhetoric alone; this case will cause serious repercussions when it comes to public image, and narrative momentum.

The battle isn’t over. This particular legal victory means that the plaintiffs will be allowed to continue with their lawsuit against the Co Op board. Expect the BDS activists to fight back. We’ll keep you posted on any new developments in this case as it moves through the courts.

You can read the decision from the Washington Supreme Court here.

UPDATE (WAJ): Stand With Us released a statement which reads, in part:

StandWithUs is thrilled to share the news that, in a major setback to the anti-Israel boycott, divestment, sanctions (BDS) campaign, this morning the Washington State Supreme Court held, by a vote of 9-0 that a lawsuit can proceed against Olympia Food Co-op board members, challenging their 2011 decision to boycott Israeli products.

StandWithUs helped the plaintiffs, five long-term dedicated members of the Olympia Food Co-op, find counsel to take legal action after they’d exhausted all other opportunities to get the Olympia Food Co-op board to follow its own boycott policy and bylaws and to reconsider the boycott decision.

When the trial court ruled against the plaintiffs, it assessed $232,000 in fees and penalties, an amount that would have been an overwhelming burden to the plaintiffs.

To appeal the case, the plaintiffs would have had to post a bond for more than that amount – over $400,000 – exremely difficult for the five middle class Olympia plaintiffs.

StandWithUs saw the situation the plaintiffs were in – long-time co-op members, supporters of Israel – who now faced devastating financial penalties simply because they stood up for fair treatment of Israel and demanded that their co-op board follow its own rules and bylaws.

StandWithUs stepped in and borrowed the money to post the bond for the full amount so that the plaintiffs could challenge the lower court decisions.

Now that the Washington State Supreme Court has completely rejected the Olympia Food Co-op board members’ argument and sent the case back to the trial court, StandWithUs is looking forward to the plaintiffs having their day in court – a real trial on the issues they first presented: The Olympia Food Co-op board’s violation of the co-op’s own rules and boycott policy when, without any public notice or debate, the co-op board voted to boycott Israeli products.

BDS activitists got the …….. SLAPPED out of them?

As an attorney practicing civil law in Olympia, utilized this statute (and who has occasionally shopped at this coop), I was pretty surprised at this unanimous decision this morning.

Hope your vaccinations are up to date.

Hooray for the plaintiffs! I hope they proceed with their lawsuit and win a big fat judgment against Olympia Food Co-Op! Anti-Israel BDSers beware! Am Israel Chai!