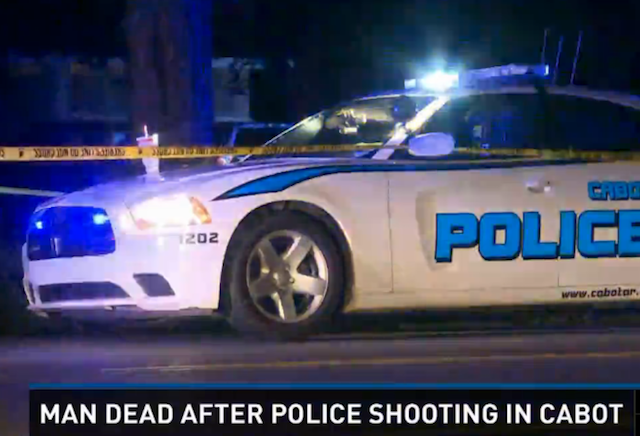 I’ve long assumed that just about anything written by a journalist has only the most tenuous relationship to reality (see Michael Crichton’s “Gell-Mann Amnesia Effect”).

Few news agencies are as skilled at the AP, however, at crafting headlines–often the only part of a story a casual reader notes–that communicate a narrative that’s precisely the opposite of the underlying facts.

As one example, here’s a prevaricating AP headline from October 22, 2014:

In that case the actual facts turned out to be that the man shot was engaged in a terrorist attack on a bus stop, and had already managed to kill a 3-year-old before being engaged and stopped by Israeli police.  Replace the word”man” with “terrorist” and the headline would have accurately narrated the events.  Instead, the headline falsely implies an act of unjustified violence by Israeli authorities.  (In that case the AP withdrew the headline an hour in the face of considerable outrage.)

Here’s another favorite example, this one from 2007 in an AP piece covering the Iraq war (h/t Hotair.com):

Wow, how awful–we send our troops to go fight for the Iraqi people, and our military ends up clashing with the Iraqi troops?  Uh, no. The actual story discloses that US troops and Iraqi troops, far from clashing with each other, were fighting together against insurgents.

Technically, that’s true as far as it goes. That’s what makes the AP headline a prevarication rather than an outright lie.  They simply chose to craft the headline to reflect only the portion of the narrative they wished to advance.

What they left out, of course, was why the police shot him.

A: Because he had begun shooting at them.

Somehow, this arrested suspect managed to get his hands in front of him and access a compact handgun. When the police came back to the patrol car he opened fire on them, prompting them to (perfectly appropriately) return defensive fire.

The suspect is reported to now be in stable condition (meaning morgue temperature).

How difficult would it have been for the AP to craft a headline that accurately reflected those facts?

How about: “Official: Police successfully defend against armed suspect”?

So, not all that difficult.

Of course my proposed headline would merely have communicated the essential facts of the story, and would not have advanced the Social Justice Warrior rage-narrative du jour.

And that would appear to be the AP’s actual day job.

If you’re prepared to use force to make yourself hard to kill, make sure you know the law so that you’re hard to convict.

As far as I know standard press practise is for the headline to be written, not by the reporter who wrote the stories, but by a subeditor, who doesn’t always take the time to read the story thoroughly first. A subbie will often skim the story until he thinks he’s understood the gist, and then write a headline that reflects his understanding; every so often this end up with absurd results like these.

Only partially true. As a former editor, the “subbie” is actually at a higher level, not subordinate, and is working under the publisher’s very stringent rules as to contents, context, topics and points-of-view to be taken by the publications. She/he has to toe that line or find another job.
AP’s publisher’s goal seems to be to keep things stirred up and ingratiate themselves among the lo-fo’s. Ethics and journalistic responsibility have zippo place in that equation.

This crap isn’t a mistake, they do it on purpose. They only care about the progressive fascist cause and are abusing their duty to inform their viewers. They are just like Goebbels but working for a different cause.

Much the same happens with book covers. The artist has, if you’re lucky, skimmed the book first, and got a vague impression of what it’s about. Sometimes not even that.

It’s one of the great, long-running coincidences that these impressions always reflect badly on the right side of the political aisle and the institutions it supports.

In the parlance of ABC, honest mistake.

It happens much to frequently to be a coincidence. It is the simple fact that most people in what now passes for main stream journalism are rabid liberals. Unless you would like to say that their views don’t affect their writing?

“It was not clear if he was carrying a gun when he was cuffed, and the corrections official said officers had not found a gun on him. The Arkansas State Police is investigating the shooting.”

“McIntosh was set to finish parole on July 2 and had caused little trouble for law enforcement while in the corrections system, Tyler said. He was employed and had no disciplinary action in prison or since his parole in September 2014.”

It sounds like there are more questions, than answers, here.

One of the officer screwed up or another criminal left the gun in the back of the squad car. Do you expect that the officer should have just let the bad guy kill them?

This is why the work of bloggers such as yourself is so important, because it counters the false narratives.

11 days and he is home free. What the heck happened?

He got busted with drugs or at least that is what it sounds like and realized the was going back to jail for a very long time. This sounds more like suicide by cop than anything else to me.

Think about it, he had the drop on the cops, he could have easily killed one of them instead he engaged them from a distance. All he had to do was wait for one to open the door. Heck the Dept. of Corrections folks probably weren’t even wearing body armor (Though I don’t know this to be true.)

I love it — I’ve always wanted a good name for that. In High School, I read the Science Times every single week. Then I went off to college, and the paper got worse every year. By the time I started grad school, I couldn’t bear to read it.

Yeah, NYT Science Times used to be actual science. But it went over to pure propaganda decades ago.

Progressive fascism, baby. You WILL be assimilated. 🙂

I LOVED “Popular Science”…until it went green goo on me a few decades back.

Everything that is not assertively Conservative will be assimilated.

They are Dyslexic of Gorb, your ass will be laminated!

AP: Obscured and profit-spinning truth is consistent with relativism’s penchant for half-truth’s ‘open-mindedness’ being tangentially faithful to scientism’s ‘inerrancy ‘and politically correct as factually half-compensational correct but in balance fully short of Absolute Truth. Or, basically a synthesis of Truth and subscribed-to and hoped-for projected untruth.

I gave up on AP decades ago, after I called the local (San Antonio) office to point out a technical error in one of their stories. The response was – I kid you not – “most people wouldn’t know the difference anyway.”

On that day, Associated Press forever lost all credibility as far as I am concerned.

Tax-Payers are paying attention & 2014 was a warm up for what’s coming for the liberals.

Form your fingers to Gods ear.