Did the TEA Party fade away prematurely? 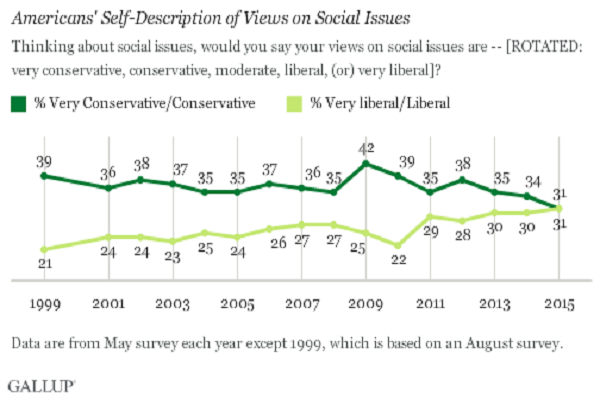 A couple of interesting polls came out this week that raise some equally interesting questions about conservatism, American values, and American culture and society.  One Gallup poll states that Americans greatly overestimate the percentage of Americans who are lesbian, gay, bisexual, or transgender.

The American public estimates on average that 23% of Americans are gay or lesbian, little changed from Americans’ 25% estimate in 2011, and only slightly higher than separate 2002 estimates of the gay and lesbian population. These estimates are many times higher than the 3.8% of the adult population who identified themselves as lesbian, gay, bisexual or transgender in Gallup Daily tracking in the first four months of this year.

The stability of these estimates over time contrasts with the major shifts in Americans’ attitudes about the morality and legality of gay and lesbian relations in the past two decades. Whereas 38% of Americans said gay and lesbian relations were morally acceptable in 2002, that number has risen to 63% today. And while 35% of Americans favored legalized same-sex marriage in 1999, 60% favor it today.

It might come as a surprise that only 3.8% of the American population identify as LGBT.  It did to me.  We are inundated with news stories and manufactured outrage from the left to such a degree that it really seemed that we were transforming our laws, interpretation of our Constitution, and our religious beliefs for a significant portion of the population.  But no.

Not that the tiny percentage makes any real difference in our own beliefs about states’ rights, gay “marriage,” and the assault on Judeo-Christian values, but the difference between our perception and reality speaks volumes about the effectiveness of the progressive far left.

Gallup first asked Americans to describe their views on social issues in 1999, and has repeated the question at least annually since 2001. The broad trend has been toward a shrinking conservative advantage, although that was temporarily interrupted during the first two years of Barack Obama’s presidency. Since then, the conservative advantage continued to diminish until it was wiped out this year.

The newfound parity on social ideology is a result of changes in the way both Democrats and Republicans describe their social views. The May 6-10 Gallup poll finds a new high of 53% of Democrats, including Democratic-leaning independents, describing their views on social issues as liberal.

I was genuinely surprised by these findings, as well.  If you had asked me whether I thought the number of Americans identifying their social values as liberal outnumbered those who identified theirs as conservative, I’d have given a qualified “yes” as an answer.  I do believe that America is still a center-right country, but the center itself has shifted leftward.  Therefore those of us in flyover country who make up the silent majority are shifting our own values to more closely match those of the progressive left.

Note that while there was a steady decline in the conservative advantage since polling began in 1999, that decline halted for the first two years of Obama’s presidency.  We all remember what was happening then and how effective the TEA Party was in amassing support and pushing back against the Obama agenda.  Indeed, we were so effective that the media, the progressive left, and a certain agency within the federal government were weaponized and used against us.  Successfully.

The unrelenting culture war waged by the left has had an impact in both real change in our society and culture and in a pseudo “psy-ops” that demoralizes and undermines our side.

Conservatives tend to internalize the left’s insistence that we are a minority, that we are the radical fringe who sputter in indignation as the world’s more “sophisticated” values take root and take over.  When I say that we internalize it, I don’t mean that we believe we are backwards-thinking radical fringe; instead, we begin to believe that is how the majority of our fellow countrymen and women see us.

We’re not only losing the culture war, but we believed we were losing it long before we actually were.

It leaves me wondering if too many of us sat down and shut up a little too soon.

Part of the problem with the chart you use is the term “social issues”.

Most of the posters here don’t even know how inclusive that term is, and some of them consider themselves hostile to “social issues” in supposed favor of some much more limited idea of “conservatives”.

But reality is that MOST issues are “social issues”. Like it or not.

Point taken, Rags. Gallup doesn’t include the specific questions asked in the poll, but the article they posted–and that I linked in the post–does note both gay “marriage” and legalizing marijuana.

This would seem to indicate a more narrow understanding of social issues than the broader, more theoretical one you imply.

That said, I would certainly agree that most issues are social issues, including fiscal ones. After all, most government policy impacts society in one way or another. In fact, I’ve made this argument before regarding legislating morality (almost all laws legislate morality, either directly or indirectly and to lesser or greater degrees).

Yep. What is “the welfare state” BUT a “social issue”?

We agree. We’re the sane ones!

Silly me, I’m so old, I remember when the Tea Party was about getting the fiscal situation under control and not taxing people to death.

No matter what liberals said at the time, and have repeated to themselves and others as an unrelenting mantra since, I don’t remember the Tea Party being just a bunch of unreconstructed WASP rednecks upset about abortion and gay marriage.

It’s as if the liberty Conservatives will host an event, works to get hundreds of people to show up, and before they can speak, the SoCons will rush onto the stage, knock the liberty Cons into the pit, and start preaching from the Bible and drive everyone away.

After the liberty Cons pulls themselves together, most of the audience has left, and no one is willing to listen to them under that banner.

Huh. What a bunch of pussies you “liberty Cons” must be, letting people do that to you with their bibles and all.

Maybe you should put up a few documented instances of how you let those bad, violent people do that to you.

‘Cause I’ve noted you lying a lot in these threads, and you kind of have a reputation for being “truth challenged” as a result.

“Maybe you should put up a few documented instances of how you let those bad, violent people do that to you.”

How about you document an instance where JWB’s knifing metaphor was taken to mean SoCons are “bad, violent people”.

in the word I live in, where words mean things, people who HABITUALLY stab others in the back, rush on stage, and push the folks who arranged a gathering off into a pit are sorta per force BOTH “bad” and “violent”.

I’ve been associated with the organic Taxed Enough Already MOVEMENT from jump.

And I’ve pointed out that it never has been a “party” about a million times, because it isn’t and really can’t be.

It has been a very heterogeneous, amorphous bunch of people, in my observation, and runs the gamut in political views from libertarian to deemocrat (blue collar type).

But I think we can say with some high degree of verity that it’s spine as a MOVEMENT is BIG C Conservatives of the Constitutionalist variety (who are not, themselves, homogenized in thinking, BTW).

A BIG GOVERNMENT that spends less is not a government any of us (I count myself as a Constitutionalist) would find amenable or acceptable. A FEDERAL government has no business dictating to the states what are state issues, for instance.

I’ll just note, again for the record, I am irreligious and come to my social positions from reason.

Kind of like Bill Whittle, who has been a very excellent spokesman for the TEA party MOVEMENT, articulating what are our most common values. Most of those SOCIAL values.

and start preaching from the Bible and drive everyone away.

Indeed. The Left, the press, Gallup, and the social conservatives work hard at obscuring the obvious and vital distinctions between social and fiscal conservatives. This latest effort from Gallup seems to be more of the same.

I dispute the validity of polls espousing leftward drift of the public.

I cite the 2014 election polls as evidence the left infiltrated pollsters which did not predict the total ass-kicking the liberals were treated to by voters.

Politics = Mega-Billions and Big Business has both political parties in their back pockets.

Yes, and now those pollsters will determine who participates in the Republican primary debates.

Only the national GOP leadership has moved left, intending to stay close to the right of the Democrats in order to score indy votes while assuming abandoned conservatives will vote GOP for lack of another choice. That’s the GOP dreamwish anyway. This didn’t work in 2008, failed again in 2012, and will fail again in 2016 if they shove Jeb Bush or some other big donor/big leadership yes man down the party’s throat.

At the state level things have hoved decidedly right, evidenced by repeated landslide wins for GOP governors and state legislatures. The GOP owns America on the state level.

American conservatism was established with the national charter, The Declaration of Independence, and national bylaws, The Constitution. The former acknowledges individual dignity and intrinsic value. The latter records two named parties: We the People and Posterity. American conservatism is an enlightened experiment in reconciling two imperatives: individual dignity and intrinsic value. It is a hybrid philosophy of classical liberalism (e.g. libertarianism) and Judaeo-Christian religion or moral philosophy.

That said, the problem with the equivalence movement (e.g. transsexual/homosexual) is that it selectively/arbitrarily excludes orientations and behaviors that do not support the narrative. The problem with pro-choice or selective policy generally is, in fact, that is exclusionary and unprincipled, which has a predisposition to create moral hazards. The worst example of pro-choice’s failure is the selective-child or rationalized premeditated murder (pre-legalization) of around one million [wholly innocent] human lives for causes other than self-defense, notably for wealth, pleasure, and leisure.

American conservatism preceded the national charter, The Declaration of Independence, and national bylaws, The Constitution.

Well, that explains why Obama’s numbers are up. (

It’s a funny time – and a very discouraging one, given our votes to the GOP gave us nothing but the scummy pair of McTurtle and Boehner.

The ‘Tea Party’ will ramp up again as the election is underway and its ‘members’ feel the charge led by Cruz, Walker and Paul.