We have covered the case of Emma Sulkowicz, the Columbia University student who vowed to carry her mattress around campus in protest of her alleged rapist who remained on campus. That alleged rapist was cleared by the University, and now is suing to clear his name.

I don’t know if Sulkowicz was lying or telling the truth. But the sharp dispute hardly makes the case comparable to what Afghan women have to go through. Beatings. Burkas. Lack of education. Executions.

Although the Taliban no longer control the entire country, the abuse has not ended:

So what possibly explains this tweet by U.S. Ambassador to the U.N. Samantha Power: 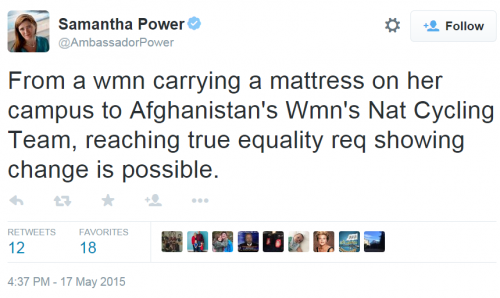 Is she really suggesting that Sulkowicz’s performance art (her term) on the Columbia campus is in any remote way the equivalent of the Afghan women’s cycling team overcoming threats in order to train?

Do women face obstacles on Ivy League campuses similar to women in Afghanistan?

Seriously, it would be too polite to call this a low information version of political correctness.

Self-hatred may be different from misogyny when mattresses are involved.

Does no one care enough about this woman to get her some psychological help?

You do mean Samantha Power, right?

Those in a position to do so need her as a political pawn for a while longer.

Both her parent are psychologists.

“So what possibly explains this tweet by U.S. Ambassador to the U.N. Samantha Power?”

She has the brains of a poodle? I mean, look at her head…!!! Too much line-breeding goin’ on ou-ed thar…

She’s creating gender-prejudiced leverage through narrative tweeting… formerly narrative spinning. It’s telling that they escalated the theme from intimidation to aggression. I think its a defensive move in response to progressive rejection of the pro-choice or selective-child policy — a wicked solution to a “wicked problem”.

Yeah, because being rejected by a lover is exactly like being beheaded for going to school.

Well, yeah, but the false rape accusations even things out. Right?

She harfed it as only a truly dedicated Obama flunky could.

“harfed it”, now that is funny, I don’t care who you are. And I’m going to steal it and use it with abandon.

It’s already in the Urban Dictionary.

Harfing
To say or assert something so patently stupid and preposterous as to generate widespread mockery. Named in honor of State Department Spokesperson Marie Harf.

The State Department Spokesperson was harfing on about how Islamic State jihadists only needed job opportunities in order to give up their evil ways.

I’d point out that the term ‘harfing’ was coined right here at LI last year.

I thought of expressing my outrage at such an insane analogy, but then it hit me:

Should we really be so shocked? This just shows once again that, if nothing else, she fits in perfectly with the other idiots in the worthless U.N.

From falling off a stationary bike on your head
to composing a tour de farce winning tweet,
reaching peak absurdity req showing
hope & change is pivotal.

It might seem that Amb. Powers is acting out a charade of little meaning yet it should also be obvious that Amb. Powers has little sense of what it means to live in the real world. Unicorns and lollipops are nice in a theater siting yet exist no else where.

What’s sad is that most proggies will eat her tweet up.

Powers demonstrates that she knows nothing about the treatment of women in strict Islamic areas. It’s not just cycling team training, it’s restrictions and abuse in every aspect of life, conditions the foolish woman with the mattress at Columbia has never experienced and never will.

Are you suggesting they Fluke each other over the head with a…..

Liberalism becomes Progressive only in the degree to which mental illness takes over.

You have to remember Powers’ position. She’s a progressive. That means anybody with half a brain knows she lies. Progressives think it’s cool. Those who are more honest already know she lies so one more example doesn’t make any difference.
The downside to being caught lying is, thus, zero.
But it there’s just one LIV out there who’s convinced, it’s a net gain for progs.
Since, as I say, everybody else already knows she lies.

Samantha Powers is nuts, and is in good company among the other lunatics in the Obama administration.

It’s just surreal they occupy the highest positions of power in this nation.

Just as surreal are the talentless, backstabbing cowards we tolerate to occupy the highest positions of power in the GOP.

Subtext: Women, all over the world, have the same or similar problems, and success one place shows success another place is possible.

And also people in the U.S. sympathize with Afghan women because they are all in the same boat.

A most becoming burst of sanity.

We used to have to prepare for college.

It is beginning to look like the college educated require preparation for the real world before graduation.

There is no objective ‘real world’. Discuss

Sulkowicz certainly has the lack of education part down.