A Mother’s Day call from Hillary?

A Mother’s Day call from Hillary?

Hillary wants to talk to your mom 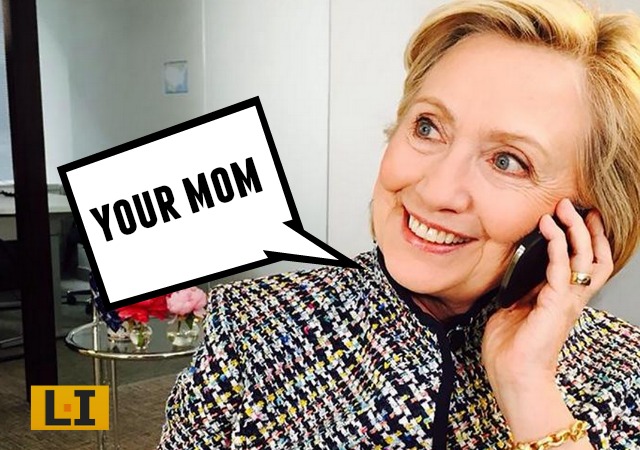 Forget about brunch, flowers, and sweetly worded, glitter-laden greeting cards this Mother’s Day. One lucky mother will get a very special surprise this Mother’s Day — a phone call from Hillary Clinton on your behalf!

Though it’s not clear whether that call will come from a Blackberry or an iPhone, or how many devices she has to choose from…

Taking a break from her grueling yoga-filled schedule, Hillary will set aside a few minutes to chat it up with your Mom.

Sign up for your chance to give a Mother's Day gift to remember: http://t.co/ZH0LnIKT9j pic.twitter.com/jrgXKtU83g

Just what every “mom you love” wants… a chat with this old chick from what appears to be a completely empty fake office!

Mother’s Day gift idea: a call from Hillary. Sign up for a chance to surprise a mom you love: http://t.co/vG0pZrbUbr pic.twitter.com/IveaxeVfs3

Apparently, she really wants to talk to your mom.

Hillary wants to call someone's mom on Mother's Day. It could be yours: http://t.co/Mvt75Gzj9c pic.twitter.com/1EbCQNXp14

Flowers? Pssh. Candy? LAME. Get your mom a Hillary!

Think beyond candy and flowers. This Mother's Day, get Mom a call from Hillary: http://t.co/6ea8mO09AA pic.twitter.com/3QQLvIHA4A

All you have to do is enter your information to be eligible for this unforgettable gift:

Want to increase your chances of winning though, and it’s gonna cost ya:

A grand total of five winners will get a phone call from the embattled, scandal-shrouded, Presidential hopeful and a bumper sticker. That’s right, a bumper sticker. Which might produce another awkward conversation thanks to Hillary’s digital team:

OK. But what if you don’t hate your Mom?

She’ll get more money this way than if she auctioned it off.

Is there such a thing as parent abuse?

I wouldn’t want to be cruel and subject her to Hillary.

Mum never did anything that bad to me!

Which would be worse, call from Hillary or dirty old man?

Perhaps the runner-up could get a call from Joe Biden.

Absolutely EVERYTHING in America is politicized.

What if your mom would rather Bill call and talk dirty to her? I understand women love that raspy voice.

I cannot imagine how this would go over. Is it going to be recorded so all can hear what a downright regular gal Hillary is, or are we only to hear one side?
It might be worth it to enter a lot of times and try and get the call and then prime “your mom” to ask why she lied about Benghazi.
Then again, my mom is in the Celestial Kingdom and I don’t think Hillary’s call could get through.

Since my mother has sadly passed away, forget any donation.

Odds are that it will be far more likely that my mother will vote for Hillary now than when she was alive and a staunch Republican.

Oh please – sign me up – I have an earful for her! (I can see how this could back fire unless they rig it, so it has to be rigged.)