A look at Hedy Lamarr and her “Frequency Hopping” technology.

My contribution, and one I intend to carry forward on future Memorial Days, will feature American scientists and engineers whose discoveries and innovations have helped our military men and women return to their families.

However, I would like to begin with a woman who was not a scientist, but whose World War II innovation still impacts our lives today and allows our service men and women to stay connected to home while they are on duty. 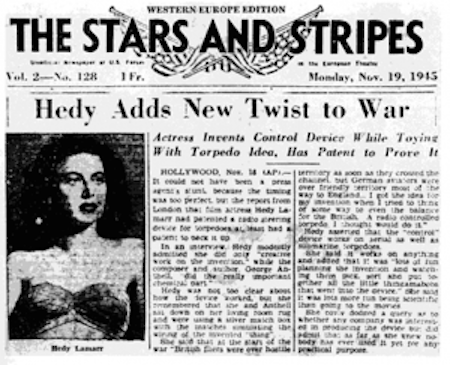 Hedy Lamarr was born Hedwig Eva Maria Kiesler in Vienna, Austria. After ending an unhappy marriage in 1937, to a wealthy Austrian munitions manufacturer who sold arms to the Nazis, the actress fled to the United States and signed a contract with the Metro-Goldwyn-Mayer studio in Hollywood under the name Hedy Lamarr. She became a big star upon the release of her first American film, Algiers, co-starring Charles Boyer.

The brilliant woman, however, recalled discussions of technology at meetings led by her former husband. During those meetings, the Nazi’s scientists had talked about developing detection devices to listen to, and jam, the radio signals that American aircraft and weapons used to communicate with one another. Lamarr wanted to jam those plans.

She teamed up with George Antheil, who was versed in the lastest sound technology, in 1940.

Between them, they had an idea. Allied subs, it seems, were wasting torpedoes. Ocean currents and evasive action worked against them. Lamarr and Antheil meant to do something about that. Lamarr, just 26, had been only a girl when she’d listened to her husband talking about torpedoes. She might have looked like pretty wallpaper, but she’d been a quick pupil. And Antheil had done ingenious early work with the technology of modern music.

The solution, they reasoned, was a radio-controlled torpedo. But it would be easy for the enemy to jam a radio-control signal. So they cooked up something called “frequency-hopping.” The trick was to set up a sequencer that would rapidly jump both the control signal and its receiver through 88 random frequencies. They patented the system and gave it to the Navy.

The Navy actually did put the system to use, but not in WW-II. Sylvania engineers reinvented it in 1957. The Navy first used frequency-hopping during the 1962 blockade of Cuba. That was three years after the Lamarr/Antheil patent had expired.

And as is often the case with innovations, the use of the frequency hopping technology expanded beyond anything in the 1940’s could have imagined. “Frequency-hopping” is the technical backbone that makes cellular phones, fax machines and other wireless operations possible.

As is the case with many of the famous women inventors, Lamarr received very little recognition of her innovative talent at the time, but recently she has been showered with praise for her groundbreaking invention. In 1997, she and George Anthiel were honored with the Electronic Frontier Foundation (EFF) Pioneer Award. And later in the same year, Lamarr became the first female recipient of the BULBIE™ Gnass Spirit of Achievement Award, a prestigious lifetime accomplishment prize for inventors that is dubbed “The Oscar™ of Inventing.”

This Memorial Day, it is comforting to reflect on a time when Hollywood offered this kind of support and assistance to America’s military men and women.

Leslie: not a bad idea to bring up those who contributed to bringing home our troops. You did well in your opening lines here, but be cautious not to lose sight that Memorial Day is to honor the fallen. Veterans Day might be a better day do do this great idea.
Just in the military alone, it takes 6-10 people to support the front line soldier. As you note, there is then all the civilian support, especially those who develop better technology and manufacturing methods. They deserve a ton of credit that is rarely given.
If I remember correctly, Hedy did some other pretty cool things also. Quite the woman and darn easy on this male’s eyes.

The machine that helped to win the war in the Pacific, more than anything else, was the IBM punch card machine — the forerunner of the modern computer. Without this machine, we would not have broken the Japanese codes that were used in the run up to the Battle Of Midway. The war in the Pacific would have gone much longer and cost more lives on both sides.

may want to fix your unnclosed tags. video it HUGELY wide

Thanks for your good eyes! Fixed.

Johnny Carson had a guest, maybe Bob Hope, who was talking about a “My Favorite Brunette” contest where the grand prize was a car. One entry that made it pretty far, according to the guest, was

My favorite brunette is Hedy Lamarr.
Just send her to me, and you keep the car.

Ah, when men were men and knew what they were fighting for!

The reason 88 frequencies were employed is that her system originally used rolls from player pianos.