Will Republicans get fair shake from John Dickerson at Face the Nation?

Will Republicans get fair shake from John Dickerson at Face the Nation?

2012: To achieve his goals, “Obama must declare war on the Republican Party.” 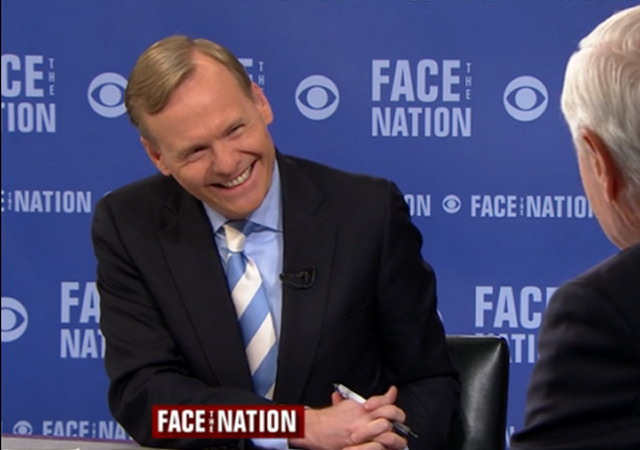 John Dickerson of CBS News has been named to replace Bob Schieffer as the new host of Face the Nation. Hadas Gold of Politico:

Dickerson’s first turn in the anchor chair will take place this summer, when Schieffer retires after nearly five decades in journalism, more than two of them as host of the Sunday news show.

“I couldn’t be happier,” Schieffer said on Sunday’s broadcast. “‘Face the Nation’ is going to be in good hands.”

Dickerson’s connection to the show and network is deep: His mother, Nancy Dickerson, was the first female correspondent in the CBS News Washington bureau and an associate producer on “Face the Nation.”

“I’m honored and really excited. Mom would’ve been excited too. She was an associate producer on this show on the very first airing on this broadcast,” Dickerson said.

Republican viewers are right to be concerned whether they can expect a fair shake from Dickerson.

John Dickerson, replacing Bob Schieffer as the new host of Face the Nation, will continue the same level of objectivity that CBS has brought to viewers for half a century. In 1964, when CBS was one third of all television news, Walter Cronkite and Daniel Schorr repeatedly smeared Barry Goldwater as a crypto-Nazi. His successor, Dan Rather, blew himself up in spectacular fashion with RatherGate in 2004, as dissected by all those bloggers in their Pajamas, to coin a Website name. In 2007, Rather’s successor, Scott Pelley, violating 32 flavors of Godwin’s Law in the same fashion as Cronkite, “was asked why he refused to include global warming skeptics in his reporting. He responded, ‘If I do an interview with [Holocaust survivor] Elie Wiesel, am I required as a journalist to find a Holocaust denier?’”, as NewsBusters noted.

Here’s the 2013 Slate article by Dickerson that Driscoll refers to above:

Go for the Throat!

Why if he wants to transform American politics, Obama must declare war on the Republican Party.

The president who came into office speaking in lofty terms about bipartisanship and cooperation can only cement his legacy if he destroys the GOP. If he wants to transform American politics, he must go for the throat…

Obama’s only remaining option is to pulverize. Whether he succeeds in passing legislation or not, given his ambitions, his goal should be to delegitimize his opponents. Through a series of clarifying fights over controversial issues, he can force Republicans to either side with their coalition’s most extreme elements or cause a rift in the party that will leave it, at least temporarily, in disarray.

Featured image is a screen cap from Dickerson’s Twitter feed.

Will Republicans get fair shake from John Dickerson at Face the Nation? Maybe when hippos fly but until then not a snowball’s chance in H…

Why is the question even asked? It’s CBS, home of “fake but accurate” news.

It’s a shame at this stage that we’re still asking questions about the media’s potential for good faith.

Because Dickerson is a more evolved, more honed and more vile anti-conservative militant than the merely biased boob Schieffer. This is the direction the media is headed — into greater and more rarefied reaches of viciousness. Because this is war. Rand Paul is at least getting it right about the media. They needed to be treated as the enemy — with the same contempt with which they treat us and all Americans. This is war, and to borrow Dickerson’s phrase, we need to go for their throats.

But that’s what we get from tolerating complete schmucks hogging GOP leadership positions.

Will Republicans get a fair shake? Of course not! Our self-anointed moral and intellectual betters at CBS don’t do anything as racist as real journalism.

Nevertheless you can bet that a lot of Republicans will trample each other in the race for their chance to be demonized and dehumanized on “Face the Nation”.

Will they get a fair shake? No, but that doesn’t matter. They will continue to go as beggars to the media seeking handouts of praise for compromising their principles, betraying their supporters and failing this nation.

Newt needs to get busy and start to train GOP’ers how to deal with the MSM types like Dickerson. Newt really did well during the early days of the 2012 GOP debate runup and put, especially, Scott Pelley, in his place.

Rand Paul also did well this past week dealing with those MSM Dem party boosters aka MSM.

There is no reason on this earth to allow the MSM’ers to define Republicans, none.

Further, I hope the entire Republican field takes the theme that the Democratic Party leadership as a whole has failed the voters, particularly Barack Obama, Nancy Pelosi and Harry Reid, but also the lying talking heads that endorsed BO as president. ANY of the Repubs would make a good president. They need to keep that in mind, as they point out what they as individuals bring to the party (pun intended).

I am sure he will be able to give you sexist racist greedy climate denying anti-science warmongering Christian birthers a fair shake. After all the is a classically trained professional journalist with the highest ethical standards with layers of editors and fact checkers supporting him.

It’s sad we’re not past this point in the conversation — that we’re still arguing with these people.

If a GOP candidate appears on this stupid show, he might as well appear on Putin’s American propaganda network, RT (Russia Today.) In fact, he might get a better shake on RT, or Bill Mahr’s show.

Republican candidates better learn quickly how to deal with the left wing media. NEVER tape an interview, only LIVE. NEVER talk about abortion, it’s a trap.

They ought to change the name to Face The Notion, that notion being full blown progressive liberalism. I’d also accept Mace The Nation, given what they do to the truth.