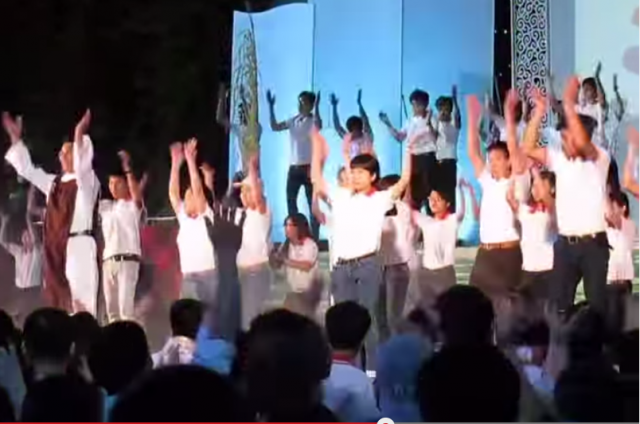 I mentioned in a post last night that when Anatoly (Nathan) Sharansky arrived in Israel in 1986, the crowd sang Hene Mah Tov, the lyrics of which start with Psalm 133:

It’s a traditional hymn. Here is the traditional melody I’m use to, though there are other melodies, like this folk version.

In my hunting around for video of Sharansky, I found this much more modern and upbeat version. The video is of a crowd of mostly young people in Vietnam dancing. Yes, Vietnam. In 2014.

I enjoyed it, I hope you will too.

Very coo! Looks like maybe a bunch of Catholic school kids led by their priest.

I remember learning the more traditional version in grammar school, but it wasn’t to waltz time!

I was one of about five kids in school on Jewish holidays at Warner Ave. Elementary. But we did learn a lot of folk songs…

Nice! The newer version being danced to is sung by the Miami Boys Choir, and can be found here:

I was about to post the same two links! For those who didn’t follow them, the first is the Miami Boys Choir recording which seems to be the one the Vietnamese are dancing to. The second link is to a group of former members of the choir, now grown men, singing the same song. It’s been a MBC standard for years.

I bet a guy $50 this morning that I’d never see the headline:

Well, that’s what I get for being faithless.

The General Synod of the Associate Reformed Presbyterian Church–a small conservative Presbyterian denomination–ends with the singing of this psalm. Our denomination descended from the psalm-singing Scots, and we still sang exclusively from the Psalter until I was a teen.

There are at least a dozen tunes to this verse, some of them even older than the one you learned.

Just sent this to four Vietnamese friends I had dinner with in Houston on Friday night. All were Vietnamese Army Officers and POW’s before coming to our country. I like the sentiment expressed in the verse.