A “Different” kind of candidate is his theme. 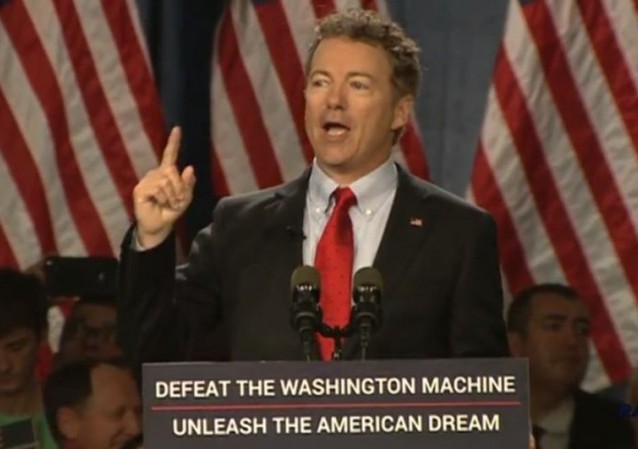 Rand Paul is rolling out his presidential campaign today, starting with a noon (Eastern) event.

If you missed the speech, you can watch it here. Twitter feed at the bottom of the post:

Impressed by the Rand Paul rollout. Slick & professional. A lot of energy. The vibe is that of a movement, not a campaign. #StandWithRand

Kelley Paul seems like she’s pretty good at this. 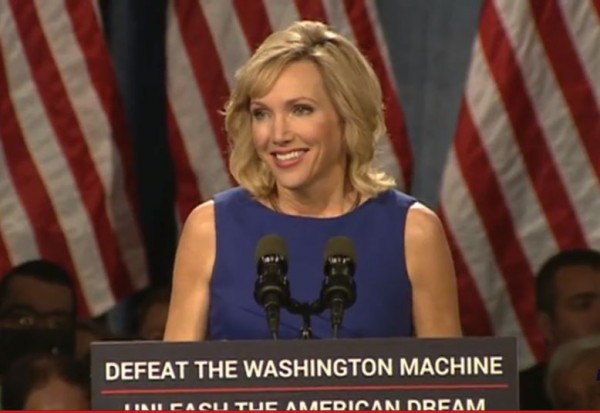 Rand Paul: "I have a message… We have come to take our country back." pic.twitter.com/V8amLfJ7KN

"A return to a government restrained by the constitution" –@RandPaul #StandWithRand

"We need to go boldly forth…[with] the Constitution in one hand & the Bill of Rights in the other." –@RandPaul
https://t.co/g6LW86jEjw

Rand: "The enemy is radical Islam, you can’t get around it"

Any deal between the U.S. and Iran should be approved by Congress!

Rand: "I would oppose any deal that does not end Iran’s nuclear ambitions and doesn’t have strong verification measures"

“Not one penny more to these haters of America.” @RandPaul

"My fellow Americans, the time has come for a leader who is not beholden to Big Pants." [cheers, pants dropping] pic.twitter.com/GhDV8Ha3dy

Bad color scheme. Bad optics. And photos of him in black-and-white?! He looks to severe, like an old-time dictator. (I won’t go there, specifically……but we all know the fascists’ and communists’ thing with black and red and white).

That gives the MSM up-front a way to attack.

Can you have an emphatic “meh”?

If so, put me down for one.

I’m not impressed nor does he inspire me. “Meh” is more emotion than I want to invest in him. Put me down for a “yawn”.

Gotcha down in the notebook. Glad to see, you!

There are a lot of people who will not forgive him for endorsing Mitch the Witch McConnell over the tea party guy.

This ‘campaign’ is a beauty contest in front of a mirror.

Paul is confounding. Looks good on paper, but… sort of thing. I struggle to put my finger on the exact problem(s), but…. yeah, meh.

I struggle with his endorsement of McConnell over a conservative, though I understand the political pickle that was for Paul. The best move would have been to endorse neither.

It shouldn’t count, but it does for me – the less I see and hear of Ron Paul, the better, and were Rand Paul to win the WH, father Ron becomes this generation’s Billy Carter.

For me, it was his popping off about Ferguson, and his “lean in” lunch with The Wrong Rev. Sharpton.

“Outreach” is one thing. PANDERING is quite another.

What really scares me are the Paul-ites! If those nut cases follow Rand around like they did Ron, I’m so outta here!

I share your sense of disquiet regarding the Paulians. They’re just a little too cray-cray for me.

But if they do, my stock tip is to go long on vinegar 😉
Ron Paul Supporters Spray Vinegar at the Sky to Fight “Chemtrails”…

Any internal combustion engine creates them.

B-17 crews used to hate them, because it gave away exactly where to find them to German fighter pilots. Just follow the pretty white plume.

I know 🙂 I used to troll the Paulians with all the contrails we get out here… they’re especially pretty at sunrise & sunset.

(I know, of course, but I spoke to what I actually investigated and wrote about. The ‘chemtrail’ claims I challenged involved nothing but big jet aircraft. The underlying conspiracy was it was the federal government doing something nasty to us all, and their view of our military is all big jets).

Hey! I just made the last payment to the Franklin Mint for my complete set of “Presidents Of The United States” in toast.

I’m afraid the Franklin Mint US Presidents In Toast series is a hoax. The Franklin Mint does not mint, um, toast. Bagels? Sure. But not toast. You’ve been snookered, old son.

If nothing else, I’ll get the marmalade.

I shoulda known. You couldn’t tell one Adams from another. I just figured it was an Adams Family thing…

The more public bashing of Obama and the democRats – and everything they squat for – the better. Rand Paul’s piling on is a welcome contribution.

But I read he is going to try to take out Ted Cruz first.

The Paulnuts are all up to their old tricks yet once again already. Spamming political polls, disrupting other conservative candidates campaign announcements and their town halls… the same old; same old. They remind me of years-long hibernating cicadas that suddenly spring forth all at the same time, on cue, about every four years to do nothing else but spread out across the land like a biblical plague and accomplish nothing else but making non-stop mind numbing irritating noise and distraction — ultimately achieving nothing else but littering the landscape with tons of their detritus and planting their young in the dirt near the end of election season to wait out another four years until it’s time to emerge once again, on cue, and do all the same crap they’ve always done all over again for the umpteenth time with the exact same results. Wash. Rinse. Repeat ad nauseam.

Creating confusion, causing division, stealing votes from actual potentially viable conservative candidates, and just making noise with concertedly planned out spectacles designed to do nothing else but troll the electorate — when it comes to chip-off-the-old-block Rand Paul and his exclusive gaggle of traditionally boorish rumpswab Paulnuts, we’re all going to have to take a ride on Daddy’s coattails with Rand until November 2016 to some degree every now and then. Non-stop irritating noise, nothing but tons of crap left behind, and nothing accomplished, whatsoever, but mucking everything up for viable conservative candidates — and breeding another generation of Paulnuts to propagate their utterly useless species. Yet again, election number whatever it is now, it is going to be one heckuva long year and a half for all erudite conservatives with those Paulnut idjits and their puerile slapdick antics.

And, the rub is, coattails surfing Rand Paul is no more nationally electable than his Daddy, Ron Paul, ever was, and he never will be. Daddy knows it. Rand definitely knows it. The Paulnuts know this too. They all know it to be true. Yet, they do it all over and over again anyway.

Saul Alinsky, wherever he is observing from, must certainly be highly amused.

This is what’s troubling — the potential for vicious subversion of the ultimate candidate if it’s a committed conservative.

Disregard him if you like but I’m all for pushing the right more towards individual rights instead of trying to make Big Government better.

You DO realize that’s an oxymoron, right?

It’s what the GOP thinks we should settle for:

Another kind of Republican. Sure.

Cruz has in IN FACT stood up the Washington machine.

I don’t know if I’d vote for him or not. I prefer Cruz or Walker. But I’m not going to bad-mouth Rand. We’ve got to stop eating our own.

I agree, will not bash him – but those crazy followers have to go!

I’m interested in Rubio, too. Not entirely convinced but want to see what he has to say. He is very quick on his feet and is likable. I’d like to see some interaction between Cruz, Walker, and Rubio. So far, no one else has really grabbed my attention. I love Ben Carson but he needs some experience with the media and the political machine or he’ll get eaten alive.

OK, speak up! Who down-ticked me?!! LOL! I didn’t know that was controversial!

He said he wouldn’t go there, and he did.

If I may be so bold, and begging our host’s and this community’s indulgence……

I’ve been considering a run for the presidency and would like to know if there is any support for me among the LI readership.

Hey, if you can manage to clear up those felony convictions and the complaints from the neighbors about “interfering” with their domestic animals.

I DON’T CARE WHAT THOSE GOATS SAY, I WAS ACQUITTED!

If you could just break that one doe from running up the hollar when she hears your voice.

Okay – WHAT ABOUT HIS SENATE SEAT?

Sorry for yelling, but no one mentions that KY law doesn’t permit running for two different offices at once. Rubio has the same problem in Florida, but Cruz is clear because Texas allows it (Lloyd Bentsen, for example).

There was talk the state party might move to caucuses to avoid the problem, but I’ve heard they won’t decide until August at the earliest. If they don’t decide to risk the expense (which Rand offered to help cover), what will he do?

Not a problem. Try to keep up.

So, the decision will be made this summer. I heard August. Your NewsMax report makes it sound like a done deal. Having been led astray by Ruddy in the past, I’ll wait and see.