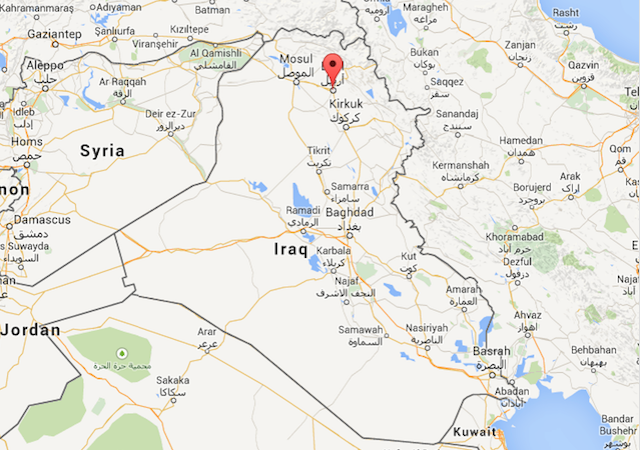 A car bomb exploded today outside the U.S. consulate in Erbil. According to the State Department, all officials are accounted for, but as of now no one has claimed responsibility for the attack.

There were no immediate reports of injuries to consulate personnel or local guards, the State Department official said. The Associated Press, citing one of its reporters at the scene, said that the blast set nearby cars on fire.

Talmadge Payne, an American working as a consultant for a non-government organization in Erbil, told NBC News that he was sitting on the roof of his hotel, about a half-mile from the consulate, and felt the blast.

“If I could feel the blast from here it must have been pretty significant,” he said. “The room shook, and a few things fell off the shelves.”

He said there was a firefight, then about 10 minutes of calm, then more gunfire.

Photos posted to Twitter show a sizable explosion that caused extensive damage and may have killed up to 3 people:

An explosion just went off followed by gun fire. Not sure what's up yet. pic.twitter.com/mxAAJSF1Xd

Footage of blast in Erbil #Iraq near US consulate, 3 dead http://t.co/2LpMs2Q40r pic.twitter.com/pGgmlBawlM

Massive car bomb outside the U.S. Consulate in #erbil
Gunfire. A second car thought to contain other militants. pic.twitter.com/LDhQLCIzVL

Hellicopters continue to circulate. Smoke clears and dusk is setting in. pic.twitter.com/xJHW5iaqtv

CBS News reports that at least one Kurdish official has already labeled this an act of terrorism:

Hiwa Afandi, a Kurdish government official, tweeted that the blast was the result of a “failed” attack on the consulate, claiming that guards confronted the bomber who detonated the device before reaching the consulate.

Hyundai Sonata detonated once the guards fired at them. They terrorists failed again

The last attack on Erbil occurred last November, when a suicide bomber planted himself outside the entrance to the governor’s mansion and killed 5 people. ISIS claimed responsibility for the explosion. U.S.-led coalition airstrikes in Kurdistan have since helped Kurdish peshmerga fighters beat back ISIS in the region.

As of right now, there’s a lot of conflicting information floating around about what happened in Erbil today. We’ll keep you posted with any updates as they become available.

ISIS has claimed responsibility for the car bombing via Twitter, saying, “were able to detonate a car bomb on the building of the American Consulate in the city, which led to killing and wounding many of them.”

Meanwhile, Hezbollah has launched blame for the rise of groups like ISIS and al-Qaeda on the actions of Saudi Arabia, saying that airstrikes in Yemen, for example, have led to the spread of Islamic extremism in the region.

Heeey, you may be on to something…. Maybe CNN did this bombing and is sticking it on ISIS?

Have they made any special effects hires from NBC…???

Iran does not have the nuclear bomb, but it has had the car bomb since approximately 1983. They also helped the predecessor of ISIS in Iraq.

First of all, I think they will attempt a technical analysis of the bomb, to see what signature it matches.

I don’t think that works in the era of the AutoPin.

There is an argument this was done by amateurs. The consulate was already protected against this size of bomb. To do real damage, they would have had to use a truck bomb.

Damn those amateurs! Suicide bombing should be strictly regulated so that only professionals from the Brotherhood Of Officious Makers (BOOM) engage in this technical field.

Hmmmmm………..Maybe we should sell GM to ISIS. Do we still own it?

My point was that it’s standard blog/journalism 101 practice that when you are about to post an article you’ve been working on that contains transitory assertions, such as, “Shooting In DC, Shooter Still On The Loose”, the last thing you do before you hit post is google to see if, in fact, the shooter is still on the loose.

That basic stuff doesn’t happen in this particular corner of the LI garden.