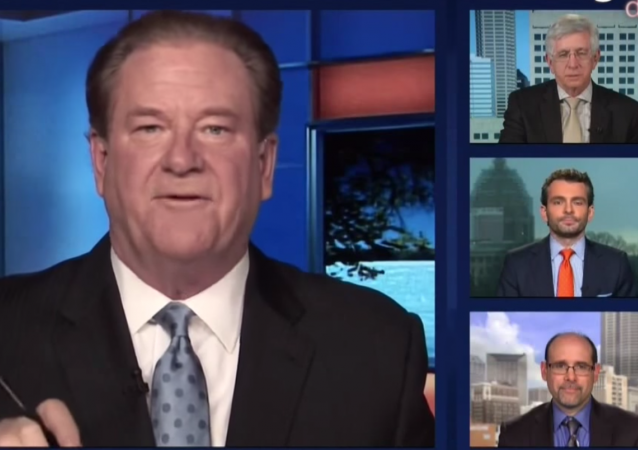 This perfectly encapsulates the RFRA ‘debate.’ Though I’d argue there isn’t really a debate, but a free for all slugfest of misinformation and demagoguery exacerbated by an ignorant, culture warrior class masquerading as Media.

Ryan Anderson of the Heritage Foundation joined Ed Schultz to discus Indiana’s RFRA law. Schultz however, was not prepared to have a discussion based on the factual merits of the law. Repeated attempts to evade honest debate left Schultz saying, “you’re telling me if I live in Indiana and I own that restaurant, I can tell them [gays and lesbians] to get the hell out of out of here, and you don’t think that’s discrimination? That’s the position of the right wing, correct?”

Anderson retorts, “I don’t believe that’s the position of the right wing. I don’t know anyone in this debate… please point to names of people who are saying restaurant owners should be kicking gays and lesbians out of their restaurants. You’re demagoguing them.”

At the point where Anderson reiterates, “you just slandered the Governor, you called him a homophobe,” Schultz has Anderson’s mic cut off.

Schultz is out of his depth in whatever puddle of stupid he makes his stand.

“Shut up, he explained”, is, like most Collectivists in rational argument, all he has.

Rats! You beat me to it!

More people saw it here than on MSNBC last night.

I won’t even see it here.

Sometimes it’s fun to watch the progs beclown themsleves and get completely owned in a debate.

But things are still looking grim for MSNBC: Between the hours of 12 p.m. and 4 p.m. on Monday, for instance, more people were watching Al Jazeera America than MSNBC’s Andrea Mitchell, Thomas Roberts and “The Cycle.”

I suggest a celebrity gossip format.
The current format is just too tedious.

Besides, you just can’t get enough of Justin Bieber and Miley Cyrus.
And, Zayn Malik left One Direction .. Oh Dear
Where is Chris Crocker when you need him.

Ed Schultz – can’t prevail in exchange, shouts down opponent, cuts off mic. That’s life under liberal fascism, a bit too much like the Queen of Hearts prevailing via “Off with his head!”

Liberals used to value tolerance and free expression. Now to please them, everything not prohibited must be compulsory.

Kimberlee, I really enjoyed chewing my way through this line:

(Don’t forget to Lean Forward. The maid will appreciate it after you’ve had enough.)

Do not think this episode was not planned well in advance.

Nor should you think it is a lone event.

This is merely a trial balloon for efforts to come, probably centered around the next elections.

The networks are being laid out and tested, along with the messaging, and the management.

Sadly, there is no real opposition.

Schultz did not cut off the man’s microphone. The segment was edited, granted, roughly, to make time for, um, Olympic coverage. I dunno. The NCAAs? Whatever. The point is that you did not see and hear what you saw and heard. Not on this channel.

MSNBC is beginning to resemble those political candidates who never get above the margin of error in the polls, their ratings amount to statistical noise and people who fall asleep while channel-surfing.

It began as an experiment to blend the features of online technology with cable TV. That failed, leading Microsoft to gradually pull out.

Now it’s just NBC News “Behind the Scenes,” and that’s not good.