The Unlikely Defection of Laurence Tribe

The Unlikely Defection of Laurence Tribe 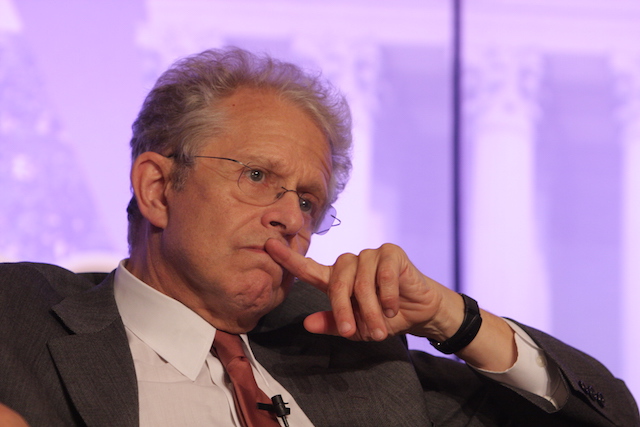 Say the name “Laurence Tribe” to anyone connected to the legal community, and you’re sure to get a reaction. Love him or hate him, Harvard Law’s Professor Tribe has made a name for himself as one of those fearlessly liberal legal scholars that we can always depend upon to be fearlessly liberal.

Well, except when he’s not.

Yesterday, the New York Times published a profile on Professor Tribe and his unlikely legal alliance with Peabody Energy. Peabody is a coal company that is working overtime to shoot down a controversial EPA regulation that would place a limit on CO2 emissions from coal-fired power plants. For environmentalists, the regulation is important because it forms the backbone of President Obama’s climate change agenda; if they lose this regulation, the plan loses its teeth.

Peabody retained Professor Tribe to argue their case against the EPA in federal court, and the reaction from the legal community has bordered on apoplectic.

To many Democrats and professors at Harvard, Mr. Tribe is a traitor. “The administration’s climate rule is far from perfect, but sweeping assertions of unconstitutionality are baseless,” Jody Freeman, director of the environmental law program at Harvard Law School, and Richard Lazarus, an expert in environmental law who has argued over a dozen cases before the Supreme Court, wrote in a rebuttal to Mr. Tribe’s brief on the Harvard Law School website. “Were Professor Tribe’s name not attached to them, no one would take them seriously.”

Freeman and Lazarus are serious in their criticisms. In their rebuttal, they characterize Tribe’s opinions on the EPA’s scope of power as advocacy as opposed to scholarship, and accuse him of acting as a puppet of the coal industry.

Anger from within the Obama administration about Mr. Tribe’s actions is particularly fierce, although officials declined to comment on the record for fear of escalating the situation.

“Whether he intended it or not, Tribe has been weaponized by the Republican Party in an orchestrated takedown of the president’s climate plan,” said one former administration official.

Thomas Reynolds, a spokesman for the E.P.A., reacted to Mr. Tribe’s brief by saying that agency officials remained confident in the legal arguments behind the regulations. “We have a recent record of court wins, proving our work is grounded in a sound understanding of the law,” Mr. Reynolds said in an email.

As for Tribe, he’s taking the criticism with class, saying, “I feel very comfortable with my relationship with Peabody. Somebody wanted my help and it happened to coincide with what I believe.”

I can’t emphasize enough how significant this backlash is in terms of legal scholarship. For better or for worse, Tribe is one of the foremost Constitutional Law scholars in the world. Progressive students worship him, conservative students are challenged by him, and everyone in between seems to have a hard time arguing against him. (I would always encourage them to try, though.)

I say “in terms of legal scholarship,” but this reaction really has nothing to do with legal scholarship. At least not practically. Tribe’s sin isn’t that he has floated a controversial legal argument; his sin is that he has publicly stepped out of line and dared to challenge the philosophical constructs of progressive dogma.

The idea that The Government© should not be allowed to do something to advance a progressive policy isn’t just controversial. In terms of academia, it’s apostasy.

I’m not an adherent to the majority of Tribe’s scholarship on the Constitution, but I’ll give credit any day to an academic who chooses to make the right argument, as opposed to the easy one.

So where is the link to the brief(s) he wrote? It sounds like they would be worth reading.

Can someone pass the popcorn please?

“Tribe is one of the foremost Constitutional Law scholars in the world. Progressive students worship him, conservative students are challenged by him, and everyone in between seems to have a hard time arguing against him. (I would always encourage them to try, though.) ”

Amy, this comment ranks about at the top of classy comments. A pat on the shoulder for you (pats on the back of females are dangerously ambiguous).

It’s also very true. Tribe carries a lot of weight, and his take on such issues often wins out.

Dershowitz isn’t of his high echelon in the pantheon of constitutional scholars, but he has also parted with Obama on issues of liberty, privacy, and Israel.

So at least some people on the left side are capable of intellectual honesty and consistency. How lonely it must be for them over there!

Liberals recognize that all parties are entitled to the representation of their choice, and that a classically trained attorney can and should be able to present the argument for either side of a given question, even if he privately does not agree with it. Liberals are known to rail at the notion that the hoi polloi disapprove of legal representation for the minority members of society.

So this is a really choice, and telling, incident. Whatever the hell these people think they are, or others say they are, they are not Liberals.

I, too, would be interested in a link to the briefs.

How in the world SCOTUS ever determined that CO2 could be designated “pollutant” I don’t understand. It seems that was a big coup over common sense and good science.

That was 2007. I don’t know what Tribe is arguing against, but he could easily show no warming as CO2 steadily climbed. Their silly models are broken now, and were really no basis for the insanity in the first place.

The Greening of America’s scrub ground, plus more bountiful harvests, happen with more CO2, not with more green party communists in our bureaucracy.

I think this is it:

but no gar and tee

Don’t you mean go here to see the briefing …

So, the hysterical propagandists finally found a “denier” who sold out to the fossil fuel industry.

Who would have thought it would be Laurence Tribe?

I suspect the liberal sycophants think “Tribe” is “off the reservation”.
OK Punny humor aside.
When King Putt is losing the liberal academics, his stretching of the consitituion has really gone too far. Our country was never meant to be run by an executive branch via fiat. Why does the EPA (a department of the executive) possess the power to write legislation and deem various natural occuring gases (CO2 is exhaled by all of humanity) toxic and therefore subject to regulation? The logical conclusion is that one can be deprived of life is his or her carbon footprint exceeds his or her contribution to society. Is that were you progressives want to take us?

“The logical conclusion is that one can be deprived of life is his or her carbon footprint exceeds his or her contribution to society. Is that were you progressives want to take us?”

That is precisely where they want to take us.

What is the difference between a left-wing “progressive”, and a rottweiler?

The rottweiler let’s go at some point.