Marco Rubio, the only other declared GOP candidate, has not signed (yet?) 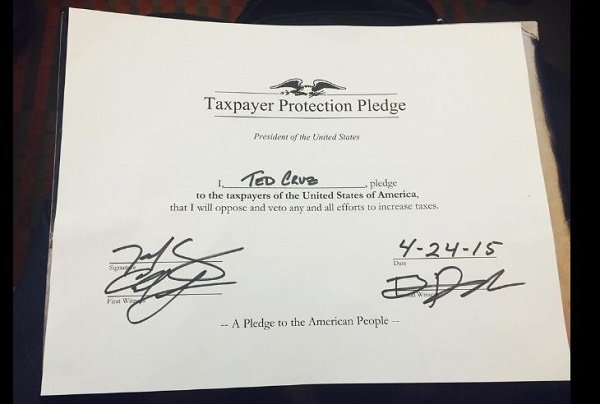 While I’m not a fan of Grover Norquist, I do appreciate his Americans for Tax Reform’s work each election cycle to get candidates on the record regarding tax increases.  It’s not the be-all-and-end-all, but it does indicate to voters where candidates stand in terms of big government and taxation.  The Hill reports:

The Taxpayer Protection Pledge is maintained by Grover Norquist’s group, Americans for Tax Reform (ATR), and has been signed by the majority of Republicans in Congress. The group says it has shared the pledge with all candidates running for federal office since 1986.

Signing the pledge could help the senators draw a contrast with former Florida Gov. Jeb Bush, who is expected to also launch a presidential bid and is considered a leading candidate for the GOP nomination.

Ted Cruz tweeted a photo of himself signing it to underscore his seriousness:

Proud to sign @taxreformer pledge as candidate for president so taxpayers can be assured I’ll do what I say I’ll do. pic.twitter.com/27PpPYUVhh
— Ted Cruz (@tedcruz) April 24, 2015

According to NBC, Marco Rubio, who signed the pledge in 2009, has yet to sign it, Chris Christie has never signed it, and Jeb Bush has said that he will not sign any pledges:

The only other Republican candidate in the race, Florida Sen. Marco Rubio, has not yet signed the pledge. He did sign it when he was running for the senate in 2009.

Cruz and Paul’s signatures is an(other) area where they have separated themselves from Bush. Bush’s spokesperson, Kristy Campbell, told ABC News in February, “If Governor Bush decides to move forward, he will not sign any pledges circulated by lobbying groups.”

While many Republicans sign it at both the state and federal level, Bush didn’t sign it as governor of Florida either.

As president, his father, George H.W. Bush, raised taxes after pledging during his campaign that he wouldn’t. He lost his re-election to Bill Clinton.

New Jersey Governor Chris Christie has also never signed it but Americans for Tax Reform, Norquist’s organization, says that Christie gave and kept a verbal commitment to follow it.

Governors Scott Walker, Bobby Jindal and Rick Perry have all signed and kept the pledge, according to Americans for Tax Reform.

Rand Paul has a new YouTube channel on which he provides position statements on a number of issues.  Here’s his statement about taxes:

A pledge from MANY of these people is demonstrably worth nothing. They have no honor, and they prove it at least annually. Some a LOT more frequently.

I’m still disgusted that Lynch was confirmed. There is simply no way to square that with an oath…which is a lot like a pledge…to the Constitution. It means nothing to me to intone bromides about a president having a right to “pick his team” when the members of that team are in outright defiance of the rule of law.

Now, on balance, the GOP has stood firm on MANY occasions when tax hikes have been attempted, but not enough times, and they SURE haven’t stood firm on SPENDING, which in some respects is WORSE since it provides benefits to people who don’t see the costs directly.

So, no. NOT impressed…yet. I have a lot more trust in Cruz than in almost anybody in DC, and I believe (hope) he’ll stay true to what he tells us. But I’m watching…

Rand is way down my list of “still maybe”. He’d be one of the last people in this field I’d send my cigar money, though certainly not THE last.

Worse yet is the cynicism. On the confirmation of Lynch, my new Senator Tillis voted “aye” on cloture, and then “no” on confirmation. (I voted for the other guy – Brannon – in the primary.)

I saw that too. I think Burr did the same.

The thing to remember about Norquist and the NRA is that they are valid only with respect to their single issue.

For example, the NRA has a policy of supporting the incumbent if it consider both candidates sound on the 2nd Amendment. This has led to the NRA consistently endorsing Harry Reid over all comes. Taxes and guns are important but we must never take our eyes off the gestalt. It is okay to consult them on that one issue while disagreeing them on all else.

Yes, exactly on the NRA. They endorsed Harry Reid six years ago which, not coincidentally, was when I left their “single issue” organization.

Screw the NRA. Endorsing Reid is tantamount to making guns illegal regardless of the filthy bastards stated position.

This is another thread which illustrates what I feel is a new, broad regard for politicians – liberal, conservative, whatever… very few can be taken at their word. Words mean little, tell me what you’ve DONE.