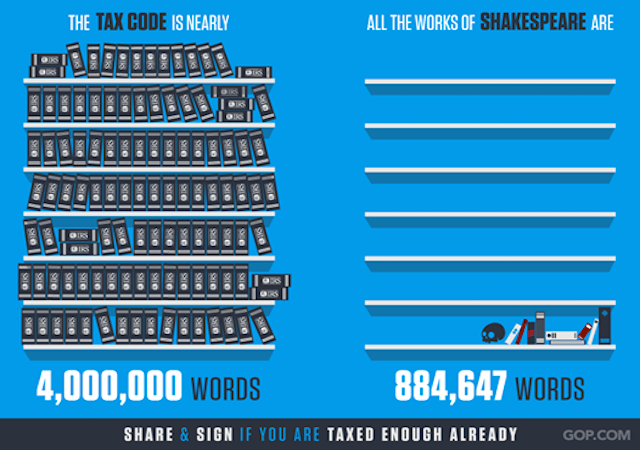 “Today is Tax Day, our annual reminder of how much of our hard-earned money is sent to Washington, DC, and spent recklessly by a bloated federal government. And now, ObamaCare has made Tax Day even more complicated for American families,” said Chairman Priebus.

“With Hillary Clinton running for president, Americans should realize that future Tax Days will be even more painful if she’s elected. Clinton and her party want to grow government and spend more, and that means they want to tax you more.

“If you want to keep less of what you earn, then Hillary Clinton is your candidate. But if you want the government to spend your money more carefully and let you keep more of what you earn, then the Republican Party is on your side. Even if we don’t agree on everything, you can agree with the Republican Party on this principle: government should use our money more responsibly and respectfully.”

A statistic that would have shocked The Bard!Pledge to say NO to any tax increase: http://gop.cm/618640wj

It’s a nice statement, and a sharp-looking graphic. I’d be proud to post it as part of a digital mini-campaign about taxes. But here’s the problem.

When it comes to talking about taxes, we need to start offering the “why” alongside the “what.” The reason is that, for all of their flaws, the Democrats are incredibly adept at using slick messaging techniques to explain away their tendency to spend more money than they’re taking in.

“But Amy,” you say, “this is common sense!” My response is that it should be common sense, but when it comes to politics, it’s never safe to assume that the people you’re trying to talk to will understand what’s motivating your half of the discussion. Dems have the faux-compassionate edge on us because, what Republicans try to “cut,” Democrats can then “regift” in the form of some new restoration of an “essential government program.”

In a word, their position—to spend, spend, spend—is much easier than ours. Fiscal responsibility is hard, and it’s even harder to talk about it without sounding like a puritan.

“The Senate on Tuesday rejected a Democratic plan to spend almost $500 billion on infrastructure using money raised by corporate tax increases, in a vote that displayed the sharp partisan divide over fiscal policy. … It would have added about $448 billion in direct federal spending over six years, and another $30 billion in funds for a national infrastructure bank and other methods of leveraging private-sector spending.”

Republicans REJECTED a plan to improve our crappy roads and invest in the private sector! Jerks.

Or this, in reference to the Sanders Amendment, which proposed almost $500 billion in new spending:

“The amendment, offered by Democratic socialist Sen. Bernie Sanders (I-VT), called for $478 billion in new spending over six years but without increasing the deficit.”

Wait, we can spend more money without going further into debt? Sounds like a dream scenario to anyone not really thinking about it.

Al Franken’s $89 billion tax increase sounds like a lot of money…but he had to do it because Republicans took our Pell Grants away.

Tammy Baldwin wants to raise taxes on rich people by $72 billion, which seems unfair…but if we say yes, everyone gets free community college!

I mentioned above that people “aren’t really thinking about it,” which seems like a disgusting frame of mind I’m sure to anyone reading this blog on a regular basis, but its the reality of the situation. There’s a reason so many college students rack up thousands of dollars in credit card debt, or why it’s so easy to spend juuuuuust a smidge too much after you get that tax refund in the mail. The reason is that, when the carrot of stuff “you can afford” is dangled in front of your face, it takes a pretty strong internal argument to turn away from the carrot and keep clipping coupons for your weekly trip to the Wal-Mart.

The RNC’s messaging today does a great job reaching out to conservatives who already understand this stuff, but it doesn’t really do much when it comes to grabbing the new group of individuals just starting to understand what “billions” of dollars really means. The Tax Code has 4,000,000 words, but isn’t the tax code supposed to be complicated? At least thorough—and 4,000,000 words seems pretty thorough.

This Tax Day, don’t feel put upon if someone you’re talking to about “big government” doesn’t get it yet—or even worse, doesn’t feel outraged when you start throwing around numbers in the billions of dollars. From the outside, this stuff is abstract; it’s funny money being tossed around by people in suits that eventually translates to a new road or lower copay (I joke!) If the connection between higher corporate taxes and paying more for a box of pasta at the grocery store hasn’t sunk in yet, don’t throw your arms in the air—explain it.

Conservatives are in the right when it comes to lower taxes and less spending—it’s time for the messaging to reflect that point.

You could put the works of Shakespeare into one small book you could hold in your hand. I bought one once for 10 cents (I think, or was that 35 cents?) at a used book sale. I think it has all the works. Moat of his works are the plays anyway.

According to this , the entire tax code is only 4 1/2 times as big.

What about all the tax instructions, forms and IRS publications?

Is your grasp of magnitude that poor?

A 4 fold increase in something that’s closer to 1 mil than half mil is a huge jump.

Go pick up your copy of the tax code and read it for us tonight. That’s your new homework.

Does this mean the GOP has started to acknowledge the TEA Party, or do they just use the idea when it’s convenient?

The TEA Party doesn’t have a monopoly on Taxed Enough Already. That idea also belongs to Libertarians, Objectivists and unaffiliated fiscal conservatives.

The government’s financial schemes begin with individual and corporate revenues, continue with [mis]-regulation, then on to excessive immigration that marginally compensates for abortion, and finally trillion dollar deficits (and reclassified funds) that warp the economy and devalue both capital and labor.

The Tax Code is used by the governing authorities to coerce certain behaviors in their subjects (us). Obamacare is a good example: sign up and get rewarded with a tax break, or don’t sign up and get punished with an extra tax.

Make taxes more like buying shares in a corporation. The more tax pay (shares you own) the move votes you get. If you don’t pay any tax you don’t get to vote on how money collected from those who do pay taxes gets spent. The more you pay in taxes the more votes and hence, the greater voice you have in how your money is spent.

It is all about fairness and the children.

The Tea Party and conservatives at large are doing quite well on messaging, thank you very much. We got all three declared GOP candidates into office.

Any messaging beef resides solely with the RNC, which ought not and cannot be conflated with the Tea Party or conservatives.

Why does it take 14 times as much shelf space to hold works that are, according to the numbers, less than 5 times as big? Just curious.

Fair enough. And given how inefficiently the US Code tends to be written out, it may not even be that inaccurate.

I was going to point that out too, but you beat me to it. Given the word counts, the images should be 7 shelves of IRS code vs 1.5 shelves of Shakespeare, rather than the half shelf depicted.

Let’s not give the leftists any ammo to declare that conservatives can’t do gradeschool arithmetic, or aren’t accurate/honest in their presentations.

I wish every single person had to do what I have to do every April 15th, write a check to the gov. Maybe then the “electorate” would figure it out.

Similarly, we could resolve the deficit and debt ceiling issues by requiring that at the end of each fiscal year, any federal overspending (deficit) was remedied by dividing the amount by the number of Americans and sending everyone a bill along with an “oops, we overspent, [signed] Congress” letter.

Last year’s bill would have been in excess of $4000 for every man, woman, and child, or much more if divided just among taxpayers.

The next election would be a bloodbath (presuming a literal one hadn’t taken place the day after the bills arrived). The new Congress would suddenly find a way to balance the budget.