“Does he try to minimize the carbon footprint that he leaves whenever he goes anywhere?” 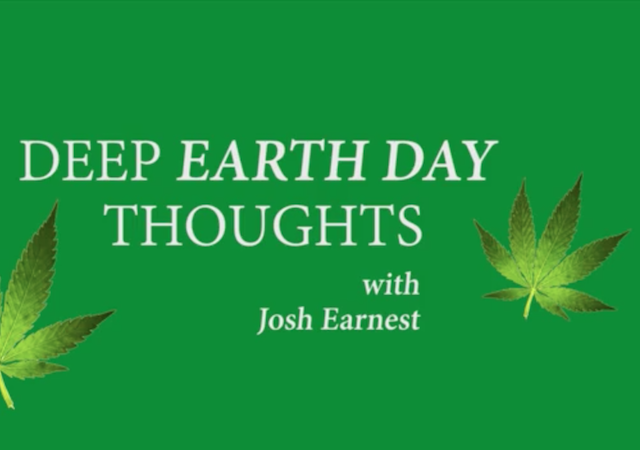 Happy Earth Day, everyone! Hope you’re all enjoying your…composting…and your…carbon offsets? I used aerosol hairspray today, so I’m not even going to pretend I observe this non-holiday.

President Obama does, however. Today, he boarded his private jumbo jet and burned down to the Everglades to deliver a blistering take on his political opponents who aren’t doing enough to stop people from flying their private jets everywhere. Also, something about protecting fragile ecosystems.

When asked about the jet’s effect on the environment, White House press secretary Josh Earnest crumbled under the weight of his boss’s sanctimony.

Here’s the transcript, via Rabble Writer:

MR. KNOLLER: On the Everglades trip, does the President risk undermining his message when he flies to the Everglades on a 747 hundreds of miles to make a statement about climate change? (Laughter.)

PEANUT GALLERY: He could drive. (Laughter.)

MR. EARNEST: But, no, he doesn’t. The President believes that there are important changes that we can make to reduce carbon pollution in this country, and we can do it in a way that will be good for our economy. That is precisely the case that the President will be making at the Everglades. And he’s looking forward to the trip.

MR. KNOLLER: Does he try to minimize the carbon footprint that he leaves whenever he goes anywhere?

In the scheme of things, this pressure probably won’t make much of a difference. Celebrities and politicos are going to keep using their private planes to jet off to destination speech venues to complain about things that harm the environment; but we’ll keep writing about it because every time we ignore the hypocrisy that runs rampant on the left is another opportunity for the left itself to leverage the husk of its ideology against conservative policies.

We can’t afford that—especially not with the elections just around the corner.

That answer would have sounded perfectly reasonable, if it had come from a Republican administration. However, the answer is really hard to mesh with an administration that has declared carbon* to be the greatest strategic threat this country faces.

*I do with these maroons would learn the difference between carbon, carbon monoxide, and carbon dioxide. The way things are going, they declare dihydrogen monoxide a pollutant, too.

“The President believes that there are important changes that we can make to reduce carbon pollution in this country…” so that he can continue to fly around in his big plane.

“I can say as a general matter that the Department of Defense has acknowledged that climate change does pose a national security threat to the United States.”

Yes. There are lying, cowardly, morons in every corner of the administrative state.

Until then, screw them.

Conference call? Bah! The links are absolutely SPLENDID this time of year in Florida!

It’s pretty hard to play 18 holes in a video conference.

I hope he mistakes a gator eyeball for a golf ball.

Carlin had it mostly right…

I wonder how many times Obama and Michelle have taken separate jets to the same location within 24 hours of each other?

They just did it to Los Angeles, and last year to Martha’s Vineyard for vacation. In each of those cases, there was only a couple hours difference in departure times.

Their sanctimonious advice is for us little people, I guess?

Imagine the unconscionable environmental footprint of a nuclear war started by Iran.

To Barack Obama & Val Jarrett-No more bribe offers, no more massive carbon footprints created from the back and forth of Switzerland meetings, no more footsie with a “death to America” enemy.

Use the big stick on the Ayatollah. Or, get the heck out of the way so that Americans can deal with Iran.