Today, we are *all* this student 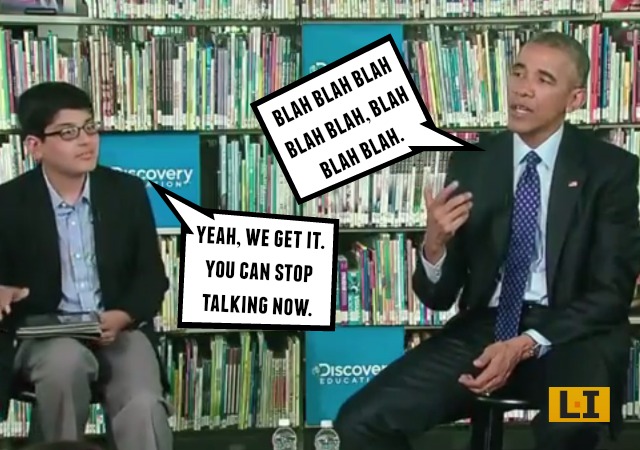 According to CNN, Obama unveiled a two-part plan to encourage reading in lower-income areas.

“The first part of President’s plan is to give young people better digital access to books,” CNN reports. The second part of the plan is the ConnectED Library Challenge. ConnectED’s goal is to put, “a library card in every child’s hand to ensure they have access to not only books, but public internet.”

“The event was moderated by a sixth grader from Salisbury, Maryland, who asked questions submitted by students across the country, some of whom were watching the event on a livestream in their classrooms,” reports CNN.

While Obama was discussing the difficulty of speech writing (though if he mentioned he has a staff of speech writers, it’s not contained in this clip), the frustration of writer’s block, and how terrible first drafts can be, this brave youngster said what we have all wanted to say:

We solute you, sixth grader from Salisbury, Maryland.

Video clip courtesy of the good folks at the Washington Free Beacon.

It’s pretty bad when even a sixth grader knows you are bloviating and not answering questions.

I hope that kid’s parents’ taxes are all in order. They’re probably about to score a grudge-audit from Preezy-B Peevish’s weaponized IRS department.

On the other hand, if anyone was still in any doubt as to whether Barry’s smarter than a 6th-grader…

The kid reminds me of a young Dinesh D’Souza.

Later that day, the IRS called his parents…

And the INS started sending subpoenas relating to a newly-opened investigation into their immigration status.

Smart kid, recognizes bovine excrement when he hears it.

The drone is inbound to the kid’s parent’s house as we speak.

Hope he’s read One Day in the Life of Ivan Denisovich – lots of useful tips for where he is going. http://amzn.to/1bkqpSG

So nice that the kids are willing to do the job that mainstream media is unwilling to do.

A paraphrase of Matthew 11:25 is appropriate here: “I thank Youtube for showing that the things hidden by the wise and prudent MSM have been revealed to us by the children.”

The bored look on the kid’s face tells the tale.

I teach writing. The cardinal rule to which all writers are advised to adhere: Be bold. Be brief. Be gone.

Excellent advice. Can be distilled to: ‘write tight.’

The first version of everything is pretty bad – – – like your presidency? When do we get the final version?