Scott Walker: Hillary is Out of Touch

Scott Walker: Hillary is Out of Touch 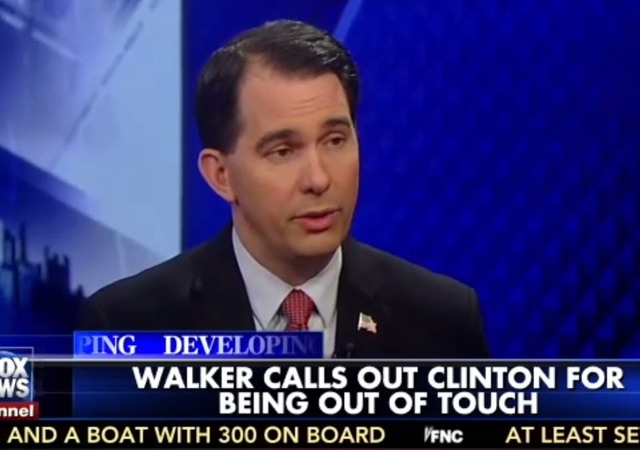 The first subject was Hillary Clinton, who Walker suggested is out of touch with the American people. Other topics included Walker’s strategy for winning independent voters in Wisconsin, the GOP’s prospects for 2016 and immigration.

Scott Walker’s name was in the news yesterday for another reason.

Charles G. and David H. Koch, the influential and big-spending conservative donors, appear to have a favorite in the race for the Republican presidential nomination: Gov. Scott Walker of Wisconsin.

On Monday, at a fund-raising event in Manhattan for the New York State Republican Party, David Koch told donors that he and his brother, who oversee one of the biggest private political organizations in the country, believed that Mr. Walker would be the Republican nominee.

“When the primaries are over and Scott Walker gets the nomination,” Mr. Koch told the crowd, the billionaire brothers would support him, according to a spokesman. The remark drew laughter and applause from the audience of fellow donors and Republican activists, who had come to hear Mr. Walker speak earlier at the event, held at the Union League Club.

Too bad Harry Reid is retiring, he could have spent the next two years shrieking about the Koch brothers.

Who doesn’t think Schumer will eagerly pick up the torch and start his own style of haranguing the Kochs? Especially if it gets him more face time on C-Span and the news broadcasts.

Looking and sounding very good. The Koch endorsement is huge.

It isn’t an “official” endorsement:

A couple hours after the Times story broke, David Koch clarified what he had really said. “While I think Governor Walker is terrific, let me be clear, I am not endorsing or supporting any candidate for president at this point in time,” he said in a statement.

Still, having a Koch brother think you’re terrific is a nice place to be in, as presidential contender places go…

They initially said Walker had the best chance of their short list, that they would support whomever the GOP candidate is, but that Walker is the best candidate.

Even the Kochs won’t be able to unring that bell.

Telling people what you’ll do, then doing it. Damn! It. Could. WORK!!!!

There’s a dark side to a competent, honest, can-do candidate – now, for the first time in a long time, we have to pay attention to what thuis candidate’s saying, because this sumbitch will say it AND do it.

We don’t need Harry Reid to harangue the Koch’s to the point of pathology. We have plenty of conservatives who are only too happy to pick up the torch.

The day Reid or Schumer rail about the pernicious effect of the donations by George Soros and his efforts to buy a United States Presidency is the day I will take them seriously.

Hillary’s Problem – out of touch,
contrasted with
Bill’s Problem – being too much in touch……