“Sometimes, there are people who like the status quo, even in our own party.” 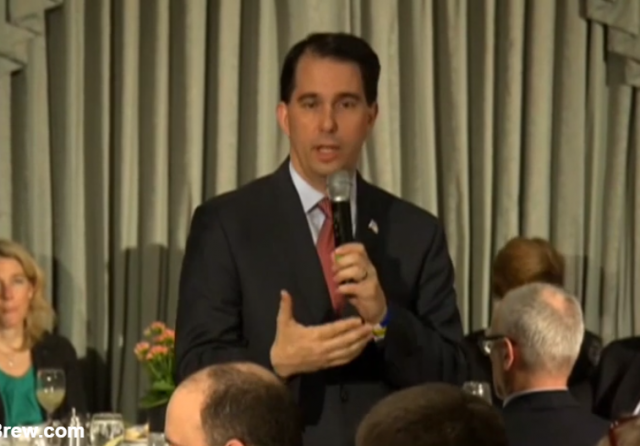 Scott Walker was the latest in the line of Republican candidates and potential candidates to address the New Hampshire Leadership Forum, in the nation’s first primary (Iowa is a caucus).

Walker guided the crowd through a brief history of his tenure as Wisconsin governor, punctuating the story with suggestions about what his reforms in back home might mean if he were to attempt something similar as president. “Washington is 68 square miles surrounded by reality,” he said, adapting a popular conservative appraisal of Madison.

Walker expanded the stump speech he had given in Iowa back in January, a coming out party of sorts, that propelled him to co-frontrunner status in national and early-state polling. The new content made clear that Walker is a hawk and that in a Walker presidency the United States would not only reengage with the world but would project its power without reservation. He called the war on radical Islam and “generational” war and scorched Barack Obama for his ambivalence on the threat. “We’re going to bring the fight to them and fight on their soil and not ours.”

Todd Beamon at NewsMax provides some highlights from the speech:

Walker noted how he took a $3.6 billion budget deficit he inherited and turned it into a $517 million surplus, has a fully-funded state pension system, reduced the ability to file frivolous lawsuits — as well as signed a concealed-carry law and right-to-work legislation.

“We no longer fund Planned Parenthood,” the governor said.

He referenced his battle with the unions over some of his reforms, leading to his recall-election victory in 2012 — making him the only governor in the nation’s history to survive such an effort.

“I got together in the capital with all the Republicans, those in office and the newly-elected,” Walker said, referring to shortly after he first took office in 2011. “I said, ‘It is put up or shut up.’

Scott Walker’s gratitude and Midwestern sensibilities are personal characteristics you won’t find in the other candidates. And, did I mention his record and his dedication to the Constitution? He has my vote.

This is a quibble, but he said “Tonette and I” a few times. Should be “Tonette and ME.” Hope someone in his group corrects him on this

“….Tonette and I and our family already had a family member who’s had a reception.”

Well, shoot! He has bad grammar? Guess I won’t be voting for him, then. [/sarcasm]

Seriously, if this is the worst critique we can find on him, he should be handed the nomination now.

(Then again, if reading Dr. Seuss during a filibuster is the worst thing the Left has against Ted Cruz, it’s going to be a tough decision between him and Walker.)

Walker has my vote as well, but someone correct that grammar!

That’s better than Barack Obama, whom, somebody evidentaly once told him when he was young, to be careful to pronoubce all letters in a word:

He is a good man I can be proud of supporting.

I really do hope he and Ted Cruz team up. They would make a great team.

I’m still a Cruz guy myself… but that was a humdinger of a speech, and I’m very impressed.

Is it sinful to enjoy having more than one candidate that I can support? It’s unusual, to say the least!

There is much to be said for actually having done the difficult things he set out to too.

That is much harder than just talking about it.

Walker was interviewed by phone on the Glenn Beck radio show this morning. Everything he said was rock-solid conservatism. It made it worth listening to Beck, if only for the hour.

Walker has all the right stuff to be the Republican nominee. He has a successful track record as a governor, he has run his campaigns well, he speaks well, and comes across much as Reagan did, a man who will call things what they are. He can unify the party. And his accomplishments in Wisconsin speak for themselves. Republicans have too many possible candidates right now, hopefully the number will shrink soon. By contrast, Democrats cling to Hillary and the alternatives for them are dismal, far left Warren, Biden, or who else?