Robert Downey Jr. is over your tendency to politicize everything

Robert Downey Jr. is over your tendency to politicize everything

The era of “politics-free” is over 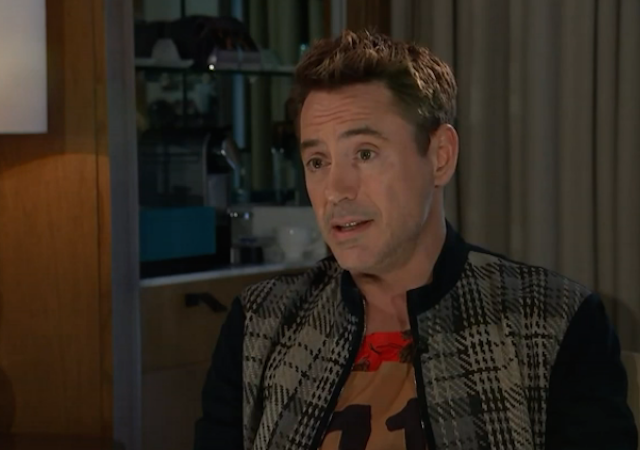 Last week, Iron Man and Avengers: Age of Ultron star Robert Downey, Jr. walked out of an Avengers promotional interview after British journalist Krishnan Guru-Murthy decided to dive into the motivation behind a comment RDJ made in 2008 about the correlation between incarceration and progressivism. Here’s the offending utterance:

“I have a really interesting political point of view, and it’s not always something I say too loud at dinner tables here, but you can’t go from a $2,000-a-night suite at La Mirage to a penitentiary and really understand it and come out a liberal. You can’t. I wouldn’t wish that experience on anyone else, but it was very, very, very educational for me and has informed my proclivities and politics every since.”

It was an ambush seven years in the making.

Here’s what happened when Guru-Murthy decided to go all 60 Minutes on the actor during what was billed as a superhero movie promo spot:

Are we not all Robert Downey Jr. right now?

Guru-Murthy defended his interview tactics, but unfortunately for everyone not on the side of Iron Man, RDJ defended his, as well. On a recent appearance on the Howard Stern Show, RDJ called Guru-Murthy a “bottom-feeding muckraker” and defended the idea that we should be allowed to promote a movie without getting hounded over politics:

Downey Jr told Stern he did not believe that promoting a film meant that he had to delve into his past. “There’s an assumption that … because you’ve sat down there [in the interviewee’s chair], you’re going to be scrutinized like a kiddie fiddler who’s running for mayor,” the actor said.

“What I have to do in the future is … give myself permission to say, ‘That is more than likely a syphilitic parasite, and I need to distance myself from this clown.’ Otherwise, I’m probably going to put hands on somebody, and then there’s a real story.”
…
Downey Jr added that the film’s family-friendly nature made Guru-Murthy’s questions inappropriate.

“I’m one of those guys who is assuming the social decorum is in play and that we’re promoting a superhero movie, a lot of kids are going to see it. This has nothing to do with your creepy, dark agenda that I’m feeling, like, all of a sudden ashamed and obligated to accomodate your weirdo shit.”

The actor said that walking out of the interview had been a stressful experience. “My heart’s beating in my chest, this is the first interview of the day: what do you think – are you in Kumbaya land?”

I’m cycling through all the stages of Election 2016 right now, and about a week and a half ago I hit “Hatred of Politics.” I’m exhausted by it—and that exhaustion really has nothing to do with the politicians. The worst part of increased engagement in the political process is that, for better or for worse, it all goes back to left and right.

Robert Downey Jr. has spoken at length in serious interviews about his past, his politics, and his time at the bottom of the barrel. Guru-Murthy didn’t bring up a quote from 2008 because he wanted an authentic interview; he brought it up because incarceration is a hot button issue, and “whose side are you on???” is an even hotter one.

This is what we call a blistering take on a non-issue.

I believe in the right to enjoy life free from the trappings of looming outrage. I believe in the importance of unplugging from the sausage grinder and watching a movie about men in spandex saving the world. But most importantly, I believe in supporting people who take a stand against the ridiculous crap that passes for a Hot Take© on a Pressing Issue©, when all anyone wanted was to hear about a fun, family-friendly movie that isn’t meant to offend or exclude anyone.

I did not know until the interview that Robert Downey, Jr. had been incarcerated, or that he’d used drugs, but after seeing his portrayal of Tony Stark and listening to his admission that Stark was based on his own personality, I am not surprised.

Tony Stark in the movie The Avengers is immediately recognizable as a boy I know. That boy has been on psychiatric drugs since I have known him, under various diagnoses as ADD with hyper focus (?!), bipolar disorder, and a touch of autism spectrum (vertical integration). He has a lot in common with Sherlock Holmes, both the original and the one played by Benedict Cumberbatch.

The kid I know is charming, brilliant, socially awkward, impulsive and energetic. In other words, he is a real handful for anybody who thinks a boy should conform to adult convenience.

If Robert Downey, Jr. really is like the kid I know, it is absolutely no surprise that he used drugs, because many of these kids self-medicate, if the doctors don’t do it, first.

What to do about these wonderful kids who are a handful is a serious, adult conversation that has nothing to do with promoting a movie based on a comic book.

That’s the brilliance of Marvel’s casting of Robert Downey, Jr. By casting him, it allowed the origin story of Iron Man not to waste screen time on the “Demon in the Bottle” story. At the same time, those who knew of RD,Jr’s troubled past with drugs invested his personal history into Iron Man’s.

That bold, brilliant move continues to reap benefits for Marvel.

The questions were absolutely inappropriate and out of context, and that was no accident.

The way the “bottom feeding muckraker” laughs as Downey is walking out reveals him and his team as genuine morons.

If he had stuck to the typical mundane questions of a movie promo interview bit, the interviewer wouldn’t have gotten all this free pub for the name Krishnan Guru-Murthy. It’s one way to move from backwater journalism bench to front row, if only while the viral lasts. Fame via gotcha.

He’s going to lose lots of interviews over this.

It’s a one-shot gun. He fired his load. People will be slapping him on the back for a week, and then they’ll have forgotten his name. But he still won’t be getting the opportunity to ambush-interview anyone in the future.

Au contraire – 99.9% of the other Hollywood stars are not non-liberal like RDJ. He’ll get more interviews. “You’re the guy that got RDJ, aren’t you? Love it!” Attacking a perceived conservative can be your ticket into Hollywood interviewing.

Most of the Brat Pack attended Santa Monica High School.

My fellow alumni Robert Downey Jr. and Rob Lowe have moved in a conservative direction over the years.

Sean Penn and the rest? Just as dumb as ever. My friend’s younger brother had a few classes with Charlie Sheen and dubbed him the stupidest person he’d ever met. I talked to Sean Penn once and there was nobody home inside his skull.

Good on Robert for pulling the plug on the interview.

It probably goes without saying, but any man who can properly work the phrase “syphilitic parasite” into an interview rightly deserves superhero status.

Olson Johnson: [after Gabby Johnson’s speech] Now who can argue with that? I think we’re all indebted to Gabby Johnson for clearly stating what needed to be said. I’m particulary glad that these lovely children were here today to hear that speech. Not only was it authentic frontier gibberish, it expressed a courage little seen in this day and age.

I love RD,Jr’s parting comment as he goes out the door, “You seem okay, it’s just getting a little Diane Sawyer.”

Next time, the interviewer’s chair should be equipped with a James Bond style “ejection seat“

RDJ did the right thing.

“The actor said that walking out of the interview had been a stressful experience.”
I imagine, but I also imagine it was liberating.

I can’t imagine anyone other than RDJ as Iron Man. When I heard he got the role, I knew he’d nail it, and he has not disappointed.

Actors who are conservatives should speak up- not to pump a political agenda, but so when we as conservatives wise up and start boycotting movies, we know who gets a pass.

I don’t care how good they are on film, when actors start running around spouting hate for my viewpoint- I’m not giving them a cent of my money.