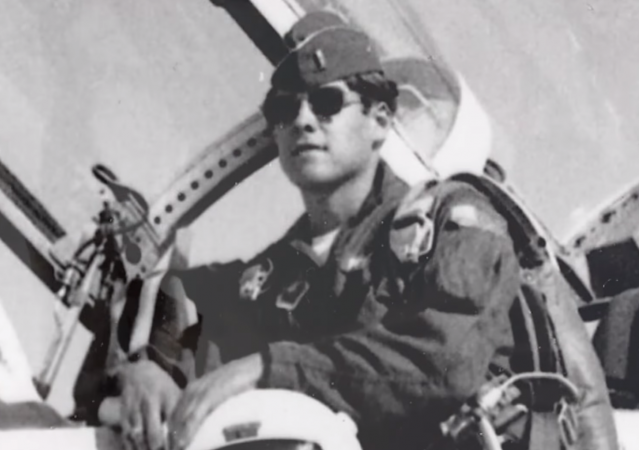 “As a former captain in the United States Air Force, I know the global good done by those who wear the uniform of our country,” Perry says. “I’m acutely aware of the sacrifice made by our soldiers, our sailors, and our marines.”

During college, Perry was a member of Texas A&M University’s ROTC unit, the Corps of Cadets. Upon graduation, he received a commission as an officer in the Air Force where he served for several years.

“…And I think the more important part of this is to articulate to this country as I did today the real challenge that we have as a country,” Mr. Perry said. “This administration is hollowing out our military. We do not have the capacity today to be fighting two wars in two different theaters today, and that must be addressed.”

“And that’s the bigger issue and I think the more important issue for the American people to really focus on is the next president of the United States is going to absorb this chaos that’s being created by this administration, so we need to talk about how we build our military back up, how we project the western values, if [you] will, how we protect our allies and how we send clear messages to our enemies that if you cross a red line, there will be a consequence,” he continued.

If 2016 shapes up to be a rare foreign policy election, Perry’s military background might work more to his benefit than anticipated.

He looks and sounds pretty darn good. Boilerplate, but good boilerplate. I hope he jumps in. 2012 is forgotten, governor. Try again. Competition makes all stronger. Except, you know, losers and sissies and stuff.

You know, in all the years I voted for him, I never knew about his Air Force experience.

I just liked where he stood on the issues and what he did to coyotes who messed with his dog.

Governor Perry did not just experience the military, he spent 10 years in the Air Force flying C-130’s. If there is a little known fact about Governor Perry, it is his absolute love for our military. How many other governors have taken in damaged military to live with them like Rick and Anita Perry did. Marcus Luttrell was not the only one.

If anyone in this race has a true warrior’s heart, it is Rick Perry and because of the disaster Obama has made of the world, people need to give Rick Perry at least a second look.

but, but, but……Marines should be capitalized!

Perry may have learned from his biggest mistake of the 2012 cycle: rushing his decision to run due to advisers’ perception of the timing. Had he waited until he was recovered enough from back surgery to get off the meds, he might well have entered a bit later when conservatives were looking for any viable Not Romney.

He will be viable if he gets in. The field is going to be bigger than it should due to the lack of an early consensus frontrunner, and Perry has his own national fundraising network. And a long track record of running a bureaucracy and supervising a budget, which several aspirants lack.

I’ve never held that one HAD to have military experience to be president, but…

I HAVE held that it’s a fine thing to have in a president. Especially one that follows the Obamic Decline, which has hit our military VERY hard.

Don’t know that he would be my choice for President, but a long slow climb could leave him as the last man standing.

Out of the Republican pack, he’s the only one who has attempted a national campaign. There ought to have been some lessons learned there the that rest of them have yet to encounter.

I love that there are so many conservatives running. The primary campaign will be a wonderful stewpot of assorted GOP conservatives like Cruz, Walker, Paul, etc. debating one another on the finer points, all in contrast with the moderate GOP candidates such as Bush, Christie, and whichever Rubio shows up. I do not think it will be the conservative agenda that takes the beating in this process.